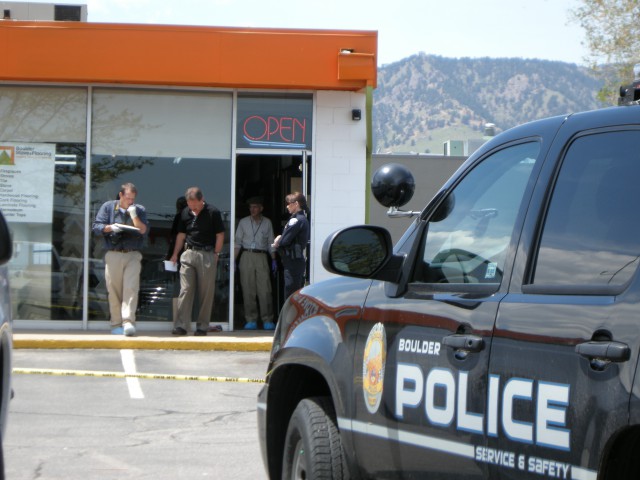 The husband and wife who owned Boulder Stove and Flooring were likely shot by a disgruntled employee who was mad about pay and who then turned the gun on himself, Boulder police say.

The three people who were found dead inside the store on May 17 were identified as owners Sean and Staci Griffin of Longmont and one of their employees, Robert Montgomery of Boulder, who had been employed by the store since 2003.

The Griffins appeared to have been shot multiple times, and Montgomery was found holding a gun and had a single gunshot wound to the head.

Investigators say the suspect was upset over a change in
sales commissions and a bonus payment system at the business. He had
spoken about his concerns with fellow employees and made written
notations in a journal and on his computer. The writings are still
being reviewed by investigators.

The business, located at 2887 30th St., is directly south of the Diamond Shamrock at 30th and Valmont.

Two people, believed to be a customer and another employee, were in a different part of the building at the time of the shooting and did not witness the incident, police say, but they reported hearing multiple gunshots. They then fled the business, leaving in the customer’s vehicle and calling 911.

The handgun was found in the suspect’s right hand, police say. It was a Smith and Wesson, M&P 9mm handgun. Thirteen spent shell casings were found near the scene, and one round remained in the chamber of the gun. No rounds were left in the magazine. The ammunition was Corbon 9mm brand. A second magazine containing 10 rounds of 9mm Eagle brand ammunition was located in the suspect’s backpack. Investigators say they believe the gun was purchased by the suspect on May 7 and that he recently practiced shooting with the weapon.

Boulder police said they had no record of prior contact with Montgomery by any of its officers.