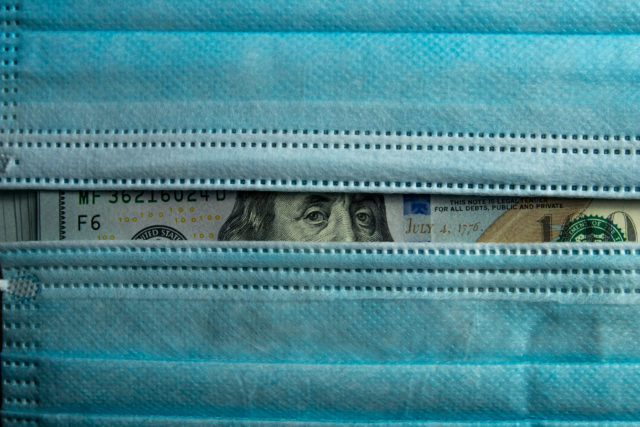 Since the beginning of the COVID-19 pandemic in the U.S., basic necessities like toilet paper and disinfectants have become not only rare, but expensive. Other items specific to this crisis, like digital thermometers and surgical masks, have seen prices spike by 50%. In some cases prices surged 166% for masks on online marketplaces, according to the U.S. Public Interest Research Group (PIRG).

Preying on the fears and anxieties of the public instances of price gouging, scams and other frauds have soared here in Colorado and across the country in recent weeks. Since Feb. 23, there have been 856 complaints filed with the consumer protection team at the state attorney general’s office. About half of those have been related to unrefunded travel expenses like airfare, hotel bookings and ski trips. But 330 have been about price gouging, a practice that isn’t specifically prohibited by Colorado law.

It’s something that Rep. Joe Neguse from District 2 in Northern Colorado is hoping to fix with federal legislation that would make a price increase of 10% during health emergencies and natural disasters illegal. Neguse, along with Congressman Ted Lieu (D-California) and Senators Kamala Harris (D-California) and Elizabeth Warren (D-Massachusetts), are hoping to include the anti-price gouging law in the next COVID-19 relief package, which Congress is expected to take up when it’s back in session starting May 4.

Price gouging “permeated the perceptions of folks early on and I worry that it has sort of faded from public discussion even though it is still very much a real issue that a lot of communities are having to deal with every day,” Neguse says. “As recently as this weekend, I saw something in doing my own research. When you go on eBay, you can see that basic cleaning products, sanitizing products are marked up 200 300, 400%. So, the price gouging continues and has really gone on unabated.”

Although Colorado revamped its Consumer Protection Act in 2019, the state doesn’t have an official price-gouging law on the books, like the one Neguse is proposing on the federal level. Across the country, liberal states like California and more conservative ones like Arkansas have such laws, but Colorado is just one of 15 states that doesn’t address the issue, a fact that surprised Neguse, he says.

Danny Katz, director at CoPIRG Foundation, a statewide consumer advocacy group adds: “It’s frustrating that Colorado is one of just a handful of states that does not have a specific price-gouging law that gives specific authority to the attorney general and the state to protect consumers in this crisis.”

Price gouging, Katz says, is more than just the normal market swing of prices related to supply and demand. It’s about whether there was an actual increase in production cost for any item and secondly, comparing historic prices of certain products to see if there’s a huge spike. In conducting its survey, Katz says, CoPIRG looked at items specifically related to COVID-19 to determine if price gouging was occurring.

“In any particular crisis, there are some things that suddenly become the thing that everyone’s told to get. After a flood, you’re not necessarily told to get a personal thermometer, but after COVID-19 you were. So that’s one place where we need to look,” Katz says.

He says CoPIRG has seen digital thermometer prices jumping from $17 to $27. Surgical masks that used to be $1 are going for almost $4, and toilet paper is priced three time its normal value.

“We don’t have a specially designed anti-price gouging law, but we have a catchall unfair and unconscionable trade practice law,” says Colorado Attorney General Phil Weiser. “I would, in the right circumstance, absolutely use our law and test its capability to address [price-gouging] situations.”

Weiser says his office could address price gouging reactively — addressing specific instances of price gouging as they arise, whether that’s by simply telling online marketplaces to stop allowing the practice, or by bringing some sort of case against sellers. But the attorney general’s office is also seeking proactive measures that would prevent the practice before it happens, and further protect consumers.

At the end of March, Weiser, along with more than 30 other attorneys general, urged Amazon, Craigslist, eBay, Facebook Marketplace and Walmart to use their technological prowess to stop price gouging before it starts and create an accessible fair pricing reporting system on their platforms. More than 300 state legislators from around the country, including representatives from Boulder such as Speaker of the House K.C. Becker and Senate Majority Leader Stephen Fenberg, followed suit with a similar letter circulated by CoPIRG.

“We believe online marketplaces do have a role and a responsibility in this because really that’s how a lot of people are purchasing things right now — going to those online marketplaces because we’re all stuck at home,” Katz says. “They have not done enough, we think, to identify those things before they get out there. And there’s more they can do to allow consumers to report this to them as well.”

Federal legislation, like what’s being proposed by Neguse, is also a way of keeping nationwide companies accountable. Although it would not be a criminal statute, it would allow the Federal Trade Commission and the Department of Justice to levy fines against violators and work with state attorneys general to do the same.

Weiser says he believes current Colorado law already allows him to take similar action. But, given that the parts of the Consumer Protection Act were only passed last year, it hasn’t been tested in the courts yet, Weiser says. And the current Colorado law doesn’t have a specific standard that qualifies price gouging, meaning that the courts would have to decide on a case-by-case basis how much of an increase is too much, whereas Neguse’s proposal has a 10% limit.

“For price gouging in Colorado, it would be difficult for us to make out a criminal case,” Dougherty says. “There are civil protections under the Colorado Consumer Protection Act and we could file a civil action to seek damages, restitution and an injunction. When it comes to price gouging, that would be the extent of it. But whether civil or criminal, obviously we take these complaints really seriously and we’re focused on these as a priority throughout this pandemic.”

Dougherty says Boulder County doesn’t have any open price gouging investigations at this point, but his office is working on open criminal investigations when it comes to scams related to the pandemic, prompted by residents’ complaints.

“Identity theft, fraud and theft are the three most common criminal violations that we see connected to any crisis, including this pandemic,” he says.

The circumstances of this particular crisis, where everyone is being told to stay home alone, makes people particularly susceptible to these schemes, Dougherty says.

He’s also concerned not every scam is getting reported as people are isolated at home and may not be aware that the DA and law enforcement are still working even though public buildings are mostly closed.

Weiser is also concerned about increasing scams, especially those targeted at older Coloradans, those awaiting stimulus checks and others marketing testing, cures and vaccines that are not medically proven (see sidebar here).

“There is, unfortunately, a huge opportunity for scammers to take advantage of people to prey on their fears, and in some cases on their hopes, and we’re just doing our best to educate people everywhere we can,” he says.

When it comes to price gouging, Katz says CoPIRG will continue to advocate for stronger consumer protection laws, including a specific price gouging statute when the state legislature returns in May.

“I’m pleased that our update to the Colorado Consumer Protection Act last year has enabled the attorney general to address some recent price-gouging schemes,” Colorado Senator Mike Foote (D-Lafayette), one of the main sponsors of last year’s legislation, said in an email statement. “I think there is room for more progress on this issue though, and I’m hopeful the Colorado legislature will give it further consideration upon our return and the U.S. Congress will pass Rep. Neguse’s bill as well.”

Although this particular crisis has highlighted price gouging throughout the country, Neguse argues that this legislation will continue to be needed far into the future. Not only could we see prices spike in other industries as the economic impacts of stay-at-home orders reveal themselves, but Colorado and other states are sure to experience a other types of disasters as climate change continues to make severe weather events more common.

“One of the central reasons we introduced the bill was to not only address the short-term need to protect consumers during this particular public health emergency, but to also ensure that we have a statute on the books that can be utilized during future emergencies,” Neguse says. “It doesn’t limit it to a public health emergency such as the COVID-19 pandemic, which is important because our country has experienced natural disasters of every variety before and we will again.”

To report price gouging, other fraud, or for more information about common coronavirus scams, visit the attorney general’s consumer protection section at stopfraudcolorado.gov.