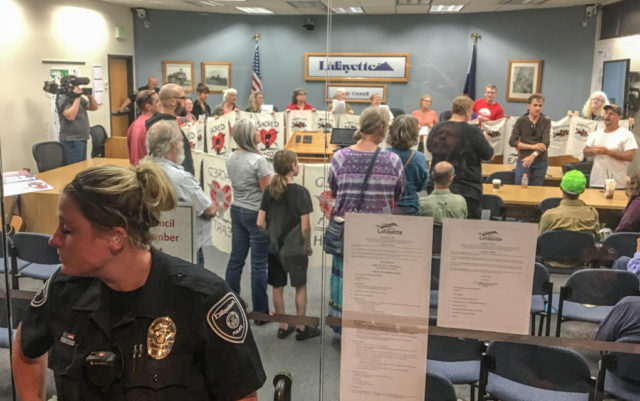 A group of about 50 protestors forced the Lafayette City Council to adjourn on Tuesday, June 19, before the Council could vote on an ordinance that would codify oil and gas regulations but not ban the practice within city limits.

The group circled around the meeting room and chanted, “No drills, no pipelines,” “Healthy climate is our right,” among other lines. More protestors chanted outside, as the room had reached capacity.

The Council quietly adjourned the meeting and left the chamber, with many Councilors heading to their cars. The protesters then filled the Council chambers and ascended the dais, singing and chanting.

“You know we’ve been saying for many years that fracking and oil and gas activity is a violation of the fundamental rights of the people of Lafayette, and we successfully intervened and rendered the Council unable to move those wells forward,” says Cliff Willmeng, an organizer with citizens group East Boulder County United (ECBU). “So you know we look at it as a first step. It’s unfortunate we have to resort to such drastic measure, but for six years the Council has, at best, ignored us.”

The ordinance would enact restrictions that mimic the restrictions Boulder County put on oil and gas operations. They mandate that oil and gas operators must receive a permit with the City (in addition to state and county permits), enter into surface area agreements with residents near operations, engage the community before constructing oil and gas infrastructure, and develop water, transportation and emergency plans for the City to review. The ordinance also puts a 150-foot setback for pipelines from buildings.

Those opposed to the regulations cited the Lafayette community’s desire to ban fracking as evidenced over several votes, and that language in the Climate Bill of Rights, which was passed in 2017, should effectively prohibit oil and gas operations.

The document codified citizens’ right to “a healthy climate and life-sustaining resources, which includes the right to be free from activities within the City that interfere with that right.”

However, critics point out, the ordinance reads that it will implement the Climate Bill of Rights “by enacting new oil and gas land use regulations that will be in harmony with the Act and the Colorado Oil and Gas Conservation Commission (COGCC) rules so as to allow the responsible development of oil and gas resources in the City,” which they say is impossible; Councilwoman Merrily Mazza says there’s no way to pass oil and gas regulations and also uphold the Climate Bill of Rights.

Mazza and ECBU placed blame on a Council they say is politically motivated to approve oil and gas operations, which was a sentiment echoed in the public comments of the meeting.

“Our elected local officials have refused to listen to us even though we have repeatedly demanded, and our town has voted for, an outright ban on fracking. The Lafayette Council majority has refused to defend the fundamental rights of Lafayette community members that people have repeatedly articulated. Regulations will do nothing to protect us. We are being betrayed by politically-motivated bureaucrats. We will now stand ourselves, as a people, and refuse to be drilled,” said Brooke Dryden, a Lafayette resident, in an ECBU statement before the meeting.

Mazza says that Council’s embrace of oil and gas regulations comes from “a void of local courage on the part of everyone on Council excluding me.”

Mazza says politics have influenced the way Lafayette’s Council has approached the oil and gas issue. She claims some Council members were eager to say they supported a ban on fracking while running for office, only to support the ordinance before Tuesday.

Mazza says it’s a betrayal of voters’ trust to switch positions, but that many residents can’t keep up with which Democrats support oil and gas bans and moratoria, and which don’t.

“There are a certain number of people who put blinders on,” Mazza says. “Some people … want to pretend that these regulations are going to keep them safe because that’s what the Council tells them and that’s what the Commissioners tell them.”

Two Council members were specifically targeted by ECBU and speakers at the meeting — Christine Berg and Gustavo Reyna. Reyna declined to answer several of BW’s questions after the meeting, and Berg did not respond to requests for comment.

Willmeng says there will likely be more action in the future if Council pursues oil and gas regulations, and that the group is setting its sights on the Boulder County Commissioners.

“It’s going to keep happening to the extent that the Council refuses to listen to the community,” Willmeng says. “We anticipate due to their prior record that one action is not going to persuade them to do anything different than they have for the last six years. I also want to emphasize, moving on from Lafayette, we’re going to be placing the same demand on the Boulder County Commissioners. We want them to place the Climate Bill of Rights to a vote this November. And the reason for that is quite clear: it’s because the local government is acting as brokers for the industry.”

If the ordinance is passed, there is still a question of whether oil and gas operators will take any issue with the regulations it entails. If an operator, say, doesn’t think it’s legal for the City to deny their permit for whatever reason — citing a well or pipeline is likely to be one contentious issue, as the state maintains it has jurisdiction over that — the ordinance states that theCcity “shall notify the COGCC in writing. If the COGCC fails to bring suit to enjoin any actual or threatened violation, then the City Attorney may file an action on behalf of the City Council seeking injunctive relief.”