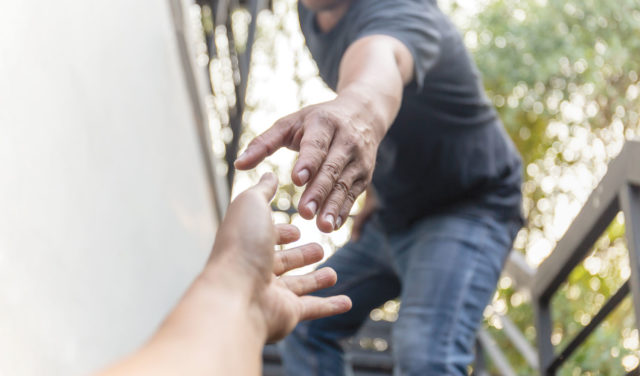 Victor King applied for his job at Mental Health Partners (MHP) on a handwritten note from the Boulder County Jail. He was in the transitions program at the time, taking classes and seeing counselors to help him prepare to reenter the community. One of the counselors told him about a job opening at MHP for a peer support professional, someone with a history of mental health issues or substance abuse who uses their experience to help support and mentor others.

“Peer support is going to meet someone where they’re at with respect and dignity,” King says. “Being able to connect with someone and really sit down and listen to them and be authentic, you know, creates a connection, which is important. It also shows people that hope is possible.”

King first came to Boulder in 1993 as a college student at the University of Colorado, but he quickly got into the party scene and eventually dropped out. When he experienced a loss in his family, he didn’t have the appropriate coping skills, he says, which led to substance abuse and bouts of homelessness, almost entirely in Boulder. The longest stretch was from 2010 to 2014, and he eventually landed in jail.

King wasn’t initially hired by MHP. He still had to go through the drug court program and finish his probation. Plus, he wanted to get his son out of foster care. In the meantime, he completed a five-day peer support training and eventually applied for the job again.

“When I first started working here, I was working with people from my past,” he says. “It was good for them to see my progress. Like, ‘Oh Victor is not selling meth anymore, he’s in here handing out bus tickets.’ Literally that’s the transition that I made.”

That was five years ago, and a lot has changed in the peer support field since King started. There’s increased attention for the role around the country, as research has shown it decreases psychotic episodes, substance abuse and depression, as well as reducing hospital admission rates, according to the Substance Abuse and Mental Health Services Administration. Peer support is also shown to increase self-esteem and provides a sense of empowerment. In Colorado, a state-wide certification process for peer support specialists was introduced in 2016 and training for peer support professionals has become much more rigorous.

For the most part, Colorado health providers, health care agencies and lawmakers see the benefits of peer support, especially since 70% of the state’s mental health care needs aren’t being met, earning a Health Professional Shortage Area designation from the Kaiser Family Foundation. New bipartisan legislation, which passed in the House Public Health Care and Human Services committee on Wednesday, Feb. 5, seeks to expand the settings where peers can serve. The bill also provides tax incentives for peer support professionals to continue their education both in and outside of the behavioral health field.

But peer support roles remain mostly entry-level positions with little room for professional development outside of getting an advanced degree. The cost of training and continuing education can often be a barrier for many who qualify for the role having experienced mental health issues and substance abuse.

The proposed legislation (H.B. 1139) would allow newly defined recovery support service organizations to be reimbursed for the work of peer support professionals through Medicaid. Currently, alternative services, like peer support, qualify for Medicaid reimbursement but only if provided by hospitals and community mental health centers like MHP.

“This bill would broaden the scope of those settings so that somebody providing care services can be reimbursed in a whole variety of different settings for which they are not currently qualified,” says Vincent Atchity, with Mental Health Colorado, one of the main proponents of the bill.

For example, Atchity says, a peer support specialist could be instrumental in an OBGYN’s office for perinatal mental health, or in primary care offices, or jails and prisons. But, currently Medicaid doesn’t cover those services. The legislation also includes a tax incentive for peers who want to continue their education both in and outside of the behavioral health field.

“For our organization, we’re trying to understand the fiscal impact and the cost of the bill, and then we’re trying to figure out what the new definitions for the peer support professional and the recovery support organization mean for the Medicaid program and for our existing peer workforce,” he says.

The bill limits tax credits to $100,000 per year, but, Cornelia says, there isn’t good state-wide data on how many peer support professionals would be eligible for it. Plus, CBHC wants to know how accountability will be built into the expanded services, and how it might impact the current peer workforce.

“How do we ensure quality and accountability both for Medicaid members but also for peers?” Cornelia says. “They want to expand types of settings … they talk about wanting to put peers in libraries or jails or primary care offices and that’s all well-intentioned. But they just need the right types of support and that’s peer supervision and clinical supervision as well.”

“I don’t think anybody’s advocating for unattached peers being reimbursed,” Atchity says, acknowledging the importance of a well-rounded care team when it comes to mental health and recovery. And the bill still has to go through both the Colorado House appropriations and finance committees to fully understand the fiscal impact. If the legislation continues to move forward, it’s going to take coordination between the Office of Behavioral Health, which will develop the criteria for recovery support organizations, and the Department of Health Care Policy and Financing, which runs the state Medicaid program, to implement. As Atchity says, that’s all just part of the process.

But the bottom line?

“We need more peers, we need more certified peers,” says King, who is now certified peer navigator supervisor at MHP. He also travels as a certified trainer, bringing peer support education and information to communities around the state.

“It takes a certain tenacity to go through those (mental health and recovery) experiences and come out shining. But it also takes a certain tenacity to say, ‘Hey, I want to work as a peer,” he says. “I want to be a peer support, where I can share my experience, where I can work with people and support them in a clinical setting, but in a nonclinical way.”

Through his work with the Colorado Providers Association (COPA), which administers the certification, King estimates there are less than 100 certified peers in the state. MHP employs 14 peer support specialists throughout the county, and there are a few job openings listed on its website.

King says when he first started, his salary was $10, hardly enough to make it as a single father. Luckily for him, he was able to join Boulder County’s Family Self-Sufficiency Program, and his father reentered his life after more than 30 years, providing some financial help. But he knows most people aren’t as fortunate and wants to see more opportunities available to his clients.

The training and certification process can be a barrier for many people with the qualifications to be a peer but lack the resources. Matched with a starting average salary of $13 an hour, it can be difficult for those coming out of recovery and mental health situations to see peer support as a viable career choice.

“How are you going to attract talent if you’re paying 13 bucks an hour and McDonald’s is paying $14, literally,” King says. “It hasn’t been made a viable career choice yet. It’s still this entry-level [position].”

And that’s if someone is certified.

There are only two or three training sessions a year, King says, which cost between $300 and $600. Certification costs an additional $295 and requires six months of employment, 500 work hours, 25 hours of supervision, a high school diploma and passing a 75-question exam.

“That’s a barrier for someone who doesn’t even have a job and wants to pursue a career,” King says.

Once someone does become a certified peer support specialist, there also isn’t much room for upward mobility within the field, King says. Most of the time, people are encouraged to get more advanced degrees and move out of the peer support role.

“It’s generally an entry-level position,” adds Amanda Bushek, a clinician with MHP and manager of its Boulder Adult Behavioral Health Home. “The future of peer support services, [needs] to have some ways for people to stay at those kinds of roles but have opportunities. There’s not a lot of room for advancement.”

Regardless of what happens with this specific piece of legislation, peer support professionals are becoming an integral part of health care teams in Colorado, and it’s a field that could benefit from additional resources.

“From a clinical perspective [peer support] can help our operations,” Bushek says. “It really helps us design things to truly be centered on who we’re trying to help. … It’s very effective to not just know what helps people from what our textbooks tell us.”

Plus, peers are more available than clinicians and counselors, King says. They work as “resource brokers,” he adds, noting they easily connect people to services they themselves once used. They can drive people to appointments, visit them at home, get to know their family and friends. So much of the work is just being present with people wherever they are on their journey.

“No matter how great my story is, it’s not about me, it’s about this person and their experiences and if they’re ready to get help. So sometimes I can show them those ropes and sometimes they have to find it on their own,” King says. “Part of the work is watching people struggle sometimes until they find that path and just being there as a support for them when they are ready.”