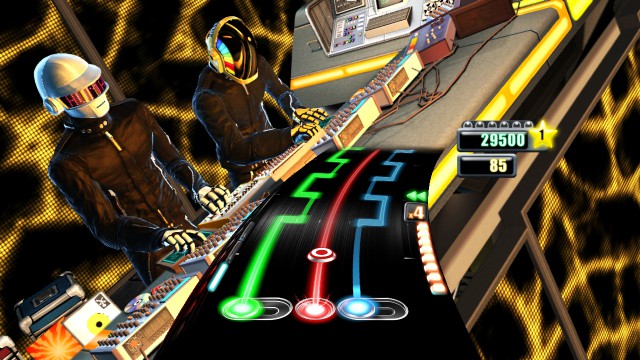 For the last several years the Guitar
Hero and Rock Band franchises have been ruling the music gaming genre.
But fans of hip-hop, dance and electronic have been left out in the cold.

Activision’s DJ Hero is looking to cater to that hip-hop and dance
audience that’s been itching for something of their own to play. But does it
live up to the hype?

The game begins with legendary DJ
Grandmaster Flash teaching you how to play the game. And while you quickly
learn what to do and how the game plays, it’s a whole other story when it comes
to actually executing the moves. The game has a very steep learning curve that
consists of not only hitting buttons in rhythm with the music but scratching
and crossfading simultaneously. It’ll take some time, and maybe a little
frustration, but once you get it down, it sticks. Once you get past the basics
of the game, the main venues and mixes are unlocked. There are also different
effects and sounds you can add to mixes while playing along with chances to
earn more points when the game goes into “Eurphoria,” similar to Guitar Hero’s “Star Power.”

The real star of the game however
isn’t the turntable controller, even though it’s super fresh; it’s the game’s
music that makes it worthwhile. The game holds more than 93 mashed up tracks
that range from Jay-Z and Eminem to Daft Punk and Rick James. Boogie Down
Productions is mixed with David Bowie, Gorillaz is mixed with Blondie, Herbie
Hancock is mixed with N.E.R.D. and dozens more. The music is so good, sometimes
you get forget that you have a game to play. As you move through the game,
earning stars and points, you unlock new venues, mixes, characters, gear and
other items.

While the life of a DJ is one that
consists of a lot of alone time in a DJ booth, DJ Hero incorporates a second
turntable and a guitar for multiplayer songs. While a second player on a
turntable can play on every song, there’s only a handful that are playable with
guitar. Hopefully some of the downloadable content will include more guitar
parts.

So will you learn to DJ playing this
game? You’ll probably learn as much DJing skills as you did guitar skills in
Guitar Hero. The game, however, will get you more interested in the DJ culture
and familiar with skilled real-life turntablists like DJ AM, DJ Shadow,
J.Period, and a host of others. If you can afford the $120.00 price tag, the
game is well worth it.