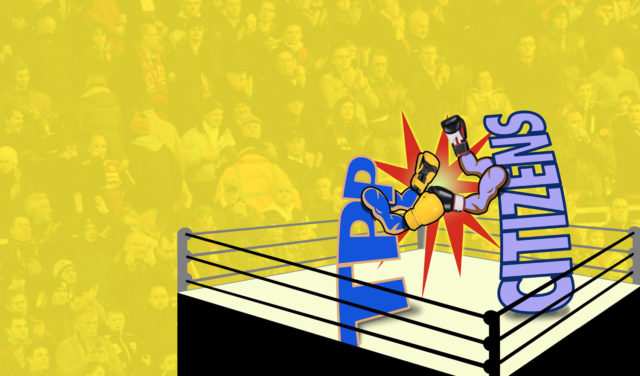 “The responsibility of the artist in troubled times… is to tell the truth as we see it,” — Tom Morello

As the legendary guitarist for Prophets of Rage, Rage Against The Machine and Audioslave, Tom Morello has previously taken a stand against poverty, police brutality, immigrant rights, racism, militarism and union busting. Now he is performing in a free multi-city roadshow featuring high profile performers and speakers to defeat the Trans-Pacific Partnership (TPP).

The tour kicks off in Denver on Saturday July 23 at 6 p.m. at the Summit Music Hall. It is sponsored by Fight for the Future, Firebrand Records, Communications Workers of America, CREDO, the Sierra Club, Friends of the Earth, Citizens Trade Campaign, Public Citizen, Demand Progress, International Labor Rights Forum, KGNU Radio and the Teamsters.

“Working people everywhere have had enough,” Morello says. “The TPP is nothing short of a corporate takeover of our democracy. That’s why people are rising up to stop it. Corporate lobbyists want to sneak the TPP through Congress quietly; that means it’s time for us to get loud.”

Golden Globe-nominated actress Evangeline Lilly will also appear. She is best known for her role as Kate Austen in the TV show Lost and her films have included The Hurt Locker, Real Steel, The Hobbit and Ant-Man. But she is also a cross-genre writer, who writes for multiple demographics, and is a published author of a children’s book series, The Squickerwonkers. Lilly has a background in international relations and political science and will lead a TPP teach-in on Sunday at the music hall.

“This fight against the TPP is not about right and left, it’s about right and wrong,” Lilly says. “Whatever you’re passionate about, whether it’s human rights, internet freedom, climate change, or food safety, the TPP is a bad deal for humanity, and a threat to the future of democracy. The more people learn about the TPP, the less they like it. It’s our responsibility to sound the alarm, before it’s too late.”

Why are a bunch of musicians getting involved in a political cause?

Tom Morello, in a recent op-ed in the Los Angeles Times, explained: “There has never been a successful social movement in this country that has not had a great soundtrack. Joe Hill’s union anthems put wind in the sails of those fighting for an eight-hour workday in the early 20th century. ‘We Shall Overcome’ steeled the resolve of Freedom Riders during the civil rights movement.

“Jimi Hendrix’s ‘The Star Spangled Banner’ channeled the moral cacophony of the Vietnam War through a Marshall stack at Woodstock. And one or two Rage Against the Machine songs were heard pumping in the streets as Starbucks windows were shattered during the Seattle anti-globalization uprising.”

There’s a more practical reason, says folk singer Evan Greer who will also be performing. She says that the TPP has been negotiated in extreme secrecy for many years and there has been a near-blackout of news about it in the corporate media. Nevertheless, many organizations across a broad spectrum of politics are opposing it and could stop it if enough ordinary people found out about it and protested to their congressional representatives and senators. “We need to quickly educate people,” she says.

Greer is the campaign director of Fight for the Future (FFTF), which is organizing the tour with Firebrand Records. FFTF is a digital rights advocacy group which, according to its website, “envisions a world where everyone can access the internet affordably, free of interference or censorship and with full privacy.” Greer told me this fight is tougher than previous FFTF struggles. When his group fought for net neutrality and against government surveillance, they had the support of some large corporations. But they are fighting “every large corporation in the world” when they oppose the TPP.

Both Hillary Clinton and Donald Trump have said they oppose the TPP deal. President Obama was able to steamroll a vote to provide presidential fast-track authority for the bill, which means that if and when he sends the bill to Congress, there will be little discussion and absolutely no amendments. It would be just a “yes” or “no” vote. The fast track was passed in June 2015 with the support of Senate Majority Leader Mitch McConnell and Rep. Paul Ryan, the subsequent House Speaker. A majority of Republicans voted for it and most Democrats voted against it.

Among the minority of Democrats voting for fast track were two Coloradans, Senator Michael Bennet and Congressman Jared Polis. Colorado Democratic Representatives Diana DeGette and Ed Perlmutter voted against it, however, they haven’t committed to defeating the TPP. Polis claims he hasn’t decided. The FFTF campaign is determined to get as many members of Congress to commit to voting against the TPP.

Obama says he wants to get it passed in the upcoming lame-duck session which follows the November election. That is a time when Congress will be freer to ignore the public’s concerns, and the president-elect could also then change his/her campaign position on the TPP, a very real possibility if history is any indicator.

The coalition against the TPP is impressive. The entire labor movement opposes it because it would further export jobs to low-wage countries. Environmental groups anticipate attacks on environmental laws and energy policies under the deal’s Investor-State Dispute Settlement (ISDS). Internet-freedom groups are angry about the intellectual property chapter. Health care and senior organizations — including nurses’ unions, AARP and Doctors Without Borders — feel the TPP would imperil affordable medicines by possibly banning generics and disrupt current and potential progressive health care policies such single payer. Some right-wing groups oppose the TPP because they believe it threatens U.S. sovereignty through ISDS and existing international bureaucracies.

There have been huge demonstrations against the TPP in many cities but not much news coverage. This near blackout of information can be explained by the fact that most mainstream news organizations are owned by major corporate conglomerates that favor passage of the trade deal.

Colorado activists against the TPP have been fighting for years. Laura Avant, who is involved with the Progressive Democrats of America and Occupy Denver, says the movement in Denver has had several marches emphasizing “TPP Equals Betrayal.” She has visited the offices of DeGette, Bennet and Perlmutter quite a few times.

In Boulder, many people have engaged in the cause with the Rocky Mountain Peace and Justice Center as one of the principal opposition leaders. There have been sit-ins at Congressman Polis’ office as well as meetings with the congressman and his staff.

There have been many public demonstrations and debates and forums and letters-to-the-editor and op-eds opposing the TPP.
On January 8, 2014, the Boulder County Democratic Party passed a strongly critical resolution on the TPP as well as the Trans-Atlantic trade agreement which is also being negotiated at this time.

On April 17, 2015, a group of 13 elected officials from Boulder, Longmont and Fort Collins sent a letter to Polis urging him to vote against fast tracking the TPP. They expressed concern that the TPP would threaten votes by Colorado cities to protect health, safety and property from fracking as well as Boulder’s attempts to take control of its energy future and Fort Collins’ recent adoption of an aggressive carbon reduction plan.

Nevertheless, Polis voted for fast track and although he says he hasn’t decided on the TPP vote itself, he has given numerous indications that he favors it.

Boulder activists have gone before the Boulder City Council many times as well as the Boulder County Commissioners in an effort to get formal statements opposing the TPP. They have yet to succeed. They have also picketed the Boulder County Democrats’ annual Harry Truman dinner for two years. They have likewise appealed to the state legislature for a vote creating an anti-TPP resolution. They have visited the offices of 60 representatives and say they have received positive support from many including some Republicans. However, they have yet to get anyone to sponsor a resolution.

Polis was challenged in this year’s Democratic primary on his TPP position (and other issues) by Boulder activist Steven Todd, but his “write-in” campaign started very late and was virtually invisible. Cliff Willmeng is running against Polis on the Green Party ticket and says the TPP is an important issue for him. Willmeng is a Lafayette nurse who is a progressive and longtime labor activist.

The goals of the anti-TPP movement are two-fold: mobilize the many who agree with their stance on the trade agreement but who haven’t been protesting, and additionally, to educate people who are unaware of the many negative impacts that would accompany the passage of the TPP.

Those opposed to the TPP say they are optimistic they can stop the passage of the trade agreement and they may have good reason for being so. They can look back to past anti-trade victories such as when The Free Trade of the Americas was defeated by an intercontinental movement in 2005 and the Multilateral Agreement on Investment was killed by activist opponents in the 1990s.

That is why on July 23, Summit Music Hall will be filled with both hope and great music. As Tom Morello is fond of saying, “The world ain’t gonna change itself. That’s up to you.”

For more information on the TPP, check out Public Citizen’s Global Trade Watch here and the Eight Terrible Things About the TPP here.

In the original version of this story, Evan Greer was referred to by the pronouns he/him/his. Greer uses the pronouns she/her/hers. We understand the gravity of this mistake and extend our apologies to Greer.