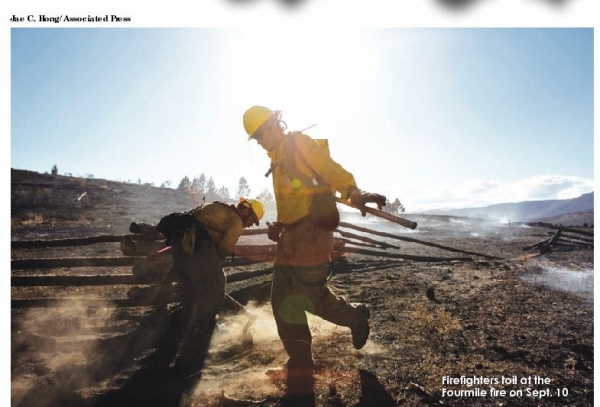 For Eli Koehn, Colorado Mountain Ranch in Gold Hill and the family that own it are more than just employers. They’re like family.

So when Koehn heard the property was on the edge of the Fourmile fire, he knew he couldn’t stand around idly and let his beloved ranch burn down. Police had already closed down most of the roads into the ranch, but for Koehn, that just meant he had to get creative.

It’s an unusual problem for law enforcement — keeping people out of disaster areas. But the severity of the Fourmile fire prompted some homeowners and others to to break through police lines so they could fight in some way to try to protect their homes.

“I know there’s people that got up there,” Brough says. “Some people know that area very well and can hike up. … We don’t have the resources to treat it like it’s the border or something like that.”

Koehn, who did maintenance and other chores on the ranch for four summers, drove up into the mountains looking for a way into the ranch that hadn’t already been closed. He eventually ran into a checkpoint where several other “kindred spirits” were trying to find ways to get up to the ranch. Knowing the woods as well as they did, they snuck off into the forest (“as if we were taking a piss,” Koehn says) and bolted towards the ranch. When they arrived, they joined owner Mike Walker and strapped on five-gallon water sprayers, which they filled by hand, and started to put out hot spots and small flare-ups.

“Yeah, and for most of the time we were hiding from the sheriffs, because they didn’t really appreciate us breaking through their roadblock,” Koehn said. “I feel like we made a difference. I’m very proud of it. … The ranch is like family to me. They’ve stuck with me through good times and bad, and it’s like my home. … The Walkers are exceptional.”

Holly Bender, who lives in the old Sunshine town site at 1332 County Road 83, says a few of her neighbors may have helped save her house from burning down as well.

Bender explains that communication about the fire has been a lot like the game “telephone,” because accounts have gotten distorted in the retelling. She and her neighbors held a meeting on Sept. 12 and began to piece together the events of the previous week. That meeting gave her a chance to talk to at least one of the neighbors who likely helped save her home.

She told Boulder Weekly that none of the three neighbors are firefighters — two simply declined to evacuate and stayed behind to defend the houses.

The third neighbor, Bender says, drove his family to safety and was coming back to his house to get another load of belongings when he ran into the other two neighbors and decided to stay as well.

The three used shovels to put out sparks, she says, “and as it was, they were able to save quite a few houses.”

But Bender adds that with the intensity of the fire, they were lucky it didn’t set its sights on them.

“Five acres went up in five seconds,” she says. “If the fire had decided to go where they were, with as much vengeance as it had, I don’t think they would have been able to do anything.”

One of the three who stayed behind has a tractor and was using it create fire lines. When he ran out of fuel for the tractor, she says, he managed to get a call through to a friend who brought him more gas by driving up Left Hand Canyon, past a “road closed” sign and up some back roads. The friend then returned safely after making his delivery, according to Bender.

But aside from her three rogue firefighting neighbors, she gives most of the credit for the saved homes to the professional and volunteer firefighters in the area.

“They burned the grasses right up to my house so that when the fire came, it stopped where they had already burned it,” she says.

In the end, Bender explains that the blaze was a unique conflagration in which factors like plenty of dead wood, high winds and topography combined to create the perfect firestorm.

“Flames were twice as high as the trees,” she says. “It was like a 100-year fire. There was so much fuel in the woods. … Everything conspired to make it pretty much impossible to fight that fire.”

Deputies arrested one man who Brough said made repeated attempts to cross checkpoints. But Brough said the fire brought out another side of people, too.

“We had three DUIs, which was surprising,” Brough said. “We had people showing up at the checkpoints while intoxicated.”

Koehn helped start 4milefirerelief.org, a website where people can donate to the relief fund for fire victims.