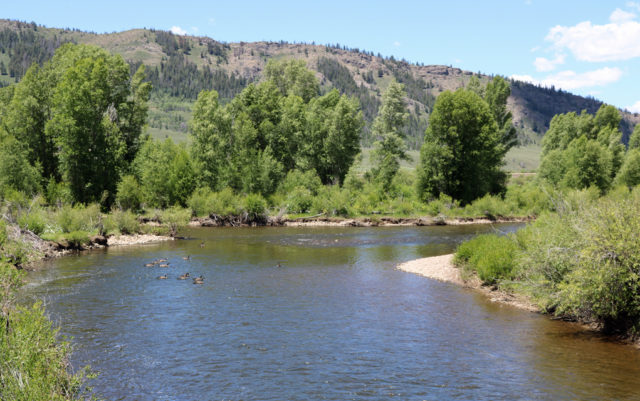 On Jan. 23, the Trump administration finalized a rule that would remove protections for waterways throughout the country, and as much as 70% of Colorado’s water, according to the Colorado Department of Public Health and the Environment.

Framed as Trump “fulfill[ing] yet another promise,” the Navigable Waters Protection Rule strips environmental safeguards previously covered by the Clean Water Act and the Waters of the United States rule.

“Basically it takes protection away from intermittent and perennial streams, anything that doesn’t flow year-round,” says Gary Wockner, director of Save the Colorado. “If this goes through, we will no longer be protecting a lot of streams in the mountains that don’t flow year-round.

“That’s extremely bad news, there’s no other way to look at it,” he says.

The new Navigable Waters rule specifies four protected types of waterways: territorial seas and large rivers and lakes; tributaries that flow year-round; lakes and ponds that are connected to larger bodies; and adjacent wetlands. In the West, where many tributaries don’t flow in warm months, and are being drained and diverted due to infrastructure projects, the amount of impacted waterways is likely to be large.

Wockner places blame on multi-national agriculture corporations, the national chamber of commerce and industries like oil and gas for supporting the move — or, at least, they’ll be the greatest beneficiaries.

“Depending on the possible impacts for the proposal of a housing development or ski area expansion or anything they’d propose to do where they’d formally need a Clean Water Act permit, it will completely negate protection,” Wockner says. “It will completely negate the entire public process required by the Clean Water Act, and it will negate any kind of watchdog effort. If you were a developer and applied for a permit in the past, the public could challenge that permit and appeal to court.”

It’s another blow to public input on projects that could harm the environment, as the bedrock environmental law, the National Environment Policy Act (NEPA) is also on the chopping block. On Feb. 11, the federal Council of Environmental Quality will hold one of three public hearings on rollbacks of NEPA, which will shorten periods for environmental review and lessen the standards that operators need to meet in order to build large projects.

Sam Gilchrist, Western campaigns director at the National Resources Defence Council, says the move to curb NEPA’s scope “seems political” and will severely restrict public input that, in the past, has largely made projects better, and not, as the Trump administration claims, hampered them. For instance, Gilchrist says, the NEPA process prevented extensive mountain blasting and rerouting of the Colorado River during I-70 work.

“Anytime you limit public input, then you have worse-off projects, and NEPA in Colorado has really shown good results on almost every project on which it’s been implemented,” Gilchrist says. “It’s funny because there really are not that many NEPA cases filed annually. To say this is going to help push through big projects is speculative on the administration’s part, or that it will help them happen faster, because they don’t take as long as the administration is claiming.”

In the face of the Navigable Waters rule and the NEPA rollbacks, it will be up to Western states to ensure appropriate environmental protections are enacted to mitigate the new rules’ impact.

“In the absence of federal leadership, we are going to do everything possible to protect streams and wetlands in Colorado,” said Patrick Pfaltzgraff, director of the state Water Quality Control Division, in a statement. “It’s sad that we have to step up in contrast with our federal government on something so basic as protecting our water, but we must.”

Wockner said the state legislature, as in California, can enact stringent water protection laws that restore the water regulations, and that Attorney General Phil Weiser can sue the federal government for the changes, independent of support from the governor or legislature.

But state action can only go so far, he adds.

“This is the kind of law you want at a federal level not a state level,” Wockner says. “Local control might make sense on certain things, but it does not make sense on water, because water doesn’t know a boundary. Colorado is a headwater state, so the state of Colorado can do a lot. Every other state downstream of our water is not protected. They’re going to get the pollution.”