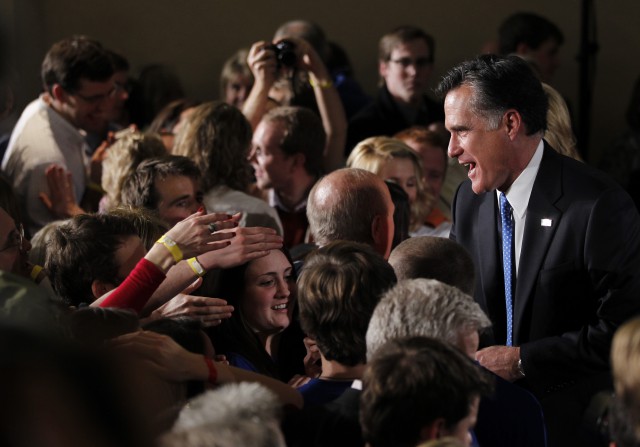 DES MOINES, Iowa — In the closest finish in the
history of the Iowa caucuses, Mitt Romney edged out Rick Santorum by
eight votes in the first battle for the Republican presidential
nomination.

A distant fifth-place finish apparently ended the
once-promising candidacy of Rick Perry. The Texas governor, who started
as a prime contender for the nomination last summer, broke off plans to
fly to South Carolina for more campaigning, and said he was returning
home instead to “determine whether this is a path forward.”

Santorum rode a late-breaking burst of support after
getting counted out by virtually everyone until the final days of a long
campaign. His Iowa comeback represented a drastic reversal from his
last election night, a 17-point re-election drubbing in 2006.

“Thank you so much, Iowa,” said the former
Pennsylvania senator, who swapped his trademark sweater vest for a coat
and tie to address jubilant supporters in a Des Moines suburb.

The victory strengthened Romney’s candidacy heading
into next Tuesday’s New Hampshire primary, where he enjoys a big lead in
the polls and a victory would provide momentum to make him the clear
favorite to become the GOP nominee.

Romney, addressing supporters at a downtown hotel
before the final results, congratulated Santorum and Ron Paul, who
finished third.

“We also feel it’s been a great victory for us, as well,” he said.

Paul, nearly doubling his Iowa vote from 2008, was a
close third. In an otherwise upbeat speech to supporters in the Des
Moines suburbs, the Texas congressman said that he and Romney were the
only top-tier vote-getters “who can actually run a national campaign and
raise the money” — a clear shot at Santorum.

“We have a tremendous opportunity to continue this
momentum,” Paul said. But his failure to finish higher disappointed many
of his supporters, the dejection evident on the face of his son and
political heir, Sen. Rand Paul, R-Ky., who stood behind him onstage.

Despite, or perhaps because of, the wild voter mood
swings that produced a revolving cast of front-runners, the caucuses
failed to generate the big increase in voter turnout that many
Republicans were expecting.

Only slightly more Republicans turned out as in 2008.
A clear, cold night was no barrier for Iowa residents. GOP leaders had
expected that enthusiasm among party activists would mean increased
turnout, like the huge vote that Democrats generated in 2008. But the
lack of a compelling social conservative to excite the Christian
conservatives who dominate the caucuses, and a late-starting push by
Romney, who played down his Iowa campaign until the last six weeks, may
have been contributing factors.

Despite the close result, there is no official
provision for a recount because no delegates are at stake. The
Republican vote was essentially a popularity contest among those who
attended, and at some caucus sites there are no paper records of the
vote.

The results were a clear setback for a pair of
candidates once expected to contend for the nomination — Perry and Newt
Gingrich. Michele Bachmann, who won a high-profile Iowa straw poll last
August, was a distant sixth and faces elimination from the race, though
she gave no indication in election night comments that she would drop
out.

With Romney hoping to put an effective lock on the
nomination as soon as the end of this month, the Republican race will
now enter a new, more contentious phase.

That seemed clear in Gingrich’s withering election
night remarks. The former House speaker — who has been subjected to a
fusillade of negative attack ads — lashed out at Romney, a man he had
labeled as a liar in a broadcast interview earlier in the day. Standing
before his supporters, his wife Callista at his side, Gingrich called
Romney “a Massachusetts moderate who in fact will be pretty good at
managing the decay” in America.

Gingrich said Romney had given “no evidence” of an ability to change the culture or politics of the country.

A caucus-night survey of hundreds of Iowans as they
entered voting sites across the state showed that Romney, the caucus
runner-up during his first presidential try four years ago, split with
Santorum the votes of those who identified themselves as Republicans.
Romney also was the first choice of those who said they prized business
experience over a career in government, a group that made up two-thirds
of caucusgoers.

Paul drew strong support from independents and those
under 30, many of them first-time caucusgoers. Santorum drew support
from social conservatives, who cast about 3 in 5 votes, virtually the
same share as in 2008, when Mike Huckabee, an evangelical Christian
favorite, was the Iowa winner.

This time, however, religious conservatives
splintered. Their inability to coalesce behind a single contender made
it possible for Romney to contend for a victory with roughly the same
share of the vote he got in 2008.

Paul, meantime, roughly doubled his share of the vote
from last time. The iconoclastic congressman from the Houston area, who
has been running off and on for president for a quarter-century, was
never far from the lead in Iowa.

Despite what could well be the best night of his
political career, the 76-year-old candidate remains a distinct long-shot
for the GOP nomination.

Paul’s isolationism and call for the return of U.S.
military forces from overseas deployments has clear appeal to moderates
and younger voters. But his dismissal of a threat from Iran’s nuclear
program poses a potentially insurmountable hurdle for many, if not most,
Republican primary voters, who favor a strong U.S. defense posture.

Self-described independents — deprived of a contest
on the Democratic side — turned out in significantly higher numbers than
in 2008. They made up about one-fourth of the vote, according to
network entrance polling, compared with 13 percent four years ago.

Nearly half of the independents supported Paul. The
popularity of his libertarian views among younger voters — he speaks
favorably of legalizing drugs — was reflected in the support of nearly
half of voters aged 17-29, who made up 15 percent of the caucus
electorate, up from 11 percent in 2008.

For Santorum, a long-shot who rode a late surge of
support after Perry and Gingrich fell from favor among conservatives,
the top-tier finish was a vindication of his old-school approach to the
first campaign of the Twitter age. Santorum’s financially pinched
candidacy followed the classic Iowa playbook — taking him to all 99
counties over several months.

The former Pennsylvania senator held more than 370
town-hall-style question-and-answer sessions with voters, from the one
that attracted a single voter to a number that drew hundreds of
supporters in the closing days of the campaign.

Helped by his anti-abortion views, Santorum gained
endorsements from several prominent social conservatives, including Bob
Vander Plaats, a former GOP gubernatorial candidate, as well as a
prominent pastor and a talk-show host in western Iowa, the most
conservative part of the state.

Romney had played a coy game with Iowa voters,
waiting until the last six weeks to begin an all-out push. He made fewer
trips to the state than his main rivals, counting on a stealth effort
by his campaign and heavy spending by political action committees that
support him.

If Romney were to score back-to-back wins in the
first two contests — something no non-incumbent Republican presidential
candidate has ever accomplished — he’d be positioned as a heavy favorite
to gain the nomination.