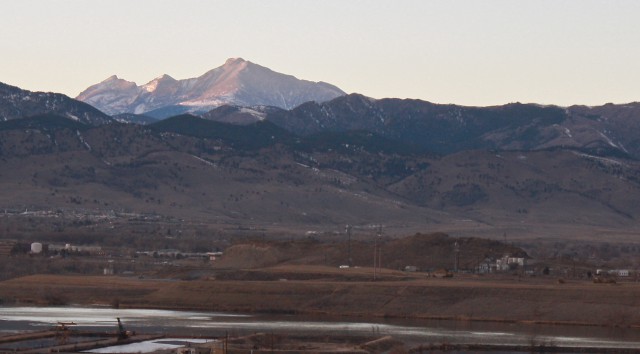 As we approach the conclusion of the Ghosts of Valmont Butte series, we’re going back to the beginning.

Back to the first people who used the butte — not as a dumping ground, but as a sacred place.

There is evidence that Native Americans began inhabiting Boulder Valley more than 10,000 years ago. And when pioneers arrived in Boulder Valley in 1858, Valmont Butte served as a winter camp for Arapaho Indians.

According to historical accounts, like an archeological history of the property written by Peter Gleichman in 2004, the land belonged to the Arapaho and Cheyenne by treaty, and had been used by the Utes. Native Americans found the buttes (there used to be several, before dams were built between them to hold in tailings) and the lakes south of them suitable for camping and hunting. Settlers reported that about 400 Arapaho participated in a communal antelope hunt there in 1860.

The Valmont Butte area also has a connection to the massacre of Cheyenne and Arapaho at Sand Creek in 1864 — it was at a sod fort just north of the butte where the Colorado volunteer militia mustered before the attack.

The last of the remaining tribes were removed from the area in 1881.

It’s been reported that the butte was used for ceremonies and Native American burials. Certain Lakota pipe carriers considered buttes sacred places and good locations to pray. Sweat lodges were held at the butte as recently as the mid-2000s, until the extent of the con tamination at the site became more widely known and native people elected to stay away from the site. The basalt rock of the dike has even been collected for use in sweat lodges elsewhere because of its ability to hold intense heat.

“I think the word is out now to stay away from those rocks,” says Lori Windle of the Valmont Butte Heritage Alliance.

Native Americans won’t say much about the possible burials and artifacts in the area, or where they’re believed to be located, for fear of encouraging looters. But over the years, some cultural resources have been documented at the butte. Several local families, especially those descended from the original Valmont settlers, say they have found or collected artifacts.

Nick Halsey, a Lakota who was the last caretaker at the Valmont mill site, explains that the site is sacred in part because the butte was formed by a volcanic eruption.

“Our people have a deep connection to Grandmother Earth,” he says, adding that the butte was a common ground shared by various tribes. “If someone was using it for prayer, another tribe would respect that and would wait until they left.”

It was also a crossroads, Halsey says, a neutral site where tribes would pass in peace.

He adds that the butte has special meaning because it runs east-west and is located at the confluence of Boulder Creek and South Boulder Creek. The place where the two drainages meet was believed to be sacred because it produced special plants that native people would use to make medicines.

It was due in part to opposition from American Indian tribes and local groups like the Native American Rights Fund that the city abandoned its plans for constructing a biosolids treatment facility (to convert human waste into fertilizer) and fire training center at Valmont Butte in 2005. (Organic farmers in the area also objected, citing fears that pipes carrying human waste might rupture and contaminate their fields.)

One of the heavyweights opposing development at the site was the Colorado Commission of Indian Affairs, which is chaired by the state’s lieutenant governor.

“It was a sacred location for many tribes,” CCIA Executive Secretary Ernest House says of the butte.

A few years after plans for biosolids processing and fire training were dropped, the city had a deal in the works to sell the property to the Trust for Public Land, which has bought and cleaned up properties to preserve them for native people. But the deal fell through, and some say it was because an appraisal came in too low. When the option to buy the site expired, Windle says, “it was a blessing in disguise.”

The areas deemed sensitive due to possible burials or other cultural resources have been identified by the city, its tribal monitor and various archeologists over the years, and city officials have repeatedly made assurances that none of the areas where they are digging up contaminated dirt or stockpiling clean fill dirt contain those sensitive materials.

But one never knows what’s just under the surface, so the city hired a tribal monitor and an archeologist to keep tabs on the cleanup. Still, members of the tribes and the Valmont Butte Heritage Alliance have concerns about the impacts of the earth-moving.

“It’s really easy for a bulldozer operator to blow something out,” says archeologist Gleichman.

And city officials appear to have only exacerbated those concerns by refusing to let VBHA members meet with the monitors or visit the site. The tribal monitor has now been sent home to Wyoming.

The city’s current approach to Valmont doesn’t seem like much of a departure from its actions eight years ago. Gleichman says a city attorney tried to censor information about possible Native American burial sites on the property when Gleichman submitted his archeological history to the city in 2004. Gleichman says he went public with the attempted cover-up, and the attorney “tried to blackball me from doing any more work for the city.”

If city workers do uncover any Native American remains or “funerary objects,” there is a set protocol for stopping work in the area and notifying authorities like the state archeologist. It is a protocol set by both the state’s burial law and the Native American Graves Protection and Repatriation Act.

House, the CCIA executive secretary, says he has kept tabs on the happenings at Valmont, and he wonders if city officials intend to brief Native American leaders at the end of the project about what they encountered during the cleanup. When asked whether he’s satisfied with the city’s handling of the remediation, he says, “I think that still remains to be seen. … We’re going to be watching it closely.”

Windle and another member of the Valmont Butte Heritage Alliance, Steve Moore, senior staff attorney for the Native American Rights Fund, say that even though the Valmont property was a dumping ground for decades, the importance of the butte lives on.

“Despite the desecration,” Windle says, “the site was sacred before people came, and will be sacred long after they’re gone. … It has its own sense of spirituality as a living thing.”

“For me, the lesson of Valmont Butte is it’s a place of inherent power,” Moore says. “Man has leveled many insults at the butte over the last 100 years, but it still speaks to native people.”

The butte may not be a pristine, high mountain peak straight out of a Kevin Costner movie, he says, “but native people still feel the power of that place,” in spite of the abuse it’s taken.