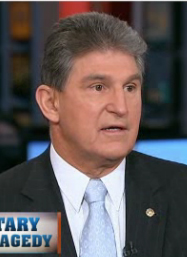 Sen. Joe Manchin, D-W. Va., is a member of the National Rifle Association and is one of the most conservative Democrats in the Senate.

But even Manchin is ready and willing to have a discussion about new gun control legislation in the wake of the shooting in Newtown, Conn., that left over 20 people dead. He says there’s no place for assault weapons in any hunting activity.

“I don’t know anyone in the sporting or hunting arena that goes out with an assault rifle,” Manchin said on MSNBC’s Morning Joe.