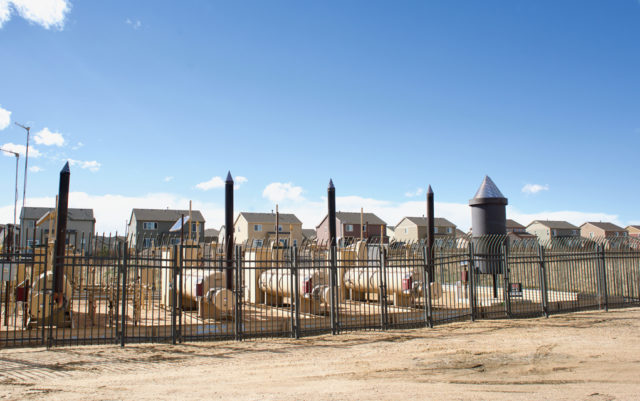 On April 14, the Colorado chapter of Sierra Club officially endorsed Ballot Initiative 97, which, if passed, would require all new oil and gas operations to be sited at least 2,500 feet away from schools, homes, hospitals and other structures where sensitive populations may be, as well as water sources.

In its endorsement, the Colorado Sierra Club cited several critiques often used by those opposed to fracking: existing setbacks of 500 and 1,000 feet were set arbitrarily and are ineffective; recent explosions and incidents at oil and gas sites mandate tougher restrictions; oil and gas operations increase pollution; and renewable energy is expanding.

The endorsement included a bit about how the chapter “appreciates” that those with rights associated with mineral interests should be allowed to profit from those interests, but that it shouldn’t be at the expense of surface-owners’ rights.

Will Walters, chair of the chapter’s executive committee, said in the endorsement that oil and gas operations emit millions of tons of poisonous material, which can result in “deadly explosions, asthma attacks, increased cancer risk and water pollution.”

“Initiative 97 would move [oil and gas operations] a safer distance from playgrounds and rivers, while still allowing modern horizontal drills to extract shale oil and methane,” Walters said. “The Sierra Club supports this win-win science-based solution to protect health, safety and the environment without harming the economy.”

The endorsement might surprise people who remember what happened in the 2014 push for two ballot initiatives designed to protect citizens from the hazards of oil and gas extraction. At that time, it was Sierra Club that was said to have played a part in killing those initiatives.

Petitions for the two 2014 ballot measures, one that would’ve increased setbacks to 2,000 feet, garnered more than enough signatures to put the issues before voters. But due to a last-minute compromise between Gov. John Hickenlooper and Rep. Jared Polis, who had bankrolled the signature-gathering effort, the measures were scrapped at the final hour, literally.

Soon after the failure to turn in the more than a quarter-million signatures, Boulder Weekly received an email sent to supporters of the measures from Nick Passanante, the campaign director for Safe. Clean. Colorado., the group funded by Polis that controlled the measures. In the email, Passanante wrote, “We simply did not have the financial backing to make that happen. In fact, we were being actively blocked by three of the largest national enviro groups in the nation — Sierra Club, Environment America, and to a lesser extent LCV [League of Conservation Voters].”

So what’s going to happen this time around as we approach Election Day? Based on history, it only makes sense to question if Sierra Club national will again use its influence to try and defeat 2018’s 2,500-foot setback initiative. While it’s too early to say, there is reason for concern.

The effort galvanized environmentalists, and resulted in support for switching coal-fired plants to natural gas, which emits about half the carbon dioxide when burned. This approach seemed a good common sense compromise until research beginning in 2010 found that methane leaking from natural gas activity may well speed global warming even beyond the impacts of burning coal. In addition, the Beyond Coal push for more natural gas extraction via fracking also had the side effect of helping to double U.S. oil production because, for the past decade, natural gas is largely being produced from wells that are primarily associated with oil extraction. Dry gas is not economic to produce at current prices.

But the embrace of natural gas seems to have been about more than just a shift away from coal. There were financial implications for Sierra Club national.

The national organization has received donations from several entities that have positions explicitly stating their opposition to coal and embrace of a shift to natural gas. Since 2009, Sierra club has accepted over $10 million from Sea Change Foundation, a major funder of environmental nonprofits started by two energy investors, and over $6 million from The Energy Foundation, a group that funnels money between donors and organizations and which also supports the extraction and use of natural gas. Between 2007 and 2010, Sierra Club accepted $26 million from persons or groups associated with Chesapeake Energy, one of the largest frackers of natural gas in the world. When it was reported Sierra Club was set to receive $30 million more from Chesapeake, there was such strong public outcry that the group declined the additional money.

Sierra Club expressed regret for accepting the donation from Chesapeake, but then turned around and accepted a $50 million pledge from Michael Bloomberg, the billionaire former mayor of New York City and outspoken advocate of natural gas and fracking. In 2012, Bloomberg wrote in an op-ed, “The production of shale gas through fracking is the most significant development in the U.S. energy sector in generations.”

So if Sierra Club has such strong financial ties to natural gas extraction and fracking, how did one of its state chapters end up supporting an initiative that some of its donors and the oil and gas industry will likely spend millions of dollars trying to defeat this fall? Did it go rogue, or has Sierra Club national shifted its official policy on natural gas?

When asked to clarify Sierra Club’s stance, Sarah Burton, Sierra Club’s PAC director, issued BW a statement, reading, “The Sierra Club supports Colorado Sierra Club’s endorsement of Ballot Initiative 97. As Coloradans know firsthand, there is no manner to make oil and gas operations safe, so at absolute minimum, we must prevent them from threatening our schools, our homes, and our families.”

Hillary Larson, communications director for Colorado Sierra Club, says, “More often than not, local ballot measures and initiatives are endorsed or opposed by the state chapter rather than national.” She adds that “local chapters can take a stance on issues that national does not currently have a policy on, but, if there’s a potential conflict, we would contact the folks working on the national campaign to make sure there were no concerns.”

When asked if this was one of those issues where the local chapter may disagree with the national organization, and thus require approval, Larson said, “No, Colorado Sierra Club did not seek approval to endorse this ballot initiative, nor did we need to.”