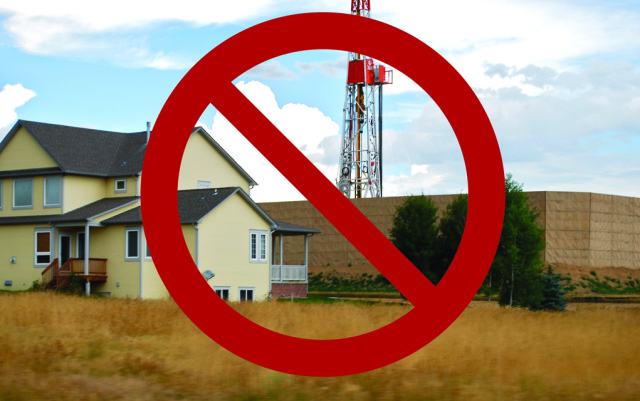 Colorado voters could see two constitutional amendment initiatives on the November ballot that, if passed, would limit oil and gas development near populated areas and would give local governments more authority over such developments. The initiatives are sponsored by Coloradans Resisting Extreme Energy Development (CREED), a Boulder-based grass-roots organization with board members from Boulder, Denver and Durango.

The first initiative, “Mandatory Setbacks from Oil and Gas Development,” would require a 2,500-foot setback “from the nearest occupied structure or other specified or locally designated area” for any new oil and gas development, which includes wells and industrial infrastructure such as compressor stations and production platforms.

Although CREED considered an initiative with a 4,000-foot setback, the 2,500 feet, according to Tricia Olson, executive director of CREED, is based on health studies done within the state of Colorado, which found that there were enough toxins at that distance to potentially have health impacts. And although other studies show impacts can be felt at much greater distances, “We selected 2,500 feet because we thought that would protect most Coloradans,” Olson says.

“Local governments are unique,” Olson says. “They know their locale better than anyone else does and will know what will work there.”

CREED whittled the list of potential anti-fracking initiatives from 11 ideas discussed earlier this year to the two for which they are now seeking signatures. With the two initiatives, CREED hopes to protect Coloradans from encroaching oil and gas development. Olson is very insistent, however, that neither one of the initiatives means a ban on fracking in Colorado.

In order to get the constitutional amendment initiatives on the ballot come November, CREED needs to gather 98,492 signatures, or 5 percent of the population who voted in the last Secretary of State election, in less than four months. The network of supporters for these initiatives stretches throughout Colorado, including organizations and citizens in Weld, Larimer, Denver, Jefferson, Arapahoe and Adams counties as well as “some pockets of support” on the Western Slope and in southwest and southern Colorado, Olson says.

The group hopes to gather 160,000 signatures per ballot measure before the deadline on August 8, but will turn in the petitions even if they are short of that goal. Volunteers are expected to start circulating the petition for signatures on Earth Day, Friday, April 22.

CREED hopes to recruit 1,000 volunteers to gather signatures. Olson says several environmental organizations are donating volunteers to the cause, and CREED will pay people to circulate the petition if needed. So far, financial backing has come primarily from a single source but they are looking for additional funding moving forward. Perhaps the establishment-shaking firepower of small, personal donations will show itself once more, just as Colorado citizens demonstrated through their support of Bernie Sanders and Donald Trump that they have grown weary of establishment politics. And as Olson points out, the issues addressed by these initiatives are bipartisan.

Several activist groups have endorsed the initiatives including Frack Free Colorado, 350 Colorado and Coloradans Against Fracking. Numerous other groups are expected to officially endorse the initiatives in the coming weeks.

“This is one of the two avenues left to us. We either change the state law or we lay down in front of bulldozers,” says Razz Gormley with Frack Free Colorado. “Our governments are so entrenched in oil and gas that we’re never going to get any help otherwise.”

CREED, Frack Free Colorado and 350 Colorado have presentations about the initiatives scheduled in communities throughout the state in the coming weeks. The presentations will include an overview of the impacts of fracking, the constitutional amendment initiative process and the two initiatives specifically.

“These [initiatives] make a lot of sense and they support one another. Some communities have already stated that they don’t want to rely on oil and gas and have been unconstitutionally sued for their decision,” Gormley says, referencing Longmont’s fracking ban and Fort Collins’ moratorium. “The communities that are most impacted by this really don’t have any other options. The grass-roots [movements] have gotten behind these initiatives, the front-line communities are really excited about them and this is where all the energy is going.”

“The movement in Colorado to address fracking has basically done everything we can within the normal advocacy channels,” says Micah Parkin, executive director of 350 Colorado. “We’ve all worked at the local level, with our local elected officials who have done, in many cases, all they can and yet our democracy is really being usurped by this industry and [the initiatives are] really a last line of defense so that our communities can keep fracking at bay. … We have a desperate need right now for these two ballot initiatives to pass so that we have that constitutional authority to protect ourselves.”

And this could be the last chance for such grass-roots constitutional amendment initiatives to make it onto a Colorado ballot. Over the last two years, state legislators — prodded and funded by many of the state’s wealthiest individuals and corporations who comprise the “invitation only” organization, Colorado Concern — have made clear their intent to make direct citizen democracy as difficult and expensive as possible. As previously reported by Boulder Weekly [“Behind the Curtain,” Sept. 12, 2015] the Colorado establishment, which is represented by the leaders and many rank and file members of both political parties, is out to stop these citizen initiatives and is willing to spend $100 million to make that happen.

But Olson is confident that if the CREED initiatives make it on the November ballot, they will pass. Regardless of the outcome, Olson says the massive undertaking and effort is worth it.