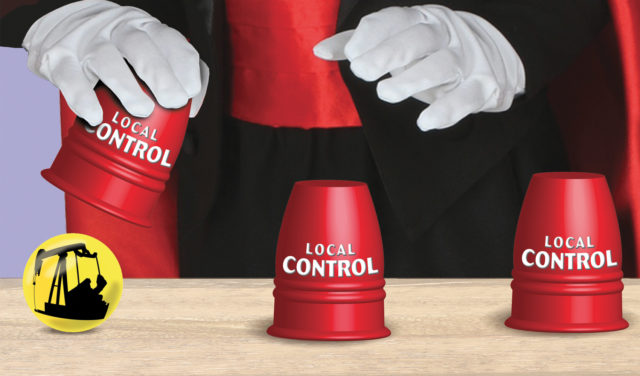 When it comes to the ballot initiatives being put forward this election cycle — at least the ones pertaining to oil and gas extraction — you often hear them referred to with terms like “community rights” or “local government authority.”

But unlike in the past, those terms are being applied to a variety of initiatives, including one that would actually prevent communities from creating local ordinances to protect themselves from oil and gas extraction in close proximity to their homes, schools and hospitals.

As a result, signing a petition in 2016 has become a rather confusing exercise wherein “signer beware” seems an appropriate warning. Not surprisingly to many observers of the ongoing and heated battle over fracking in Colorado, this confusion due to the blurring of such terms doesn’t appear to be an accident.

Over the past five years, the terms “community rights” and “local authority ” have become closely tied to the various citizen-driven initiatives written to allow local communities or even counties the right to ban or delay fracking or otherwise regulate oil and gas extraction within their jurisdictions. This explains why these terms so often find their way into the official or popular titles of such citizen efforts. This year’s initiatives with that same intent are no exception.

Initiative #40 is most often referred to as “The Colorado Community Rights Amendment” or the “Local Governance Amendment.” It has been put forward as a project of Coloradans for Community Rights.

Proponents of Initiative #40 claim the amendment addresses the conflicts that exist between the fundamental rights of communities, people and the environment, and the excessive legal authority that politicians have wrongly granted to corporations.

They further claim #40 would not only allow local communities to ban or otherwise regulate oil and gas extraction, but also allow local governments to control all industrial activity as well as other things, such as allowing communities to set their own minimum wage limits.

Proponents of #75 say it would give local governments the ability to protect citizens from the harmful industrial processes of oil and gas extraction by allowing a community to ban them within city limits or otherwise apply local regulations stricter than current state regulations.

CREED is also gathering signatures for Initiative #78 titled “Mandatory Setbacks From Oil and Gas Development,” which, if it makes the ballot and then passes, would force the oil and gas industry to leave a 2,500-foot buffer or “setback” between oil and gas drilling/production operations and homes, schools and hospitals. CREED says the size of the buffer zone was determined based on health studies.

In the past, anyone supporting the effort to put an initiative on the ballot giving citizens and local governments more control over the oil and gas industry simply had to listen for the code words “community rights” or “local control” coming out of the signature gatherer’s mouth and then sign the petition. But times have changed and so have the oil and gas industry’s strategies.

There is another ballot measure making the rounds this year, Initiative #138.

The popular title for #138 is “Local Regulation of Oil and Gas Development.” I know, sounds familiar right?

As you can see, #138’s informal title is shockingly similar to Initiative #75’s title of “Local Government Authority to Regulate Oil and Gas Development.”

It certainly seems bizarre and more than a little inappropriate for the Secretary of State’s office, which oversees such matters, to have allowed two initiatives collecting signatures at the exact same time to be operating under virtually identical names.

This name debacle is a recipe for a range of signature-gathering disasters from mere confusion to outright deception.

So just how similar are the two initiatives in what they are seeking to accomplish? While the names may be virtually identical, they are, in fact, opposites.

“Shall there be an amendment to the Colorado constitution stating that local governments may enact and enforce local laws and regulations concerning oil and gas development or operations so long as the laws and regulations are no more restrictive than, and do not conflict with, state laws or regulations?”

At first blush, it’s hard to understand the point of passing this initiative. The Colorado Supreme Court pretty much just made this the law of the land when it struck down both the fracking ban in Longmont and Fort Collins’ moratorium. It is simply redundant to that ruling.

And obviously, despite its deceptive title, for all practical purposes, the goal of #138 is to eliminate all rights of all local governments to regulate oil and gas extraction in any way that is contrary to the state’s oversight, which the industry largely controls due to its outsized influence over our governor and state house. In short, pass #138 and nothing changes.

So what’s the point?

Prestidge is the energy industry director of the Denver Area Chamber of Commerce where he works for political operative Kelly Brough. You may remember Brough from Boulder Weekly’s “Behind the curtain” investigation. She is the former Gov. Hickenlooper staffer who is a member of Colorado Concern, the state’s most influential organization when it comes to pushing for unfettered oil and gas extraction.

She is, or was last year, also on the Advisory Committee for CRED, the pro-oil-and-gas group funded by Anadarko Petroleum and Noble Energy.

CRED pays for many of the pro-fracking commercials that inundate the airwaves these days. CRED also paid for the pro-fracking “energy and environment” section that previously ran in the Denver Post leading up to the 2012 elections in an effort to turn back the anti-fracking citizens initiatives that year.

Brough also sat on the board of Vital for Colorado, a pro-oil-and-gas front group working to defeat citizen opposition to unfettered oil and gas extraction in their communities, including previous and current citizen initiatives such as #75, #78 and #40.

As you may recall from previous Boulder Weekly investigations, Vital for Colorado has strong ties to Josh Penry and his EIS Solutions consulting firm as well as to Penry’s wife Kristin Strohm who runs the controversial Common Sense Policy Roundtable (CSPR), which works with both Vital and the Koch Brothers. Strohm runs CSPR through her position at Starboard Group, one of the nation’s leading fundraising organizations for conservative causes and Republican political campaigns. DeSmogBlog and Greenpeace have referred to Penry and Strohm as the nation’s “power couple of fracking.”

For a more complete explanation of how the oil and gas industry runs the state of Colorado and why establishment Democrats and Republicans alike are working behind the scenes to defeat citizen initiatives like #78, #75 and #40, please read Boulder Weekly’s two previous investigations, “Who killed the vote on fracking?” from Sept. 17, 2015 and “Behind the curtain” from Oct. 2, 2014.

This is the circle in which Prestidge operates.

He currently sits on the board of Vital for Colorado along with several members of Colorado Concern, including its Executive Director Mike Kopp.

Chad Vorthman, executive vice president of the Colorado Farm Bureau, is also on the board of Vital for Colorado and the advisory Committee for CRED, which brings us to Shawn Martini.

A few years back, Martini was director of communications at the Colorado Farm Bureau. But he took a four-year hiatus to be the senior communications director for an outfit called HBW Resources, LLC out of Houston. At HBW, one of Martini’s tasks was to pen a fracking blog that kept track of anti-fracking activism around the country for the benefit of HBW’s oil industry clients. The blog rated states red, yellow or green based on how much anti-fracking activity was occurring and how much opposition there was to drilling tight shale formations via fracking. Colorado was rated “red.”

Martini recently returned to Colorado and his old friend Chad Vorthman at the Farm Bureau. Martini’s new title is vice president of advocacy and, of course, designated representative of Initiative #138.

The pedigree of Initiative #138 raises the question of whether or not it’s just a coincidence that this oil-and-gas–industry friendly initiative sells itself with a nearly identical name to the one already being used by Initiative #75, a citizen effort that is attempting to accomplish the exact opposite outcome as #138.

And does it seem a well thought out strategy for petition gatherers for #138 to be, according to numerous citizen accounts, concentrating their efforts in places like Boulder County and Denver? Places where support for the oil and gas industry’s desire to restrict community rights so fracking can be done in neighborhoods is at its absolute lowest?

Wouldn’t it make more sense to gather signatures in places like Weld and Garfield counties or Pueblo and Colorado Springs where some people might be more receptive to signing away their communities’ rights for the benefit of oil and gas industry profits in exchange for the industry’s promise of permanent jobs, a promise we now know was only temporary?

These oil industry operatives’ choice of where to solicit signatures really did seem odd until we started hearing from people who claim that after signing a petition they thought would amend the constitution to allow local fracking bans, they now fear they may have mistakenly signed Initiative #138.

It’s the kind of mistake that should rarely if ever happen with proper oversight from the Secretary of State’s office.

At the end of the day, it’s the responsibility of each of us to read and make sure we know what we are signing. If you believe you signed the wrong petition, then by all means take the time to sign the right one.

The stories floating around about $1,000 fines for signing more than one “local regulation of oil and gas” petition are just more deception aimed at Colorado citizens. If you feel like a petitioner has intentionally deceived you, take their name and report them to the Secretary of State’s office. There is always a very slim chance that someone in that office might even write it down.

But for now, I’m afraid signer beware is your best strategy.