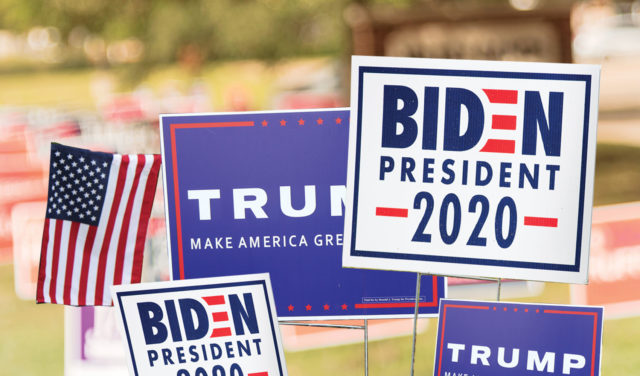 If you drove down 28th Street in Boulder any Saturday in the last two months, you saw the Trump party. An unmarked, black tour bus at the northwest edge of the Target parking lot, big banners on all the intersections of 28th and Pearl calling out pedophiles and begging for freedom to reign. And a growing number of folks in MAGA hats and Trump shirts, flags waving as they ran through crosswalks when the lights turned red.

They looked like they were having fun. And plenty of people driving by honked in support. Plenty flipped ’em off, too, and plenty more ignored the whole spectacle.

Good for Boulder. There hasn’t been sustained political expression like this for at least a decade. But was it something unique to this crazy year, and this crazy election, that brought out such expression?

“What we’ve seen in the past are the kinds of visible manifestations of politics — wearing a button or putting a bumper sticker on your car. We’ve seen that trend increasing over time, ” says Dr. Anand Sokhey, CU-Boulder professor, director of the American Politics Research Lab and author of a book, Politics on Display, that looks into the science of political yard signs and other displays.

What’s different, maybe, is the degree to which people identify with political causes. That’s largely the result of a concerted effort on behalf of politicians for years to create an us-versus-them dichotomy. Certainly, Trump has mastered the tactic and has benefited from its compounding effect — the more politicians have hammered division, the more people have taken on one side or the other as part of their identity. We were primed for Trump.

“One of the reasons I think you see and hear so much about yard signs and people engaging in theft and vandalism and these marches with flags and so forth is because in this time when we have these polarized kind of responses that are being triggered constantly, a lot of those markers [yard signs, etc.], those are about identity to people,” Sokhey says. “Identity is being primed by politics all the time. … And there’s a nontrivial contingent of people who want to show the people where they stand and who they are.”

So, the message becomes: You’re with us, or you’re against us. You’re good or you’re bad. And politicians capitalize on this binary. It’s so effective, Sokhey says, that the tactic is showing up in social movements more often, as in, “‘Back the Blue’ versus Black Lives Matter. These are kind of broad, sweeping statements from which a lot of people can make reasonable inferences about your politics,” Sokhey says. “You see people with these signs, ‘We believe in science, Water is life…,’ those are like people putting statements about their ideology on their front door.”

Even though yard signs, bumper stickers, etc., have never quite gone away, much of the expression has shifted online. Everything from Instagram filters that indicate one’s support for a cause to the stories one posts on their Facebook feed. And because of the algorithms social media companies employ to keep us engaged, we’re seeing things we tend to agree with, Sokhey says, while the in-person displays of political expression do the good work of getting us out of our political bubbles.

“People are kind of assuming their [social media] channels are what they want them to be. You’ll encounter some disagreement, but a lot of it is congruent information,” Sokhey says. “Putting up a yard sign or bumper sticker and doing it in public… it can’t be turned off. It’s out there in the world, tying to a physical thing, which is a little different dynamic than social media stuff.”

That doesn’t mean you’ll interpret the political expression correctly, or take people at their word for who they’re supporting and why. You may think a bunch of Trumpees in Boulder are just trolling and not actively trying to engage in political discourse. That may very well be true, but regardless of how the presidential election turns out (it’s still up in the air at press time), it’s clear way more people still believe in Trump than the experts had us believing.

Though Sokhey doesn’t think anyone can replicate Trump’s unique appeal in the future, the tactic of running as the outsider — which Trump did in both elections — is a proven method that’s likely to resonate with future voters.

“It’s that pent-up anger and frustration that people have about feeling like they’re not represented, they’re excluded and they’re not getting what they want,” he says. “Every politician, across the aisle, they all want to run on going to Washington and changing it. … I think that is absolutely going to continue, that narrative of the political outsider — exactly what that’s going to look like, we’ll see.”

Trump has shifted the Republican voter base — and the politicians within it — drastically in just four years. His support in the 2020 election, and the election of candidates that are friendly to the QAnon conspiracy theory, might have some of us feeling a little on edge about the direction of half the country. Sokhey says just like people moved from Romney (and in some cases, Obama) to Trump in 2016, they’ll move from Trump to someone else in the future.

“Parties change and people tend to change with them. Their identification is a bit flexible in that respect,” Sokhey says. “Candidates can move around a bit and a lot of people will follow. A good example of that is what Trump has done with trade. If you had told me you’d have a tariff-wielding Republican president eight years ago, I would’ve been like, what? … A good example on the left, you didn’t see in the mid-2000s many saying that gay marriage should be legal and recognized coast to coast. Fast-forward, politicians are shifting and then of course Democrats saw a sea change.”

So, change is the only thing that’s constant. That and people will express their political beliefs — online, with a yard sign, on a bumper sticker, on a street corner with a cowboy hat. Any guesses beyond that are speculation.