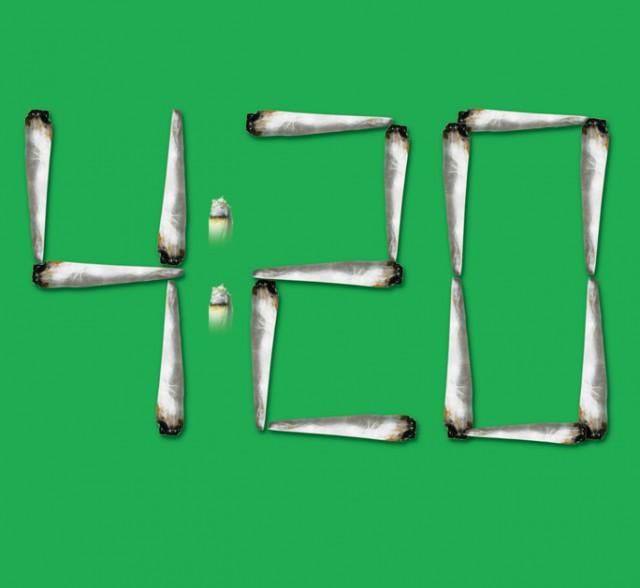 There are lots of theories about the origins of the April 20 marijuana smoke-out that enjoys such a strong turnout at 4:20 p.m. on the University of Colorado’s Boulder campus every year.

Some have claimed that 420 was police or penal code for marijuana possession in California, while others maintain it refers to the number of chemical compounds in cannabis. It’s been rumored that 420 was the number of a bill to legalize pot, or that 4:20 p.m. was the time to get high if you wanted to peak when the Grateful Dead came on stage. Some assert that it dates back to tea time in Europe, others point to 420 references in popular song and verse. April 20 was Hitler’s birthday.

But perhaps the most plausible tale of how it got started is a story that has been given credence by High Times magazine and the likes of ABC News and cable television channel G4. It is repeated across the Internet, even on mainstream sites like wikipedia.com and about.com.

It is the story of the Waldos, a group of students in San Rafael, Calif., who reportedly used the term “420” in the early 1970s as a reference to the time they would meet at a statue of Louis Pasteur on the campus of San Rafael High School to smoke pot. The Waldos, who got their name because they used to hang out at a particular wall on campus, claim that the 420 term was used as a secret code in the presence of parents and teachers.

Alan Kaplan of Boulder, who just launched GrowYour420.org, referred Boulder Weekly to a man who purports to be a Waldo, and seems to have the goods to prove it.

The man prefers to go by Waldo Steve, to protect his identity. He says most of the Waldos have wives and children now and are hesitant to publicize their connection to the prominent marijuana event. “People have mortgages and jobs,” Steve says.

While there were as many as a dozen people in the extended family of Waldos, the core members (in addition to Steve) were Waldo Dave, Waldo Jeff, Waldo Larry and Waldo Mark. They even have their own website, waldo420.com.

Steve told Boulder Weekly that when he was a senior in high school, a friend’s brother who was serving at the Coast Guard station at Point Reyes was worried his commanding officer was going to find out about the patch of marijuana he was growing on the peninsula, and he offered to turn its care over to the Waldos. He gave them a “treasure map” depicting the location of the pot field, Steve says, and the Waldos began meeting at 4:20 p.m. every day at the Louis Pasteur statue, where they’d pile into Steve’s ’66 Impala, spark up some weed and drive out to the peninsula to look for the cannabis cache.

He says they picked 4:20 p.m. simply because some of the Waldos played football and other sports. School got out at 3:10 p.m., Steve says, athletic practices lasted an hour, and “we needed 10 minutes to get from the gym to the statue.”

They never found the marijuana patch, but the group continued using the term as secret code. Their siblings and friends picked up on it and started using it, Steve says, and as they all went off to college around California, it spread to various campuses.

In addition, according to Steve, Waldo Mark’s father handled real estate matters for the Grateful Dead, and Mark did some housesitting for members of the band. Waldo Dave’s brother managed Dead guitarist Phil Lesh’s side band, Too Loose to Truck. So Steve says the Waldos regularly interacted with the members of the band, their staff and their fans, many of whom began using the term “420” as code for marijuana.

In fact, in one of the 1975 postmarked letters that Steve provided Boulder Weekly as proof that the Waldos were using the term “420” at that time, Waldo Dave writes about getting high with Lesh and David Crosby while working as a backstage doorman at a concert. The letter ends, “P.S., a little 420 enclosed for your weekend.” Another letter sent to Steve by a friend visiting Israel in 1975 concludes, “P.S., no 420 here.”

Steve says those who are still skeptical of the claim that the Waldos started the “420” reference could perform an analysis of the dyes and fabric of a flag that was made by a friend in the mid- 1970s, a flag that bears the term “420.”

“Nobody is going to have any documentation of the use of 420 before that,” he says.

High Times Creative Director Steve Hager, the magazine’s former editor-in-chief, is credited with being the first to attribute the 420 term to the Waldos, only after flying out to California to visit them and see the proof firsthand.

“The Waldos are real, there’s no doubt about it,” Hager tells Boulder Weekly. “They’ve got letters from 1972. No one can come close to that. … There’s no question in my mind that they started it.”

Hager calls the 4:20 on 4/20 smokefest “the counter-cultural equivalent to Easter or Passover.” The term took off when it got to the Dead, he says, because the band was “the chorus of the counter-culture movement.”

Hager says the Waldos contacted him about a decade ago to claim credit for starting the term. But he first heard the phrase in the early 1990s, when the magazine received a flier for a 4:20 on 4/20 event at the summit of Mt. Tamalpais in California, which he says was the first — and is the biggest — of the annual gatherings.

But he says the one at CU is not far behind in terms of attendance.

He believes the CU event got so big because of efforts by the campus police to quash it. Over the years, those efforts have ranged from turning sprinklers on the crowd to publicizing photos of the pot smokers.

“That’s how Boulder’s got so big.

They tried to repress it,” Hager says. “When you mess around with spiritual matters like this, it’s going to raise a hornet’s nest.”

(CU police spokesperson Molly Bosley declined to disclose to Boulder Weekly what specific tactics will be used this year, but she says the priority will not be on making arrests but simply monitoring and providing enough security to ensure a safe event.)

As for the Waldos, Hager says they unwittingly sparked a tradition.

“They never tried to make it happen or capitalize on it,” he says.

“We were never Dead Heads, none of us,” Waldo Steve adds. “It was never anything but a private joke, and none of us ever made a penny off it. You can’t trademark a number.”

He says that in the 1980s, the Waldos began to realize the scope of what they had started when they started noticing “420” scrawled as graffiti on park benches and tables.

The Waldos still live in California, and they get together at least a couple of times a year. The obvious question is whether they still smoke marijuana.

“Some of the guys still do, occasionally,” Waldo Steve says.

Boulder Weekly recently reached two of the Waldos, Steve and Dave, by cell phone as they were headed up to the mountains for a ski weekend.

Dave jokes that he just lit up. They share stories from the good old days, like narrowly avoiding arrest after smoking pot and getting pulled over by the cops because a girlfriend looked like the kidnapped Patty Hearst, or sneaking into the “painted desert” at a Disneyland ride to get high behind some big rocks, only to have a geyser go off next to them.

Steve suggests that the five friends have a reunion at CU-Boulder’s 4/20 event next year, the 40th anniversary of the term’s birth.

“They’d probably like to see the original Waldos,” he says with a laugh.

Dave concludes, “We never thought it would get so huge.”