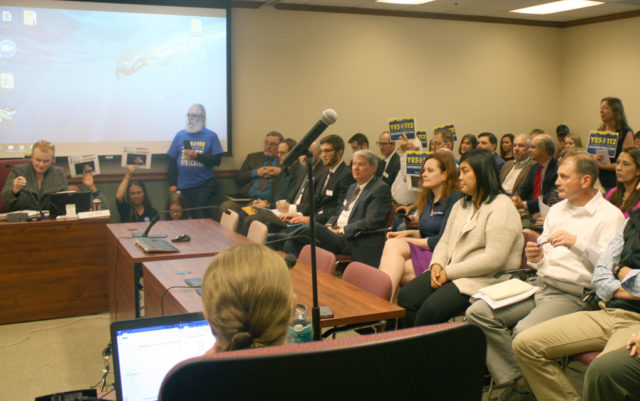 A regularly scheduled hearing of the Colorado Oil and Gas Conservation Commission (COGCC) on Oct. 29, quickly turned into a public debate over Proposition 112, the 2,500-foot setback measure on the Colorado ballot this year. If passed, Prop 112 would increase the current setback distance for oil and gas development from 500 feet from homes and 1,000 feet from schools and hospitals to 2,500 feet for all. Of concern to the supporters of Prop 112 is a major surge in drilling permit applications submitted in recent months as oil and gas companies try to get their permits approved before voters have their say over setbacks.

“We find it appalling that you’re looking to approve a flurry of permits just days before we have a chance to vote,” Deborah McNamara of 350 Colorado told the commission.

According to COGCC reports, the agency has 5,551 backlogged drilling permits as of Oct. 1, up from 1,992 at this time last year. The backlog is the largest since the COGCC started tracking this data point in July 1994, Department of Natural Resources (DNR) spokesperson Travis Duncan said in an email. “This is not the first time COGCC has had a backlog of permits. We continue to work through it as staffing allows,” he said, promising that there would be no change to the current permitting process. Yet it appears that something has occurred to significantly speed up the permitting process. In 2017, it took the COGCC an average of 111.25 days to process an application. So far this year, that time frame has decreased by approximately 30 percent to just 78.5 days.

The Colorado Oil and Gas Association (COGA) said both economics and politics have driven companies to submit the rush of applications.

“With prices having rebounded from two years ago, the economics are good for oil and natural gas development in Colorado. That, plus the fact that Proposition 112 is an attempt to ban our businesses, is pushing permitting application levels,” Dan Haley, CEO of COGA, said in an email statement. The organization urged its members to attend the COGCC hearing this week and speak out against Prop 112.

The hearing itself did not address the backlog, as COGCC staff, and not the commissioners, approve well and location permits, Duncan said. The majority of issues on the docket for the two-day hearing were spacing and pooling issues, and yet only a handful of speakers addressed specific items on the agenda.

Rather, speakers from both sides of the debate took their opportunity in front of the commissioners to address their concerns with the backlog, Prop 112 and the future of the industry.

Pro-Prop 112 speakers frequently mentioned the preponderance of oil and gas explosions over the last several years, emphasizing both the Firestone explosion in 2017 that resulted in the death of two men and the most recent blast that occurred over the weekend. On Oct. 27, three contractors working for Mallard Exploration were injured in a tank explosion just east of Briggsdale in Weld County. Two were treated for minor injuries nearby, while the third remains in critical condition. According to a GoFundMe page set up by his family, Dillon Dreher sustained second- and third-degree burns covering more than 60 percent of his body and is in a medically induced coma.

“Another month, another explosion,” State Rep. Mike Foote told the commission. “These are all very tragic circumstances, but unfortunately they’ve become all too routine. I think what they tell us is that a dangerous industrial activity does not belong next to homes and schools. Even if people do things correctly, even if they do everything right, these things are dangerous operations.”

State Senator and Boulder County Commissioner candidate Matt Jones also spoke about victims of oil and gas explosions, quoting Firestone victim Joey Irwin’s brother, Brett, in his support of Prop 112: “I was hoping it would wake up Colorado a little bit. It started as greed, it still is greed, and if we don’t do something about it, it will happen again.”

Those who oppose Prop 112 attempted to counter this narrative by ensuring that the current rules that govern drilling in Colorado are the strongest in the country, and that the ballot measure, if passed, wouldn’t have prevented the Firestone explosion.

“No setback or anything of that sort by the oil and gas commission would have prevented that. The problem lies within the cities and municipalities allowing 150-foot setbacks from existing wells. So if you’re going to have a rule or a law it needs to go both ways,” Charlie Schmidt who works for the oil and gas industry, told the commissioners.

Still, the hearing was dominated by speakers in favor of Prop 112. They asked the commissioners to defer to the Colorado Court of Appeals’ March 2017 ruling in favor of the young plaintiffs in Martinez v. Colorado Oil and Gas Conservation Commission. The lawsuit has been ongoing since 2013 when Xiuhtezcatl Martinez of Boulder, along with other young people, first asked the COGCC to consider making a rule that prioritizes public health and safety over industry interests when considering permits, instead of trying to balance the two competing priorities as the commission has been doing in its current interpretation of state law. Although lower courts sided with the COGCC, the Court of Appeals supported the teenagers. The commission, with the help of Attorney General Cynthia Coffman, has appealed the decision and the Colorado Supreme Court heard oral arguments for the case on Oct. 16, without any indication of when to expect a ruling.

“You’ve sacrificed our children’s health and safety for the profits of the oil and gas industry and thrown away our children’s future,” Prop 112 supporter Elisabeth Glick told the commissioners on Monday. “The law of the land is the Martinez case, we ask you to stop permitting until we reach what works for the health and safety of this beautiful state.”

If passed, Prop 112 will still have to be signed by the governor before the COGCC would have to start considering it during its permitting process. According to an email from a senior attorney in the Office of Legislative Legal Services, Colorado General Assembly, it would likely take in the neighborhood of 30-60 days after the election for the governor to sign Prop 112 into law. That would make the likely effective date of Prop 112 sometime between Dec. 10 and Jan. 15, 2019.

Permits granted before the governor’s proclamation would be considered grandfathered in and allowed to proceed with drilling and production operations even if within 2,500 feet of vulnerable areas as set forth in the proposition. The fate of the massive backlog of pending permits is less clear.

When asked by BW whether or not pending applications would also be considered grandfathered, the DNR’s Duncan said the COGCC doesn’t know the answer to that question. Senator Matt Jones old BW that only the permits fully approved before the governor’s signature would be grandfathered in.

It appears that attorneys and the courts may yet get the final say when it comes to the status of the thousands of backlogged permits currently sitting at the COGCC.