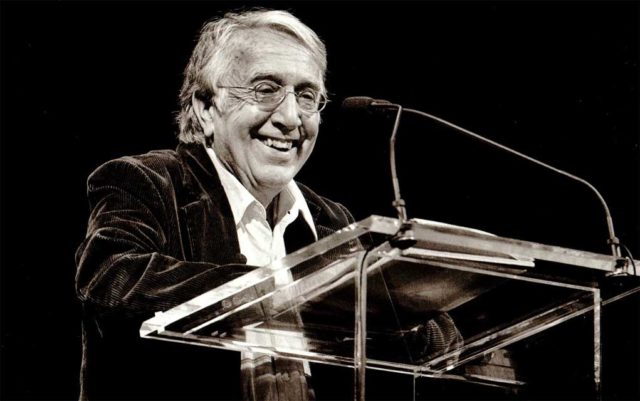 If you go to David Barsamian’s State of the World Address looking for quick solutions to the world’s problems, you’ll be disappointed.

“It’s more like stripping away illusions,” Barsamian says of his annual lecture. “A friend [told me], ‘If you don’t have an accurate understanding of what’s going on, any solution you might propose will go nowhere.’”

And so Barsamian speaks about the “state of the world” to educate people, to peel away “layers of propaganda.” There is no magic pill, no get-rich-quick Ponzi scheme, so to speak.

“I give all these talks and people want quick answers,” Barsamian says. “‘Tell me what to do. Give me a number. Give me a website, provide some elixir that I can drink right now and it’ll all be solved.’”

An old-school independent journalist, self-taught with no college degree, Barsamian educated himself through a lifetime of travel, learning along the way that there’s no simple answer to the chaos and strife around the globe.

He founded Alternative Radio in Boulder 30 years ago, even then taking a stance against mainstream media. From the station’s “world headquarters” on Folsom Street, Barsamian airs lengthy interviews with some of the world’s most renowned political activists and thought leaders: Eqbal Ahmad, Howard Zinn, Tariq Ali, Richard Wolff, Arundhati Roy and Edward Said. He jokes that he holds the Guinness record for most interviews with Noam Chomsky, but there’s no question that it’s true.

His most recent interview was with political activist, famed consumer advocate and former Green Party presidential candidate Ralph Nader. Barsamian spoke with the octogenarian for more than two hours.

Barsamian knows the key to change is activism. Despite his first-hand experiences and the depth of his understanding, or perhaps because of it, Barsamian is wary of telling people how to get engaged.

“You don’t want to be pedantic and say, ‘You do this because I’m so smart and you’re not and I’ve seen the light and you haven’t so follow me,’” he says. “I’m reluctant to do that anyway because I don’t think it’s productive. I think people need to own their activism so it’s authentic. The question is what should I do? There are so many things to do, so much work to be done. There are so many immigrants in this community who need English-as-a-second-language training. Whether it’s feeding the homeless or … volunteering at KGNU or interning at Boulder Weekly, but doing something where you feel authentic. It’s important to own it and feel authentic in what you’re doing.”

And, he reiterates, to unwrap the “layers of propaganda” U.S. citizens are exposed to each day, from the media, from political candidates and from the very government that purports to serve the people of the United States.

Barsamian admits he doesn’t know what he’ll say at the Laughing Goat on Sept. 12 when he gives his State of the World Address, but it’s a certainty he’ll have to speak to the impending U.S. presidential election — a topic of global intrigue.

“I’m assuming Hillary is going to get elected,” he says, adding without pause, “She’s not going to change anything; the economy will continue to be in stagflation, the rich will continue to get rich, there will be more and more income inequality and wealth concentration.”

Barsamian stops to make the distinction between income inequality and wealth inequality. When comparing income, two people can easily compete, even if one makes $30,000 a year and the other makes $50,000. The $20,000-a-year difference isn’t staggering.

But things change when you factor in wealth concentration: people who have stock options, hedge funds, property in New York and Paris, a yacht, golf club memberships. With these options, someone with a $50,000-a-year salary is far wealthier than someone who makes $30,000.

“The way it’s argued is somewhat deceptive,” Barsamian says. “If CEOs would tamp down their packages that would be better. In the ’50s I think the ratio of CEO-to-worker pay was in single digits. Now it’s triple digits.”

This, he says, will not change in a Hillary Clinton administration. And neither will U.S. military intervention across the globe.

“In fact, there’s a good chance there will be more U.S. military aggression under Hillary. She is a self-proclaimed [war]hawk who declared once again that America is the exceptional nation in the world and has a unique role to play in the world. This has been the formula and the platform for U.S. invasions, occupations, coups d’état, economic warfare, which was conducted on Cuba for decades and decades. Iran is another example of economic warfare. When you challenge Big Brother there’s a big price to pay and the U.S. exacts it. I don’t think things will change dramatically for the better under Hillary and I think people will be very angry.”

Anger, he says, is at the heart of this presidential election.

“All the experts are talking about white, working-class anger. It’s not just white, working-class anger — it’s more broad than that,” Barsamian says. “Here you have this charlatan/narcissist (Trump) amplifying that rage, but it’s much deeper than that. I think it’s a dangerous time and what I fear is going to happen in [the next presidential campaign] is there will be a smarter, smoother Trump who won’t insult people to their face, who will master the rhetoric, who will cloak everything in patriotism and nationalism and that will be a real danger.”

Barsamian says it’s important to consider the possibility of a future “Trump-like” candidate because the world of fiction has often predicted real-world scenarios. He’s been reading Sinclair Lewis’ “It Can’t Happen Here,” a 1930’s novel about a presidential candidate named Buzz Windrich who campaigns on a platform decrying the explosion of promiscuity in American society and the reign of what he sees as an overly liberal press. Windrich wins the election and quickly establishes a totalitarian state.

Barsamian also points to alternative history novel The Plot Against America by Philip Roth, where Franklin Delano Roosevelt is defeated in the presidential election of 1940 by Charles Lindbergh and anti-Semitism becomes widely accepted in the U.S. Then there’s All The King’s Men by Robert Penn Warren, a fictional tale based on former real-life Louisiana Governor Huey Long, who served from 1929-1932. Long, and the character Willie Stark from Warren’s novel, was a demagogue an gifted orator. Despite Long’s outspoken denunciation of concentrated wealth and unwavering support of funding for public works, education and old-age pensions, he was questioned for his tactics. Many called him a dictator.

Barsamian says fiction like this helps people understand how politicians win allegiance, how they instill and propagate fear so voters turn to a candidate who says they “have the answers and can protect society.”

“In the country today you see nostalgia for an imagined past,” Barsamian says. “It’s completely made up. ‘Things were so much better then.’ What do they mean by that? It’s laced with racism and misogyny and those kinds of elements.”

And while it’s important to see these political platforms for what they are, Barsamian says, it’s all a distraction.

“Meanwhile the overriding critical issue is climate change,” he says. “And how would a Hillary Clinton administration address that beyond recycling paper and cardboard and glass and driving fuel efficient cars and these kinds of cosmetic things like biking to work that lull people into a sense of ‘we’re doing something about climate change.’”

It requires a hard look at the capitalism system, which Barsamian describes as being “based on the plunder of resources and maximizing profit.”

“That is incompatible [with addressing climate change]. The current capitalist system is laced with corporate socialism: subsidies, tax breaks, loopholes, direct funding. Can that system really change, avert what is going to be a collision course with nature? And we’re not talking 22nd century. This is now, within your lifetime. This is within decades.”

And the global unrest from climate change is already visible.

“The Syrian aggression was triggered by the worst drought in its history,” Barsamian says. “Food prices skyrocketed, farmers couldn’t farm their land so they moved into cities, so you had that kind of volatile cocktail where rural people are now in an urban setting. The same thing happened in Egypt; it was about drought, food prices going up and revolts. There are more people on the move than ever before. It’s a very volatile situation and we shouldn’t be lulled into a false sense of community, a false sense not just of civility but also of comfort, and go back to, ‘How is the new rookie quarterback for the Broncos?’ And, ‘What about the latest Kardashian scandal or affair or whatever the distraction of the moment is?’ We should not take our focus off this threat to civilization as we know it which is represented by climate change.”

It’s clear there are already climate refugees. But to the Western world, en masse, these are non-people, “disposable people,” Barsamian says.

“So who cares if the Maldives go under or Tonga or other islands in the South Pacific or Bangladesh,” Barsamian says. He references the German anti-Nazi theologian and pastor Marin Niemöller who famously said:

“First they came for the Socialists, and I did not speak out —

Because I was not a Socialist.

Then they came for the Trade Unionists, and I did not speak out —

Because I was not a Trade Unionist.

Then they came for the Jews, and I did not speak out —

Because I was not a Jew.

Then they came for me — and there was no one left to speak for me.”

As Americans, Barsamian says, it’s OK to look at our country and see what we can do here that can affect the world. And maybe we should start by questioning the very foundation of American democracy.

“We have to look at electoral politics — overall is that the answer?” Barsamian asks. “What office did Mahatma Gandhi hold? What office did he run for? What office did Martin Luther King Jr. ever hold? It’s possible to make changes without going through the electoral system, because the system is so corrupt and gerrymandered to death that one has to consider outside impulses that can transform society.”