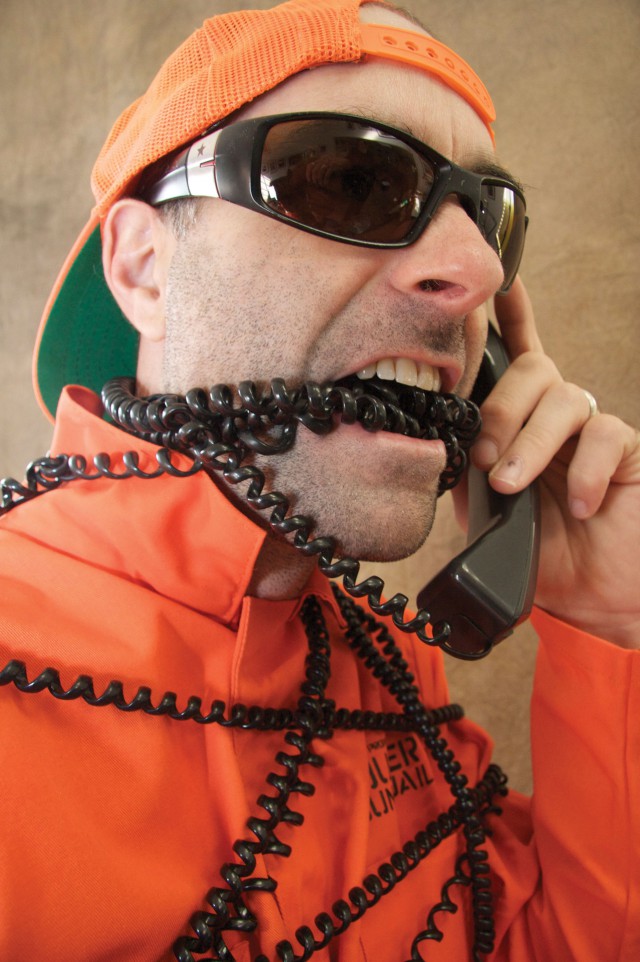 It’s a well-known fact that prison inmates with strong family and community ties are less likely to wind up back inside the joint once they are released.

“My first few years inside, all I thought about was escaping,” he says. “I got high in the county jail. Even if I got out, I didn’t see options. I saw myself as prey.”

Released in 2006, he’s now a case manager at Turnabout, a Denver nonprofit that provides assistance to returning inmates — 5,000 of them in 2010.

This April Hassan and Turnabout’s director, the Rev. Tina Yankee, spent two days teaching ethics classes at Metropolitan State College of Denver — a surprising undertaking for a man who, his wife says, “always felt he was going to go down in a hail of bullets.”

Imani Latif met Hassan in New York City when both worked for the Department of Health.

“He was my best friend,” she says. “I fell in love with him, but he was engaged to someone else.”

They married other people. She had a son. He moved to Colorado. Her marriage ended. When Hassan’s former wife wrote to Imani saying, “I’m leaving him. He’s in prison,” the two picked up where they left off.

She moved to Colorado and they married in 1992.

“My wife stayed with me for 18 years inside, and if not for that support I wouldn’t be talking to you now,” Hassan says.

“My perception of his life was different than his,” she says.

They wrote letters. Imani drove two hours each way to visit. An AIDS counselor, she couldn’t afford prison call costs, but Hassan got a “high-paying” job, $150 a month, in a prison print shop and phoned her once a week.

“It was cheaper back then,” he says. “She told me I was a good person, I could go back to school, have a life,” Hassan explains. “That seemed far-fetched, but the chance to go to that visiting room and see her made me walk away from trouble.”

Imani is now the founding director of It Takes A Village, a nonprofit that addresses health issues among people of color.

Hassan thinks prison phone-call costs in Colorado are “prohibitive.” Add in the difficulties of visits, he says, and “it appears they don’t want families to be together. It’s something deliberate.”

He suspects that call profits go to wealthy owners of the phone companies.

“Studies show family contact helps motivate prisoners to do well and complete programs,” says Margaret diZerega, director of the Family Justice Program at the Vera Institute of Justice in New York City. “An outlet to talk about frustrations lowers violence, and inmates with family support have fewer parole violations and less homelessness.”

Families complement or substitute for public programs, especially when prisoners get back out, so “it doesn’t make economic sense to put barriers in place,” diZerega explains. Barriers to contact include the cost of phone calls, driving from a distance, child care costs and time off work.

Taxpayers don’t pay for prison phone calls. Inmates and their families do.

You can’t call an inmate. The inmate calls you from a public phone in a cellblock, but only if you’re on a pre-approved list. An automated voice tells you the call is from a particular prisoner and asks if you want to accept it. Calls are limited to 20 minutes.

One reason rates for calls are high is that prisons pay for specialized phone equipment and security costs.

However, if a state corrections department adds a surcharge to each call — and all but eight do — or hikes up the charge for each minute, or both, the resulting rates generate large profits. These profits, or “commissions,” usually go back into corrections budgets.

Commissions have been called “kickbacks,” but courts have repeatedly ruled them legal.

Last April, Prison Legal News (PLN), a national monthly based in Vermont, published a groundbreaking 50-state study of prison phone contracts. It detailed the millions of dollars in profits states extract from prisoner phone use. The national total came to $152.44 million in 2007-08, PLN said.

The PLN state survey also showed that Colorado prisons had, and still have, the highest rate in the United States for local collect calls — $7.35 for 20 minutes.

“I was born in Denver,” says Don Walker, “and I have a lot of family here, mostly incarcerated.”

A repeat offender finally sentenced to 16 years on drug charges, he did time with his own dad: “He was my cellie. They’ll put you with a family member if you’re both inside because people will stay out of trouble if they’re in a cell with an older brother, an uncle.”

While Walker was imprisoned, his father “died in the joint at age 73, and I couldn’t go to the funeral,” an experience that turned Walker’s life around, he says. He was overcome with grief.

“I started to accept responsibility for my actions.”

He organized a men’s group, stayed away from troublemakers, and educated himself about the law to the point where he could represent himself in court, get his conviction overturned, and win his own release.

During his earlier imprisonments, calls cost less and Walker spent most of his prison-kitchen wages of $30 to $60 a month phoning his mother, who was living out of state, and calling a sister and friends. That changed in 1993.

“Phone charges just shot up,” he says. “I didn’t talk to anybody.”

His family couldn’t pay for calls or for visits, and “I had no money,” he says. “We wrote letters, but they’d take weeks to arrive.”

Then, in 2007, Colorado sent 700 inmates to an Oklahoma prison, and Walker was one of them. All contact with his family and friends stopped.

“I started to believe nobody cared about me. ‘Leave him in there to die,’” he says. “But when my mother in Texas reached me, she said, ‘I’ve been looking for you for over a year.’” Out of prison in 2010, Walker now says the lack of contact with family and friends was a good thing. It helped him put his old ways behind him.

He got a job as a flagger with a traffic management company, took classes required by parole, became a Turnabout volunteer, started dating a woman who worked for the schools, Princess Greene, and got elected to the board of Mile High United Way in Denver. He sometimes worked 12- to 14-hour days.

Courts have ruled that prisoners do not have unrestricted rights to phone calls. They’ve said that high rates and other constraints don’t violate inmate rights. So there are no legal issues when the Colorado Inmate Phone System (CIPS) sells pricey phone time through prison canteens.

Colorado prison debit calls are cheaper, and a 20-minute debit call anywhere in the state costs $3.85. However, the “J-Pay” system many families use to put debit-call money into a prisoner’s account charges high fees, taking $2.95 out of a $20 deposit.

This July, Colorado inmates placed 126,604 phone calls, and of these, 77.2 percent were debit, Department of Corrections (DOC) Director of Finance Karl Spiecker told Boulder Weekly. Only 9.9 percent were the high-rate collect calls, he says, and 12.9 percent were cheaper pre-paid collects.

“Most people who go to prison are poor,” Don Walker says. “That’s why they’re in there, caught up in dysfunctional families, a generational pattern, lack of resources, opportunities, a need for more education.”

Poverty boosts recidivism, he says. “You don’t see wealthy people in and out,” he says. “If you go back in you see the same people all the time, and 98 percent had public defenders.”

Walker, who identifies himself as a black man, doesn’t think the judicial system is racist.

“It’s not a black, white, Mexican thing,” he says.

“Most of these families don’t have a lot of money, and every time [an inmate] calls collect, it costs almost $8,” she says. “It doesn’t take many of those and the families can’t pay their phone bills and end up getting their phones shut off. A lot don’t have money to buy gas to visit.”

She continues, “The prison really doesn’t care if they get to talk to their families. I think it’s important for them to have contact. Good or bad, they are still family. Many have completely lost contact.”

“I was an old, hard-nosed convict,” says Hayward Lawson, or “Habe,” the son of a Kentucky coal miner.

In 1973, after repeated run-ins with the law as a thief and burglar in Colorado, Lawson wound up with a life sentence for a murder he says he didn’t commit.

A high school teacher, Dianne Tramulto, began writing to him, then visiting. There were frequent phone calls that Tramulto paid for, and they were married by proxy in 1982.

“He was the real deal,” she told StoryCorps.

“She was this sexy Italian broad,” Lawson was quoted as saying.

He was paroled in 2004. Lawson now mentors youngsters on probation. He’s part of the team creating L-TOP, a new corrections program for long-term offenders. Tramulto, now Tramulto-Lawson, is the president of the state chapter of CURE.

“I was a piece of shit, and without Dianne, I’d still be inside,” Lawson says. “Society threw me away. She gave me a direction, motivated me to change, and we’ve been ‘hand in hand’ ever since.”

“Dianne is my angel,” he says, adding that their frequent phone calls “gave us a marriage.”

But they were expensive. Like Hassan Latif, Lawson thinks phone profits likely fund luxuries for someone — “cars, a fancy lifestyle.”

The number one beneficiary is education services for inmates and educational equipment and supplies, he says. That includes library services and GED classes. The money also pays for recreation equipment, cable TV, faith-based and volunteer programs and grooming services.

Some Colorado advocates and people with loved ones inside say these programs are so important to prisoner welfare that any phone commission cuts will make inmate life even harder.

“Cutting inmate programs is not the only option if you reduce phone costs,” says Christie Donner, director of the Colorado Criminal Justice Reform Coalition, an alliance of 100 groups.

Colorado sends 4,100 people a year back inside for technical parole violations, she says.

One of the people back inside for a parole violation is Walker. Greene, his girlfriend, says he’ll be back out in November.

“He was exhausted, working long shifts into the evenings and parole wanted him to take and pay for more classes at night,” she says of the circumstances surrounding his parole violation.

“He went back to his old neighborhood for a party. I tried to stop him.