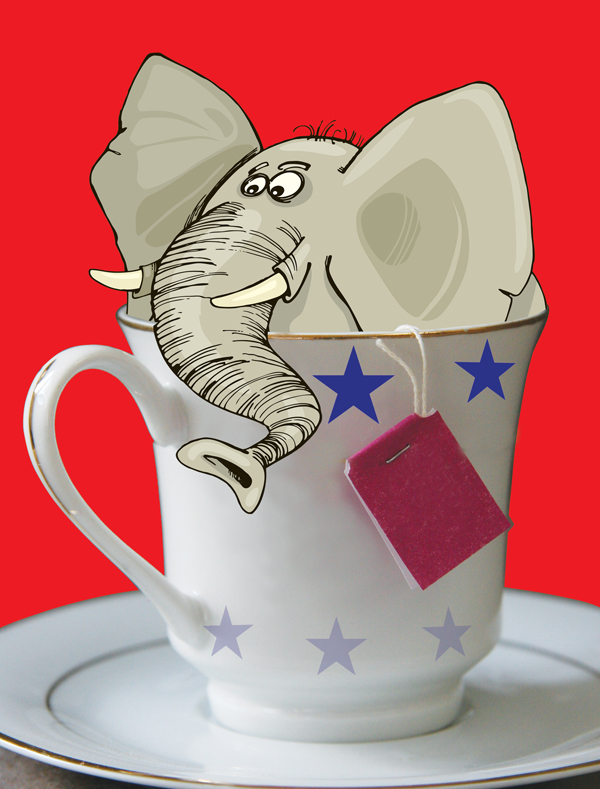 The tight races for governor and U.S. Senate have some wondering what effect the Tea Party movement in Colorado will have on those contests and certain ballot initiatives.

Rasmussen Reports released survey results last week showing that Tom Tancredo is now in a statistical dead heat with Democrat John Hickenlooper, when just a couple of months ago it looked as if Hickenlooper would win the race with ease. The Republican/Tea Party vote was expected to be split between Tancredo, who is running under the banner of the American Constitution Party, and Dan Maes, who is the Republican nominee, but Tancredo is surging well ahead of Maes.

Republican Ken Buck is slightly ahead of Sen.

Michael Bennet in the U.S. Senate race in several polls, which some attribute to the Tea Party factor. It has Democrats trotting out heavy hitters like former President Bill Clinton, who visited Colorado this week to stump for Bennet.

And several ballot initiatives — especially the three that would cut taxes and government debt and the one challenging “Obamacare” — could see an infusion of support if a sea of Tea Partiers head to the polls, even though all four measures are expected to fail.

The Tea Party’s major platform is reducing taxes and the size of government. The movement opposes the federal health care reform act, for instance, and other measures they perceive as expanding government’s reach.

Nationally, Democratic pundits have tended to be derisive of the Tea Party, especially its more extreme, fringe elements, which have even been accused of racism on several occasions. Political observers say writing off the Tea Party would be unwise.

“The Democrats have been dismissive of the Tea Party and blaming voters for what voters are feeling,” says Ken Bickers, a political science professor at the University of Colorado at Boulder. “They’re missing that this is a fairly large grassroots movement.”

It’s never a good idea to diss voters or their concerns, even if they’re not your voters, because it can simply motivate and energize them, he says. According to Bickers, the Tea Party members attending the meetings and rallies are just “the tip of the iceberg, and what you don’t know is how big the iceberg is.”

Colorado Republican Party Chair Dick Wadhams agrees that Tea Party activism has been a boost to the Republican agenda.

“I think they’ve had a very positive effect on the process and injected new enthusiasm into the Republican Party,” he tells Boulder Weekly, adding that the Tea Party and Republicans see eye to eye on rolling back “reckless spending” at the state and federal levels, the repeal of the health care bill and the defeat of cap-and-trade proposals. “On basic issues of taxes and spending, I think there is very little difference.”

He declined to comment on what effect the Tea Party might have on the outcome of the anti-tax measures (Amendments 60 and 61 and Proposition 101).

The Republican Party has not taken a formal position on those measures, he says, but a majority of Republican state legislators oppose them.

Independence Institute President Jon Caldara, a self-described “Libertarian-leaning Republican” who speaks regularly at Tea Party events, says the movement’s grassroots, anti-establishment values are key to its success, because it has no established leader.

“What the left can’t handle about the Tea Party is there is no leader to go after,” he says. “It’s a leftist’s nightmare. … If someone claimed to run it, he or she would be immediately discredited.”

Caldara says it’s not a given that Tea Party members will vote Republican down the line, because they are “just as pissed off at out-of-touch Republicans” who ran up the national debt, for instance.

He also draws a parallel between liberals who opposed the PATRIOT Act and the Tea Partiers who want to reduce taxes, because both are seeking a decrease in government intrusion.

“This is an anti-establishment year, I think that’s pretty clear,” says Democrat Andrew Romanoff, the former Colorado speaker of the House who lost to Bennet in the Senate primary. “Certainly the Tea Party movement has energized a lot of voters who might not otherwise have been engaged.”

But Romanoff told Boulder Weekly that he doesn’t think the Democrats are underestimating the power of the Tea Party, like Republicans underestimated Democrats when the Dems took control of the statehouse and governor’s office in 2004.

“There are not many folks asleep any more,” he says.

“I can’t remember a year as topsy-turvy as this one.”

Romanoff says Tancredo motivates liberals to vote. “If you want three words to inspire Democrats, they are ‘Governor Tom Tancredo,’” he says.

Colorado Democratic Party Chair Pat Waak downplays the impact of the Tea Party, noting that the overall number of registered voters has not changed significantly.

“I don’t underestimate the group, but we have 3 million people in this state, and we’re talking about a few thousand people,” she says.

Waak also says she doesn’t place much credence in automated polls like those generated by Rasmussen, a group that she says oversamples Republican men and undersamples women, minorities and Democrats.

Waak says some moderate Republicans may even vote Democratic due to the Tea Party shift to the extreme right, especially “if they feel their party has been taken away from them.”

“Tancredo is a career politician who has gone back on his promises,” Bloedorn says, alluding to the former congressman’s broken pledge to only serve three terms in the U.S. House. “He’s not a man of character.”

Bloedorn agreed that the majority of Tea Party members will vote for the three anti-tax measures on the ballot as well as Amendment 63, which asserts that the state should not enforce the provisions of federal health care reform.

He stopped short, however, of predicting how Tea Partiers would vote on Amendment 62, which would ban abortion by defining a person as the beginning of biological development. Bloedorn called that one a “very personal issue,” adding, “I believe in choice, as long as the choice is made prior to conception.”

He also says Tea Party members lean right on illegal immigration, adding that undocumented workers “need to be treated just as they are, which is law breakers.”

But he countered the allegations of racism that continue to plague the Tea Party, saying that members of his group are inclusive of all ethnicities and not opposed to “legal” immigration.

Bloedorn says the Tea Party has been partially responsible for “anointed” politicians like Republicans Jane Norton (a former Senate candidate) and Scott McInnis (a former gubernatorial candidate) being “replaced by the people’s candidates.”

Lu Busse is chair of the 9-12 Project Colorado Coalition, a group that is very similar to the Tea Party — with an additional emphasis on adherence to the U.S. Constitution, as well as a set of nine principles and 12 values. The principles include “America is good” and “I believe in God,” and stress the importance of the family, honesty, justice, hard work, free speech and government answering to the people. The term 9-12 refers to the day after Sept. 11, 2001, when America was united instead of squabbling over partisan politics.

Busse agrees that Republicans can adopt the establishment view just as easily as Democrats. She calls it the difference between “the country club class” and the “country class.”

Like Bloedorn, she says her group will likely vote for the tax-killing and anti-Obamacare measures, but has not taken a stance on the personhood amendment.

When asked if some services the government provides are valuable, Busse replies, “We’re not into ‘no government.’ We believe in limited government.”

She says individuals should wield the most power, with decreasing levels of control as you go up the line.

“The least amount of power should be with the federal government,” Busse says. “We align with Republicans, but not when they want big government.”