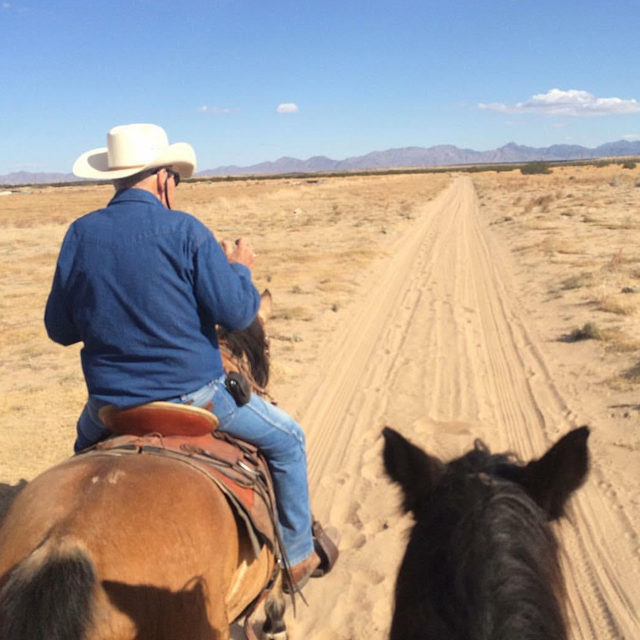 Grandpa isn’t one to sit idle. Even at 90, he wakes up early every morning and walks at least a mile with Grandma, my aunt and her dog Junior. He uses a large whittled walking stick, and bellows Junior’s name every once and awhile to make sure he never gets too far away.

After the walk, he goes to the stables behind my aunt’s house next door and feeds the horses and cleans the stalls. Then he walks back home for breakfast, coffee and the paper.

When I visit, we spend a good hour or so working on the crossword puzzle, while talking about any number of things — from politics, to movies, to what’s happening with different branches of the family, to his role in the church choir and the Sheriff’s Posse.

Then I always offer to help him with whatever project he has going. Two summers ago we built a deck. Last Thanksgiving we dug irrigation ditches throughout the yard.

When he’s not busy with work around the house, he goes out to his wood shop to fix odds and ends or make block sets, large wooden trucks and pull toys for my nephew and nieces. Or he’ll go out to the Single Action Shooting Society range and shoot guns at targets set against a backdrop of old Western storefronts and swinging saloon doors.

A couple times a month (almost every day when I visit and can join him) he rides his horse Thunder in the Arizona desert around their house. After about an hour, I’m usually ready to go home, but he’s always up for another mile or two.

Recently on these rides, I’ve started asking Grandpa about his childhood. He settles into his saddle to answer, gazing out on the horizon, looking at Mexico off in the distance.

“I didn’t really read books before starting school because we didn’t have any,” he told me not too long ago. “But when I started reading in school, I’ve never quit. I read all the time.”

Grandpa has always been a voracious reader. Often in the afternoons, I’ve found him dozing in his living room recliner, a book sprawled open across his chest. For my birthday this year he sent me a note saying: “I just read Beau Geste, an interesting story. I have been reading East of Eden by John Steinbeck. I have to read it in pieces, too much to read continuously.”

When I call a few weeks later to check on his progress, he’s already finished the 600-page novel. Although it may have been hard to start, he says, once he got going, he couldn’t stop.

“It’s really an interesting book. I understood a lot of what was going on because to a certain extent it was part of my lifetime,” he says. “In places it gets to be kind of depressing. But it’s pretty true, the way things happened at that time.”

Grandpa grew up on Granddad’s (my great-great grandpa’s) cattle ranch, the youngest of three boys with a younger sister to boot. North of Phoenix, Daddy (my great-grandpa) and his two brothers managed the ranch for their father, each with their own homestead to raise their families.

Times were tough during the Great Depression and Grandpa’s family had to move to town since there wasn’t much of a market for beef. But they never went hungry, living off the cattle they didn’t sell and fresh vegetables from the garden.

By 1934 the tide had slowly begun to turn and Grandpa and his family moved back to Granddad’s property, where he joined his dad and older brothers “pretty well watching the lower end of the ranch.”

They’d go out on horseback all day with some jerky and a few dried apricots in their pockets, herding cattle, fixing fences and doing whatever else needed to be done. Sometimes they’d spend a few nights on different sections of the ranch, camping out and surviving off hunted deer meat they stored in their bedrolls during the day to keep cool in the desert heat.

“There was no room to pack books when we were going out that way,” Grandpa says. Plus, with the long workdays, “there really was no time for books. But I made up for it when I went back.”

In middle and high school, he was obsessed with cowboy novels, mostly those of Will James and Zane Grey, enthralled by the adventures of a not-too-distant past. “There were not a lot of Western genre at the time,” he says. But he loved “reality-based fiction about cowboys.”

After high school, like most young men back then, Grandpa was drafted into the Navy and sent to the South Pacific. “All the boys at the ranch, we decided when our name was called, we wouldn’t get a deferment, we’d just go,” he says. “It was a decision by all of us. We felt we needed to be a part of it. We couldn’t just sit back and let someone else do it. We just decided we’d do whatever was necessary.”

In 1945, his cousin and brother were drafted first. Then he followed a few months later with his oldest brother.

“The only book I read in the service was Ayn Rand’s The Fountainhead,” he says, unable to remember if he liked it or not. “I read it aboard ship and almost everybody on the ship got to read it. It just went from hand to hand around the ship. And you couldn’t dwell on anything. You just had to read and then pass it on to somebody else.”

He spent a year aboard ship, traveling from Japan to Guam to the Marshall Islands, including Bikini Atoll, home to the U.S. nuclear tests and which was later deemed unfit for habitation.

As the war ended, Grandpa returned to the States with thousands of other young men looking to make their way in the world. He went home to Arizona but, following the death of his business partner, Granddad had sold the ranch in the early part of 1946, while the boys were still off at war.

So Grandpa went into business with his uncle and cousin on a piece of land not too far away, but without much success.

“We were short of money, we didn’t have much in the way of equipment, it wasn’t a very good piece of property for what we wanted to do,” he says. “So we farmed it for about a year and then moved on.”

He went to work for Daddy on the farm he’d recently purchased, but there wasn’t much for him there either. Eventually, Grandpa decided it was time to study, getting a degree in animal science with a minor in agronomy from the Arizona State University in Tempe. He worked through school, helping Daddy or any number of his uncles and cousins on different ranches. During his senior year he picked up odd construction and mining jobs as well, just to make ends meet. But he still had time for fun. Among other activities, he was a square-dancing caller, which is where he met Grandma, handing off the microphone to dance with the pretty single girl who had just walked in.

They were married in 1953 and soon after moved to Yuma, Arizona, where they raised three kids, including my dad, while Grandpa was a livestock inspector for the federal government and Grandma worked in early childhood development.

And that’s when Grandpa started reading other genres. With the exception of The Fountainhead, he had mainly stuck to cowboy and adventure novels since grade school. Although he still devoured Louis L’Amour frontier stories and Elmer Kelton Westerns, he ventured into science fiction, fantasy and classic literature, reading the odd nonfiction story as well. Now he’ll read pretty much anything Grandma brings home from the library, while avoiding her romance novels all together.

“I have read so many books and not kept track of all them,” he says. “I have read good books and I try and remember who the author is to find more books. But I never write it down, and I find myself at fault now when I look back.”

But he knows he enjoys Tuesdays with Morrie, Angela’s Ashes, An Irish Country Doctor series and the mystery novels of J.A. Jance. And he loves Anne McCaffery’s fantasy Dragonriders of Pern series — still unable to convince me I’ll like them, although I enjoy listening to him try.

Sometimes he’ll pick up books on the free table at the library, happy to stop reading one he doesn’t like if it’s too depressing, graphic or poorly written. A few summers ago, he read one of my favorites, The Immortal Life of Henrietta Lacks, about the African-American woman whose immortal cervical cancer cells have been used for decades in scientific experimentation.

And he’s read several of John Steinbeck’s books, praising his famous works like The Grapes of Wrath and Of Mice and Men, while also admiring other stories of his like Cannery Row.

“He wrote about people, the way they were. At the time of those writings, authors generally kind of put an icing over things like that and you didn’t get that with Steinbeck,” he says. “He told it like it was.”

Which brings our most recent phone conversation back to East of Eden, where I painfully admit I haven’t read it, or any other Steinbeck book for that matter. Although I do remember watching a few movies based off his work in school.

“I’ll tell you what, if you want it, I’ll bring it with me when we come over for Christmas,” he says. “It’s my old paperback but I think you’ll like it.”

I haven’t seen Grandpa since his 90th birthday party in May. I usually try and see my grandparents around the holidays but over Thanksgiving he was in northern Arizona hunting with my uncle. They didn’t find any elk like they were hoping for, but they still enjoyed camping out as temperatures dropped below freezing, he says.

So for Christmas I’ve convinced them to make the four-hour trek to my dad’s in California. I won’t be able to ride horses with Grandpa or help him with his projects and yard work, but we will get up every morning and go for a walk, sit and drink coffee while eating breakfast and doing the crossword. I’m sure we’ll talk about books, the ones we’re currently reading and the ones we’ve been meaning to share with each other. I’ll ask him questions about his life and he’ll answer, telling it the way it was.

Although Grandpa originally said he read Atlas Shrugged aboard ship, it was actually The Fountainhead.