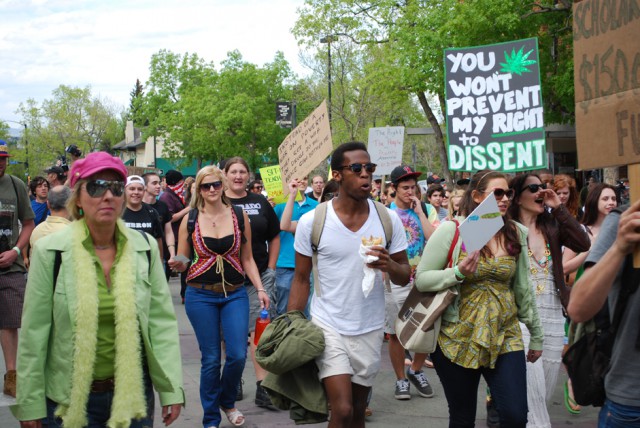 For the third consecutive year, the University of Colorado Boulder will spend upwards of $100,000 to close campus on April 20 in its effort to smother anything resembling a 4/20 marijuana smokeout, which the university says has become too disruptive.  But only a small crowd of 1,000 or so students turned up for such an event in 2012. And, a year ago, because the pot-friendly date fell on a Saturday, no one even bothered to organize a 4/20 event on the campus. Many observers say that with recreational marijuana now legalized and April 20 once again falling on a weekend, there is no 4/20 event to protect anyone from this week.

The $100,000-plus estimated price tag is based on spending from the previous two years, says CU spokesperson Ryan Huff. This includes the cost of increased law enforcement officers, barricades, parking and signs. Huff admits that the cost of closure is double what the university spent to secure and clean campus when the event was allowed to take place — between $50,000 and $55,000 — but he defends CU’s stand as a short-term investment.

“If [we] were to just … allow this event to go on, allow disruptions, over, say, a 10-year period, that could be $500,000 [we’re] spending to try to really just lessen impacts versus what we’ve done here,” says Huff. “We’ve spent more money on an annual basis, but we’re hopeful in the years ahead we won’t need a large police presence; we won’t need to take actions to close campus.”

The CU administration spent north of $124,000 to close campus in 2012, which included dumping fish fertilizer on Norlin Quad to make it smell so foul as to be a deterrent. The CU Student Government (CUSG) also shelled out more than $150,000 to bring hip-hop singer Wyclef Jean to the Coors Event Center to provide would-be revelers with a cost-free alternative to toking up on campus grounds. Despite this massive combined anti-4/20 expenditure, more than 1,000 students still gathered on the grass of the quad south of the Duane Physics building to celebrate 4/20 on the “closed” CU campus. Student leaders estimate that at its peak, the Wyclef Jean concert drew at most 1,000 students, leaving vast tracks of open space in the 11,000-seat arena.

The combined 2012 expenditure cost more than $278,000. According to Lauren Cross, director of communications for student government, this year’s approach is different. Student government has spent only $37 this year printing flyers to remind people that campus is closed.  While she didn’t have an exact number for 2013, Gross says that the student government spent less than $50 that year.

Huff says the university administration can’t know this year’s exact closure cost until they collect invoices from the various agencies that are hired to help, but he says this year will look similar to last year in terms of police presence and expenditure, which was around $108,000. Huff emphasizes that the money doesn’t come from tuition or taxpayer funds, but from insurance rebates.

“This money can only go toward items to improve campus safety, so 4/20 would be one of those operations,” Huff says.

But the university has a choice in how to spend the rebate. Huff said that extra lighting in dark areas or more emergency phones on campus would both be supported by these insurance rebates, and the university is free to choose safety projects without insurance company approval.

University officials have maintained that safety and a disruption-free environment are the driving forces behind the 4/20 closure. People have been gathering at CU to show their support of marijuana for more than 20 years. The event rallied an estimated 10,000 people at its height, but never resulted in violence.

But Huff says that the potential was always there.

“In past years, people have been climbing up trees 50 feet in the air and if people were to fall, you have the potential for injury or death,” Huff says. “Also, if you have someone in the middle of the crowd who needs medical aide, you have public safety risks there as well.”

While other events on campus, such as football games, draw large crowds that pose safety threats, Huff says the difference is permitting, which no one ever obtained for 4/20.

“Football games support the mission of the university,” says Huff. “These are student athletes. These are events that have permits, medical staff on site and law enforcement on site. Lots of event management goes into it. With 4/20, no one ever requested a permit. No one pays for bathrooms or security and other things that go into planning an event.

“4/20 is right in the middle of campus, most of the time during the week when classes are going on,” Huff adds. “It’s very disruptive. There’s a big difference between a football game on a Saturday in the stadium farther from the heart of campus.

While 4/20 falls on a weekend day for the second year in a row, Huff says that makes no difference.

“This is a busy place seven days a week, regardless of whether it’s on a Sunday or not. We still have activities, residence halls; dining, studying, people who want to throw a Frisbee around.”

Some citizens, like Boulder attorney and political activist Dennis Blewitt, say there’s no reason to close a public university.

“Ideologically, closing a campus, particularly a state university, is wrong. Basically, morally, intellectually it’s wrong,” Blewitt says. “It’s imposing somebody’s belief system upon others. Seems contrary to what the education system is for or about.”

Blewitt has actively challenged the university’s right to close campus to non-affiliates, joining other marijuana activists in filing a suit against CU in 2012. The suit ultimately failed.

Both Blewitt and Huff say they are unaware of any groups that plan to demonstrate at CU this year.

“It seems awfully calm this year,” Blewitt says. “I think a lot of people think just because it’s been legalized, or the recreational thing has been legalized, there’s no need to protest, and maybe it would be celebratory. Maybe some people miss the point of the whole 4/20 deal anyway.”

When questioned about whether the campus closure was an infringement on free speech, Huff said he thinks free speech “is alive and well” on campus.

“I think free speech is alive and well. The student government put on a marijuana symposium on April 2, which was a great chance to exchange ideas,” Huff says of the event that brought marijuana experts to campus for a town-hall style meeting.

“That’s a good example of the free speech that we love to see on this topic,” Huff says. “But 10,000 people in one area that are there to just smoke marijuana for the day is a different story.”

From noon to 6 p.m., Huff says that law enforcement officers will be posted at major entrances, asking students, faculty and staff to show the university IDs. Those with no IDs will be informed of the closure and asked to leave. For those who make their way to the interior of the campus with no ID, Huff says there is the potential to ticket for trespassing.

“But we’re going to do as much as we can to educate people before we go down that path,” Huff says.   According to Cross, a student government survey conducted this year indicated most participants don’t want the 4/20 event on campus.

“They don’t love the closure or the tactics taken to close campus with ID checks, but most of them at this point, from this survey, were pretty OK with the 4/20 event not taking place here,” Cross says.

The students who don’t want the event on campus will likely be pleased again this year, as it appears, like last year, that no such event is being planned by anyone. So the question becomes how will the CU administration and the various law enforcement agencies who will be creating a police state to shut down the university measure their success, particularly in economic terms?

Is $100,000 too much to spend to stop a nonexistent event? Is taking away the public’s right of free movement on the campus of a university it funds too high a price to pay, considering that there are no plans for an event?