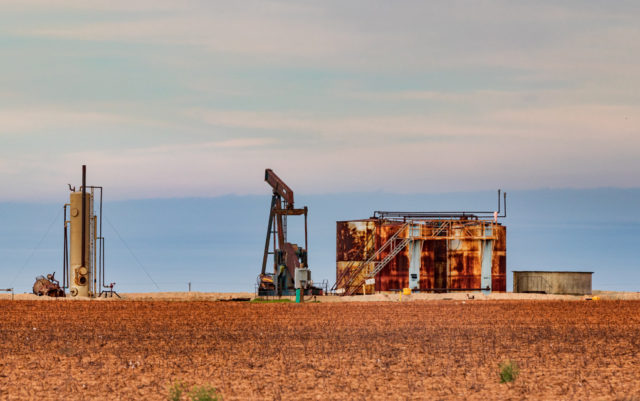 Sometimes, when I close my eyes, I can still seem them. The ranchers, the men in khaki pants, the school teachers walking along a riverbank. Walker Stapleton. I hear their cries: “…lose my job,” “…bridge fuel to a clean energy future…,”“Fracking pays for my students’ crayons.”

Prop 112, if the ads from two years ago aren’t also burned in your brain, was the ballot initiative that would’ve instituted a 2,500-foot setback for oil and gas operations from schools, homes and other buildings. The oil and gas industry spent tens of millions of dollars to defeat it (and fund those ads along the way).

Now, another ballot initiative, should organizers collect enough signatures to get it before voters, is on the horizon: This time, it’d ban fracking entirely in Colorado.

Thomas Quay Williams, of Eldorado Springs, has begun the filing process to put a complete fracking ban on the ballot for 2022. Williams says the arguments of 2018 — that it’ll cost the state millions in lost revenue as well as thousands of jobs — don’t stand up anymore.

“Our economy is based so much on tourism, high tech and quality of life that the oil and gas industry is threatening the rest of the economy,” he says. “They have no leg to stand on; not economics, not environmentally and not science.”

There have been efforts to limit fracking (setback-related initiatives in 2014, 2016 and 2018) and aspirations to get a fracking ban before voters (2016, and earlier in 2020) — and of course, Longmont had its voter-approved fracking ban overturned by the state Supreme Court. But Williams believes the Colorado community at-large is ready to put it to a vote.

“There’s an urgency to this issue. I feel like with the fires this year, the public has had enough. We can’t go on like this. We gotta do what we can,” he says.

Williams is a mountain guide who has been involved with the progressive group Our Revolution, as well as East Boulder County United. He drafted the language for the ballot initiative with an attorney, James Newell, of Boulder.

Williams and Newell initially received approval to proceed from several state agencies but ultimately failed to appear at a title board hearing after Newell stepped away from the process to handle other obligations. Williams says he is looking for another lawyer to help re-file the paperwork and push the initiative through the process.

In its current form, the ballot initiative would ban hydraulic fracturing due to its “detrimental impacts on public health, safety and welfare, the environment and wildlife.” It would pertain to an oil and gas operation regardless of when they received a permit to drill — that is, they couldn’t be grandfathered in after it passed. And it would give citizens the right to file a lawsuit to enforce the ban — “because our government officials likely won’t,” Williams writes on the group’s website,
frackingbancolorado.org.

“The idea here is that we know that the COGCC has historically been more or less a subsidiary of the oil and gas industry,” Newell says. “We were looking at this from the standpoint of, how do we make sure the fox isn’t guarding the henhouse here?”

Should Williams re-complete the filing process and get authorization to start collecting signatures, there are already obstacles in its way, as he learned in the first go-round. In a review by the Colorado Legislative Council, which is required to review ballot initiatives that amend the state constitution, Council directors outlined a number of issues Williams and his future legal representation would need to sort out.

First, the financial impact. The Legislative Council is required to produce a fiscal impact statement for any ballot initiative that makes it before voters, but also considers input from proponents of such measures. In a Sept. 21 letter to Williams and Newell, the Council tipped its hand at how it might produce its fiscal impact statement.

In the letter, the Council asked if Williams and Newell had considered that should the initiative pass, it “would eliminate the severance taxes collected on the production or extraction of oil gas derived from hydraulic fracturing.” In 2019, oil and gas severance tax brought in $235.7 million, but as recently as 2016, the revenue was as low as $4 million, requiring distribution of general funds to cover oil and gas regulatory work. Colorado currently has the lowest effective severance tax rate of any Western state.

It also asked Williams and Newell if they considered how passage of the initiative “would significantly reduce property taxes that local governments collect on oil and gas leaseholds and lands, which property taxes help fund school districts?” And it asked them for alternative funding mechanisms for those districts.

Williams says transitioning to a green energy economy could replace some tax revenue, and that property values would likely increase in areas where fracking sites are no longer operating, or are stopped from operating in the first place. The challenge of replacing those funds, he says, “cannot be allowed to strangle the need for oil and gas to pack up its malignant industry and hit the road.”

The Council also asked if Williams and Newell believed the initiative would “effectuate a government taking of private property.” If so, they’d have to prove how they would compensate property owners, i.e. oil and gas companies.

More broadly, Newell says what makes it tricky is that even if a government enacts a well-intentioned rule to protect public health and safety, businesses can claim it has a deleterious financial impact.

“That really curtails what you can do as the people to protect yourself. All of a sudden you owe money because you did something for the health of your state and environment,” Newell says.

Both Williams and Newell expect legal challenges should this pass.

“I’m confident with the drafting of this, I’m not necessarily confident the courts would not strike it down. I do think this is good for what it’s trying to do,” Newell says.

One aspect of the initiative Newell couldn’t work in, but that a subsequent lawyer might be able to, is a clause that requires oil and gas to pay for cleanup of wells. Currently, with oil and gas companies consolidating and several filing for bankruptcy, critics of the industry claim they haven’t reserved anywhere close to the billions of dollars it’ll take to cap and maintained abandoned wells. (For more, see News, “Footing the bill,” June 18, 2020,
boulderweekly.com.)

There is likely to be mixed support from environmental groups and policy makers, based on a couple background conversations. Some are cautiously optimistic, but skeptical Williams can push this boulder up the hill, others think it stands no chance in court.

But there might also be renewed support locally, which is of course no surprise in Boulder County. As the prospect of a drilling site in Niwot nears, citizens have asked for stricter regulations from the Board of County Commissioners. Failing adequate action from the Board, advocates of stricter oil and gas regulations may latch on to their next best hope: a 2022 fracking ban.

Regardless, Williams says just creating conversations throughout Colorado about a fracking ban could have benefits in its own right, regardless of if it ultimately passes.

“Even if it only antagonizes oil and gas, I think it’s worth it,” he says. “Just to put them on notice. It’s about building community, getting the issue out there.”

Williams anticipates a support-gathering effort, envisioned for some time next year after the pandemic yields, to include concerts, rallies, lectures and events.

And as Williams pointed out, New York state banned fracking, why not us? Conversely, he says it could start a nationwide movement if successful: “If we pass it in Colorado, why not in other states?”