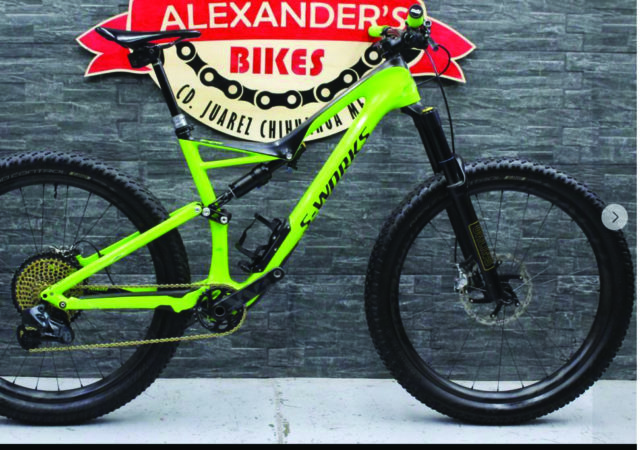 Then, in November, the office of the Colorado Attorney General Phil Weiser announced that they had indicted and arrested eight individuals in connection with the crimes, via “Operation Vicious Cycle.” It was a huge breakthrough in the case and a huge victory for detectives and police.

“This is the kind of case that required a team effort of different agencies from around the metro area,” Michael Dougherty, District Attorney of Boulder County, says. “This indictment reflects that [bike theft] is an absolute priority for law enforcement.”

The multi-jurisdictional crime ring, as Dougherty calls it, had been brought down. But the question remained: Where had all those stolen bikes gone?

No one knew the answer to that question. Not until Bike Index, a nonprofit bike registry service, started getting tips about a Facebook user selling bikes possibly stolen from Colorado—all the way down in Ciudad Juarez, Mexico.

“It was on my backburner for a while, and then finally one day I took a look and haphazardly checked on six [stolen] bikes,’” Bryan Hance, one of the founders of Bike Index, says. He got onto the vendor’s regionally-locked Facebook page called “Alexander’s Bikes” and started checking the vendor’s inventory against bikes listed as stolen on Bike Index.

Of the six bicycles Hance checked, he says he identified four of them on the vendor’s page right off the bat.

“It was like, ‘OK, there’s clearly something here,’” he says.

Hance and his team figured out the seller’s posting schedule and started taking screenshots, cataloguing them into a file. They then quietly started reaching out to shops in Colorado that had been burglarized, groups on Facebook like “Denver Stolen Bikes,” and other connections they had in the Colorado cycling community, asking people to match bikes on the Facebook page with those reported stolen. They compiled an online archive where Colorado victims of bike theft can look to see if their stolen bike is (or was) with this vendor.

Many of the bikes being sold on Alexander’s Bikes had only been stolen weeks prior, Hance says. The bikes were moving fast, and selling for just under market-value. Some even had stickers on them from the shops they were stolen from, like Full Cycle in Boulder.

“This goes beyond casual,” Hance says. “If we had found bikes from Texas or other areas it would have been one thing, but they were all coming back to Colorado.”

For years there had been rumors of an organized crime ring stealing bikes in the U.S. and funneling them down into Mexico, but there hadn’t been any proof. Now at least, they had [I]strong[I] evidence for that theory—even if they couldn’t do much about it.

Eventually, Hance got this information in front of a detective, who promptly told him to [I]stay quiet[I]. At the time, the police had been in the final stages of rounding up and arresting the eight individuals from Operation Vicious Cycle, and they didn’t want Hance tipping off the thieves that their Mexican associate had been outed.

“It sucked, because I kept seeing all these victims and I kept matching their bikes,” Hance says. “So when they finally published Operation Vicious Cycle, we gave [police] a heads up saying, ‘Look, we are going to put all these bikes out there, we’re going to name names, and we’re going to basically try to blow this guy away.’”

And on December 16, that’s exactly what they did. Bike Index published its findings in an article titled “Closing the loop” and effectively exposed this vendor to the world.

“This got picked up by Mexican-cycling Twitter and Mexican-cycling Facebook and a whole lot of people started emailing us about this guy’s reputation and sending us more information that we didn’t know,” Hance says. “People think [Mexican cyclists] don’t care, that they just want cheap bikes and that’s not it at all. The actual cyclists down there are wrecking this guy even harder than we are.”

Not surprisingly, the vendor denied everything. In fact, he claimed victimhood himself, posting that he had been hoodwinked and had been sold hot bikes he didn’t know were stolen. But neither Hance, nor Colorado or Mexico’s cycling communities were buying it—Alexander’s Bikes was bombarded with angry comments and posts.

Hance admits that it’s disappointing this vendor wasn’t brought to justice. But he also points out that this accounts for a missing link in the bike theft mystery—answering the enduring question of where many of Colorado’s stolen bikes are going and how they’re being sold.

“This is at least one of the channels where they are getting rid of these bikes,” Hance says. He knows Alexander isn’t the only vendor of his ilk—he’s just one outlet in a network of stolen bicycle trafficking. Alexander’s business is closed (for now) but there will be others who step in to replace him, Hance says.

“We want to be really clear that this is about the bigger problem,” he says. “It’s not about this one fucking dude named Alexander. It’s about guys like him and the systems that allow them to propagate.”