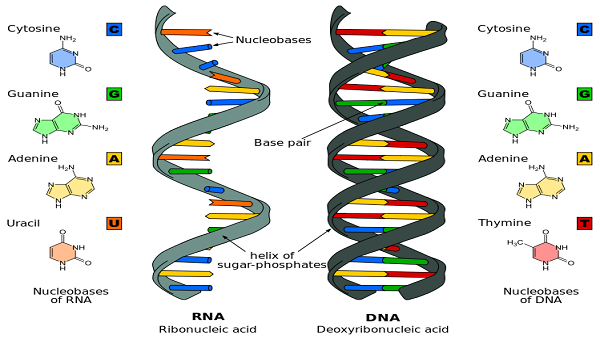 To understand RNA, you have to understand DNA, deoxyribonucleic acid, those double-sided spring-like chains of genetic information that determine the color of a human’s hair or the hue of a flower’s petals. If DNA acts as a blueprint for living things, then RNA is the construction crew. Both DNA and RNA are made up of four different types of chemicals called nucleotides.

RNA looks just like DNA, but they’re smaller, shorter and only have one side. Their diminutive size allows them to slip through pores in the nucleus where they dock with ribosomes to create proteins. Proteins assemble to form cells, which amass to form tissues, which gather form organs and eventually whole living organisms.

But the naturally occurring RNA interference process can change all of that orderly business.

Even smaller molecules of RNA — microRNA (miRNA) and small interfering RNAs (siRNA) — drive the RNAi process. These small RNAs can bind to specific messenger RNA molecules (the molecules responsible for carrying genetic codes outside the nucleus) and alter their activity, speeding it up or slowing it down.

The binding creates a double stranded RNA molecule, setting off alarms in cells.

“DNA is double stranded, but RNA is a single strand of nucleotides. If a cell sees double-stranded RNA, it’s a signal that something’s wrong — it knows it’s been invaded, like a virus is there,” says Vicki Vance, a professor of biological science at the University of South Carolina.

To combat the intruder, the cell suppresses any gene with a sequence matching that of the double-stranded RNA.

“It’s an ancient pathway in eukaryotes [organisms with complex cells]. Different living things make hundreds of these small RNAs and they control gene expression — whether or not a gene gets turned into a protein. Turns out it’s important for virtually everything in the cell,” says Vance.

Novel concepts for how to treat and even cure cancer created palpable excitement in the medical science world in 1998 when Andrew Fire and Craig C. Mello published a paper revealing the RNAi process in the nematode worm. However, it’s proven difficult to deliver RNAi drugs to humans; RNA is broken down quickly in the bloodstream and often has trouble entering cells if it does survive the bloodstream.