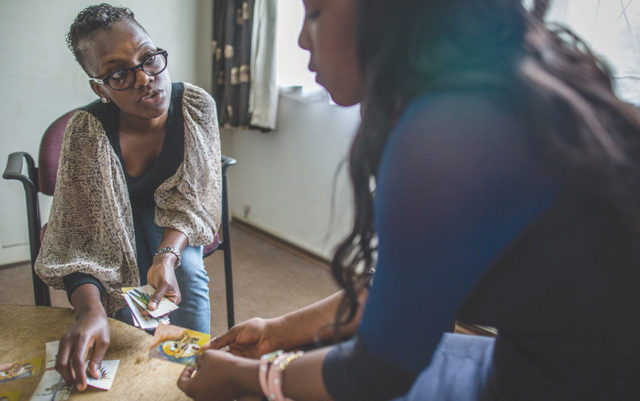 Loyce Maturu found out she was infected with both HIV and Tuberculosis (TB) in 2004 when she was just 12 years old and living in the Shamva Province in northern Zimbabwe. Two years earlier, her mother and younger brother passed away in the same week from the same diseases. Being diagnosed “was really devastating for me because at that time a lot of people were dying due to AIDS-related illnesses,” she says. “And psychologically I wasn’t well because of the stigma related to these diseases.”

It was the height of the global AIDS epidemic, with a reported 33 million people living with HIV and at least 14 million people having died from AIDS at the turn of the century. Maturu experienced both verbal abuse and ostracization from her family due to the intense stigma associated with HIV, stigma that is especially difficult for young girls, she says. Promiscuity is assumed, she says, and there are plenty of misconceptions surrounding the transmission of the disease.

There were posters around of “skeleton people” with the disease, based on the assumption that infection ultimately leads to death, she says. If people were losing weight or coughing a lot, they just looked like they had AIDS, she adds, and that lead to further stigmatization.

The stigma, “made me feel that I was not worthy living in this world,” says Maturu, who at one point attempted suicide. “Stigma is really the biggest barrier.”

But she was connected to the Africaid Zvandiri Programme, a community organization that supports young people in Zimbabwe living with HIV. Maturu was able to get counseling and treatment, completing TB medications and receiving  antiretroviral therapy for HIV, which she still takes every day. She also met other young people like her, peers facing the same stigma she was. She soon learned the treatment and support was all thanks to the Global Fund to Fight AIDS, Tuberculosis and Malaria (Global Fund), widely recognized as a successful and unique global partnership between governments, the private sector, civil society and people affected by the diseases — people like Maturu.

“I told myself that I want to share my story and the impact that the Global Fund has meant and also share the stories of my peers who are also living with HIV,” she says. “So that the world can understand how these diseases actually affect people around the world so that we can have better interventions to support adolescents and young people.”

Maturu was on a tour of the Mountain West in late May, her first time in the region, sharing her story, advocating on behalf of the Global Fund and urging lawmakers to support funding efforts in Congress.

Since its founding in 2002, the Global Fund reports having saved 27 million lives, with a 37 percent decline in TB deaths, a 60 percent decline in malaria deaths and cutting AIDS-related deaths in half since the peak in 2005. Since its inception, the organization has asked donor countries to replenish the fund every three years, the last time in 2016.

With the 6th Replenishment Conference hosted by France coming up in October, the Global Fund is asking for $14 billion in new investments, including $4.7 or so from the U.S. For the past 17 years, the U.S. has consistently pledged a third of the financing for the Global Fund. There is uncertainty this year, however, says Amanda Beals, global grassroots expansion manager at the anti-poverty campaign RESULTS based in Washington D.C, and who was traveling with Maturu. The Trump administration’s proposed budget cuts funding for global development programs by 33 percent, something he has done each year since taking office. While Congress has been restoring those cuts over the last few years, it’s the administration who has to make the replenishment commitment to the Global Fund in October.

“What we’re really asking right now is that the U.S. show that leadership going into the replenishment conference,” Beals says. “What we do determines what other countries do too. So if we step back our support, that’ll have a domino effect.”

The funding from donor governments over the next three years comes with the potential for significant results: cut the projected deaths related to the three diseases in half, prevent 234 million cases of the diseases and save some 16 million lives by 2023. Through co-financing commitments, the $14 billion also has the potential to unlock $46 billion in additional funding from the countries most affected by these epidemics. The new cycle of financing is critical, according to Maturu and Beals. There is no middle-ground, they say. The effort to combat these diseases either moves forward, as the world continues to fund prevention and treatment programs, or it regresses, allowing new infections to skyrocket and the diseases to spread.

“We need to sustain our gains that we have done over the past years and if we limit the funding,” Maturu says, “it means a lot of people are going to die because there isn’t that much access to antiretroviral therapy because we depend on the Global Fund money for us to procure the HIV, tuberculosis and malaria medication.”

As of 2017, more than half the people with HIV around the world are on antiretroviral therapy, according to the Joint United Nations Programme on HIV/AIDS (UNAIDS). It’s a huge increase over the last decade — 21.7 million people using antiretroviral therapy in 2017 compared to 8 million in 2010. TB is the leading fatal infectious disease in the world, killing roughly 4,400 people each day, according to UNAIDS. What’s more, TB accounts for one in three AIDS related deaths, making it the leading cause of death for people with HIV. Almost half of people living with both HIV and TB aren’t even aware of the coinfection, let alone receiving treatment, according to UNAIDS.

“There’s no other partnership like [the Global Fund], working on fighting these diseases. It brings all of those partners and people together to pool our resources to support governments, to put power in the hands of the people who are experiencing these diseases,” Beals says. “Taking funding away from this partnership would have devastating consequences.”

A recently published study from Georgetown University shows that countries with Global Fund financing demonstrate better governance, including more accountability when it comes to corruption and the rule of law. Investment is also linked to “improved adult mortality and overall development,” according to the research, which includes data from 112 countries over the course of 15 years. The study specifically cites the Global Fund’s structure, which not only requires cooperation from a wide variety of international, national and local participants, but also builds in high levels of transparency and accountability.

It’s not all good news, however. Global cases of malaria are on the rise, as resistance to drugs and insecticides is making it difficult to keep the diseases in check. What’s more, at the International AIDS conference in Amsterdam last July, officials from UNAIDS said reaching the goal to end the AIDS epidemic by 2030 is threatened. There were 1.8 million new HIV infections in 2017, with 50 countries seeing a rise in new infections. There are persistent challenges to prevention efforts, according to UNAIDS Executive Director Michel Sidibé, including a lack of comprehensive sexuality education, access to prevention services and the criminalization of certain behaviors for religious or cultural reasons.

“Health is a human rights imperative and we are deeply concerned about the lack of political commitment and the failure to invest in proven HIV programmes, particularly for young people and key populations,” Sidibé said in a press statement. “If countries think they can treat their way out of their epidemics, they are dangerously mistaken.”

Still, many are hopeful that international and cooperative financing from the Global Fund can continue to change the course of the fight against HIV/AIDS. Bill Gates has said, “The Global Fund is one of the best and kindest things people have ever done for one another. It is a fantastic vehicle for scaling up the treatments and preventive tools we have today — to make sure they reach the people who need them,” according to RESULTS.

Gates also recently touted the organization in the Wall Street Journal for its ability to grow and adapt its strategies to the challenges it faces. In the face of insecticide resistance, for example, the Global Fund now tracks what type of mosquitos transmit malaria and where in order to deliver nets treated with the right insecticides. While the Bill and Melinda Gates Foundation has given billions to HIV/AIDS prevention programs, Gates writes that private investment will not be enough, as the lion’s share of funding still comes from governments. If even a few of the funding countries, including the U.S., pull funding, it could lead to world-wide resurgence of the diseases, Gates says.

There has long been bipartisan support in Congress for the Global Fund. Last October, 18 senators sent Secretary of State Mike Pompeo a letter, asking the Trump administration to make an early replenishment commitment, based on the “impressive results” and “concrete progress” the fund has had in saving lives. It acknowledges the leverage the U.S. commitment has had in eliciting global health funding from other donors and countries, as well as the role of combatting these infectious diseases in national security and international trade. The letter was sent with bipartisan support, signed by senators from both sides of the aisle — Elizabeth Warren along with Lindsay Graham, Cory Booker as well as Marco Rubio. Colorado Senator Michael Bennet also signed on, although Cory Gardner did not.

Maturu, Beals and other volunteers from RESULTS met with members of Gardner’s staff while in Colorado, hoping to plead their case and encourage the senator to use his position as a member of the Senate Foreign Relations Committee and his influence in the Republican Party to push the issue.

“They seem very open to the issue,” Beals says about Gardner’s staff. “They seem to really understand why this matters here locally and in the D.C. office. The problem has been getting them to prioritize it and take the actions that they need to in order to make a difference and use that leadership.”

Gardner’s office did not respond to BW’s requests for comment.

For Maturu, financing from the Global Fund not only saved her life, she says, but is essential to the work she continues to do helping others affected by the diseases. In 2009, she returned to Africaid, this time as a peer counselor, providing support for children and young people living with HIV, which includes helping educate parents, relatives and other caregivers about treatment, as well as helping destigmatize the disease.

The lack of education about the diseases, often prevents people from receiving the necessary treatment, Maturu says. Around the turn of the century, UNAIDS negotiated with pharmaceutical companies to significantly reduce antiretroviral drug prices for developing countries. For people living with HIV, antiretroviral therapy, a combination of drugs taken every day, can reduce the amount of HIV in a person’s blood to almost undetectable amounts, allowing them to live healthy, longer lives and effectively getting rid of the risk of transmission. The Global Fund has helped countries procure these live-saving treatments, Maturu says, making it essential in the global fight against HIV/AIDS.

Along with her work in her home country, Maturu also travels the world, speaking with local communities and government officials, advocating on behalf of the Global Fund, ensuring that the people in her community and around the world living with HIV have the same access to care and support she has received.

“Now I’m working, supporting and giving back to the community the same way I was supported,” Maturu says. “My story is not the only one.”