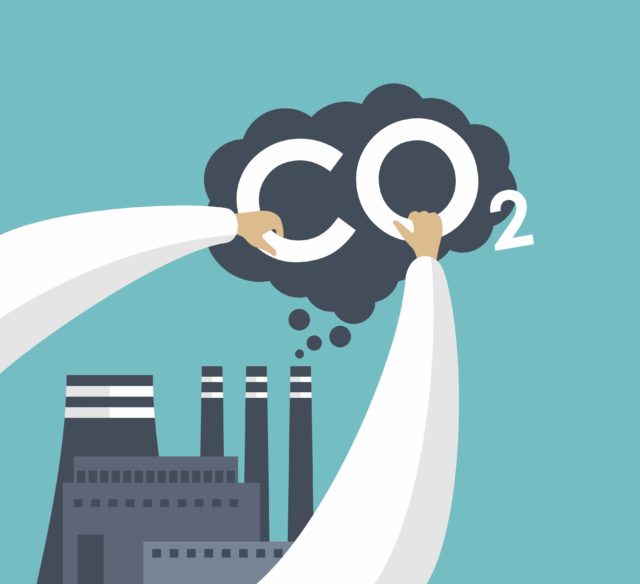 “I keep a notebook with ideas next to my bed,”  Luca, an assistant professor of chemistry at CU Boulder, says.

A little over a year ago, when Luca was teaching organic chemistry to undergraduates, she was thinking a lot about molecules that bind with carbon dioxide (CO2).

“I woke up one night and I had this idea,” she says, to electrochemically generate a molecular material that could bind with CO2 and then quantify how well those materials were binding.

After a year of experiments and computations, Luca’s idea became a study that was published in the scientific journal iScience in March 2022.

A binder is a molecule that attaches to another, in this case CO2. In this study, Luca and a group of student researchers used imidazolium-based carbenes (a specific molecule) to bind with and trap CO2 using electricity.

“What we found is that we can diagnose the strength of a binder by using simple electrochemical experiments,” Luca says.

Finding the right balance of CO2 binding strength can be a challenge—but it’s important for fine tuning a binder for specific CO2 capture conditions. Most CO2 capture technology uses strong binders to capture as much CO2 as possible, usually at point sources from industrial facilities like coal, natural gas or ethanol plants. These binders also take a high amount of energy to detach from the CO2 after capture. Weak binders make it easier to desorb after capture, but may bind with CO2 molecules less efficiently.

This study was a proof of concept that the binding strength of any electrochemically-generated CO2 binder can be quantified. It’s the first step toward improving carbon capture technologies that could help manage CO2 levels in the atmosphere.

“So, it’s the first break, I guess,’’ Aziz Alherz, a chemical engineering graduate student and co-author of the study, says. “So many more carbon capture projects to come.”

Luca is interested in studying the potential of weaker binders for direct air capture.

“Trying to understand how to do it from air that’s not been concentrated or processed in any way with pretty good yields and minimal energy consumption, that’s kind of the ultimate goal,” she says.

Josh Schaidle has worked at the National Renewable Energy Lab (NREL) for 10 years and leads its carbon management program. He talks about how critical it is that we move quickly to develop carbon management technologies and go carbon negative.

“Carbon management is a huge global issue. And it’s also something that we have to move very quickly on,” he says.

CO2 levels in the atmosphere are hovering around 420 parts per million (ppm) globally, the highest on record. Scientists predict that the U.S. could have to remove two gigatons of CO2 per year by 2050 to reach net-zero carbon emissions. As of November 2021, 19 direct air capture plants were capturing 0.01 million tons of CO2 per year globally.

Clearly, there is a lot of work that needs to be done in this space.

According to the Environmental Protection Agency, there are 27 reporting power plants and 37 reporting petroleum and natural gas systems that make up 85% of the CO2 emissions from large facilities in Colorado. In total, these 64 plants emit 34.1 million metric tons of CO2 per year.

Some of these plants could be suitable for future carbon capture projects. A few in Colorado are already exploring CO2 capture technology today: the Coyote Clean Power Plant, the Lafarge-Holcim Cement Plant, Sterling Ethanol and Yuma Ethanol.

While promising, these projects are still under development. There are no direct air capture plants as of yet.

The State of Colorado Carbon Capture Utilization and Sequestration (CCUS) Task Force was organized to better understand opportunities and challenges for carbon management technologies that could help the state reach its greenhouse gas reduction goals. The group released a set of recommendations moving forward in February 2022 and acknowledged the infancy of direct air capture technology.

Michael Turner works for the Colorado Energy Office and led the CCUS Task Force. Despite admitting that there is a lot of work to do to support developing future projects and research, Turner said that carbon capture could still help the state reach its goals.

“I’m optimistic that it could play an important role. And I think we’re at a time now where we are going to want every tool at our disposal,” Turner says.

Even with the best technology, some sectors will be difficult to decarbonize. In those areas, carbon capture could provide a solution.

Schaidle says one thing he finds interesting about Luca’s study is its potential to utilize renewable energy sources through electrochemistry to activate and regenerate a binder. This would let the process operate independent of fossil fuels and make the process more sustainable overall.

While the big picture helps provide context for Luca’s work, she is focused on developing the tools that could help someone like Schaidle take their findings to the next stage.

“We are basic scientists. We don’t make devices. We don’t really fully save the world. But I think just doing your part [is important] in this kind of global context of everything going on in the world,“ Luca says.

Science moves forward in very small increments. It is all about pushing boundaries little by little until one day you reach a breakthrough. Schaidle says that there needs to be a simultaneous effort to continue an “innovation pipeline” and deploy existing technologies.

“We need as many ideas funneling into this pipeline of concepts and technologies,” Schaidle says. “Some of them will trickle up and get opportunities to scale up and integrate. Others will just be fundamental science. But this [study] is an example of an early-stage part of this technology pipeline.”

Luca and Alherz have already submitted a follow-up study for publication.

“It’s hard to not get excited and it’s hard to kind of remove yourself from it,” Luca says, “because it’s our life. It’s what we do.”

Send comments and questions to editorial@boulderweekly.com