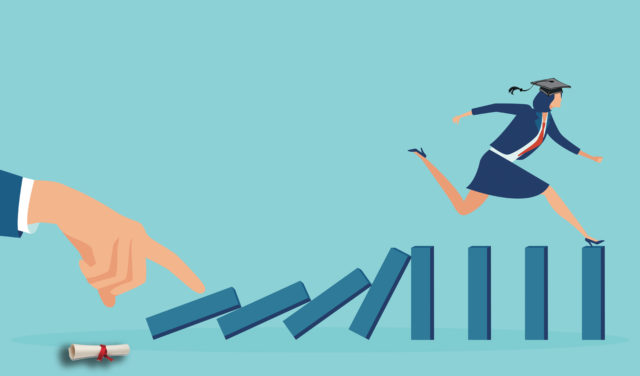 By her own account, Kristin Vietti is stubborn—for the last 13 years, she’s refused to pay the University of Colorado Boulder (CU) the thousands of dollars remaining on her balance since she left school without receiving her diploma.

“As you get older, you learn how to stand up for yourself, and when I was 27 I was an idiot. I mean, I’m an idiot now, but back then I didn’t know anything,” says Vietti, 41, who now lives outside the state. “Just dealing with the shame and trauma that’s associated… it’s taken me this long to understand that I literally did nothing wrong. I literally did nothing to deserve this.”

In September 2006, while an undergraduate, Vietti was a victim of sexual harassment by a tenured professor in the College of Engineering and Applied Science, according to an investigation report by CU’s Office of Discrimination and Harassment (ODH), provided to Boulder Weekly by Vietti.

The investigation into her case drug out over a year, and led Vietti to hire an attorney and file a restraining order against the professor—at a personal cost of nearly $5,000, according to the report. (In interviews and emails, Vietti says her legal fees topped out at nearly $10,000.) She dropped her classes in the fall 2006 semester after the professor admitted he wanted their relationship to be more than professional (during questioning by ODH, he told investigators he had “feelings” for Vietti, “the kind you don’t get rid of”). She quit a $17-an-hour job in the Electrical and Computer Engineering Department and took a lower paying position in the college to avoid him, as he was her supervisor. She eventually switched majors. Once, on her way to a test in the year after the close of the investigation, Vietti says she spotted the professor before she exited her car, soiled herself out of fear, and drove home.

“The problem with the ODH was that there wasn’t really anything that they could do,” Vietti says. “That’s really where I guess my problem with paying starts, because I had to pay to get this man to let me live my life without pooping my pants.”

Title IX prohibits sex-based discrimination in any school or education program that receives funding from the federal government, which includes a legal obligation to help survivors of sexual violence or misconduct continue their education. That means providing tutors, dorm changes, and mental health support to those who report misconduct, regardless of whether they seek disciplinary action against the offender.

In Vietti’s case, CU seems to have done everything required of an institution when there is a violation of the sexual harassment policy: University employees who were privy to the situation informed ODH before even Vietti did; the professor was notified that if he did not stop contacting Vietti, he would be in violation of CU’s sexual harassment policy; when he continued to contact Vietti, ODH launched a full investigation, provided Vietti with a victim advocate who she says “counseled me continuously,”  and referred her to the lawyer who would help her file the restraining order; and, at the subsequent hearing for the order, ODH employees working on Vietti’s case testified on her behalf.

But Vietti, like many victims of sexual harassment, struggled to find her footing after the investigation, and by 2009 she left the university.

“I dropped my classes there towards the end,” she says. “I mean, like I said, it was a nightmare. And so I just sorta washed out of school because I couldn’t… I couldn’t deal.”

She’s far from alone in her inability to cope with sexual harassment. In a 2014 op-ed for The Washington Post, civil rights attorney Alexandra Brodsky writes that one in five of the nearly 10 million women enrolled in college—as well as a number of their male classmates—will be sexually assaulted during their academic careers. (Current research by Brookings and the National Center for Education Statistics [NCES] confirms these numbers are still valid.)

“Let’s conservatively estimate that only one in 50 campus survivors loses one semester of tuition,” which, in 2011-12, cost an average of $5,150, Brodsky writes. “That puts a rough estimation of the cost of sexual violence to the students of a single national graduating class at nearly $2 billion.”

Boulder’s Hutchinson Black and Cook (HBC) law firm has become a nationally known name in Title IX legislation, having represented a number of sexual assault victims in high-profile cases in Florida, Oregon, and at home in Boulder. HBC attorney John Clune says that while Title IX doesn’t explicitly require schools to refund money to students who drop classes or take time off after sexual misconduct, “common sense would suggest that they should.”

“In a situation like [Vietti’s], if I represented the client, I’d be looking at whether or not, contractually, they (CU) owe her that money back because she’s getting harassed by one of their own professors; it’s one of their own professors that has chased her, essentially, out of her education that semester. There should be some sort of contractual obligation, implied contract, that she didn’t get the benefit of the money that was billed, so she shouldn’t have to pay it.”

But Vietti didn’t seek legal counsel beyond the restraining order she filed, and today she’s past the statute of limitations. In 2007, she just wanted to move on with her life. In the report filed by CU, Vietti—referred to as Complantaint—told investigators “that what she really wanted was for Respondent,” the professor, “to stop calling her and stop trying to contact her.

“Complantaint said that she does not want to ruin Respondent’s life, but what he did continues to cause problems for her, such as putting her through the effort of having to go to court to protect herself and having to hire an attorney.”

“They were embroiled in a federal lawsuit with my law firm over (sexual misconduct from members of) the football program, and CU has made significant, significant strides—massive—since then,” Clune says. “I don’t know that they would be in this situation again. Their findings are pretty serious in this case. The behavior of the professor was absolutely outrageous. And they found that—they found that [his behavior] created this hostile environment. Her leaving [was] not something that they were willing to excuse from a financial standpoint, even though today anyone at CU would say, ‘That’s perfectly understandable, and we’re going to try to support the student.’”

Since Vietti’s time at CU, the university has replaced the Office of Discrimination and Harassment with the Office of Institutional Equity and Compliance (OIEC) in addressing sexual misconduct. OIEC, Sorensen explains, works with the Office of Victim Assistance, “which provides confidential support and advocacy for complainants in addition to OIEC’s support measures and case resolution processes.”

In 2016, OIEC added the Support & Safety Measures branch to provide resources to people who have experienced abuse or other prohibited behavior. “These resources can range from supporting retroactive withdrawals, tuition reimbursement, class switches, changes in housing accommodations and other services,” Sorensen wrote.

“Nationally, institutions of higher education, including CU Boulder, have evolved the approach to addressing sexual misconduct over time, including implementations of Title IX changes,” Sorensen says of Title’s IX’s evolution in the university culture over the last 15 years. “Some of those changes” at CU, he writes, “include findings by a neutral hearing officer separate from university investigators and providing cost-free advisors for both parties involved in live cross-examination.”

“Our community should know that we take allegations of sexual misconduct, such as harassment or assault, seriously, and those found responsible are held accountable,” Sorensen wrote.

“The psychological and physiological impact of sexual harassment is very similar to other forms of sexual assault,” she says, with physical and psychological symptoms, including guilt and shame.

Which Vietti can attest to. After all these years, she still grapples with how much the harassment upended her life.

“If somebody’s saying, ‘I’m listening,’ [maybe my story] sounds absolutely fucking ridiculous, because the man didn’t rape me,” Vietti says. “He almost did quote-unquote ‘nothing.’ I feel like I got off really easy, and I know that I’m not the worst case scenario. And I say that with a lot of bitterness because this was not easy. I’ve only pooped my pants once in my life. For me to walk in as a student, [as] an employee of the university, and be told, ‘You know what? We’ve got this guy’s back, so you need to find your own team to be on,’ I dealt with that. And did it for my own safety, based on the recommendations of the people that I was referred to by that department.”

Vietti says she owes CU $6,000. “Not paying this money is only hurting me,” she says. She’s planning to start school (not CU) again soon, and knows she’ll need to pay her fees in order to get her transcripts.

“Respondent said that seeing Complantaint in court and her actions there sent a clear message to him,” the investigators wrote in the report on Vietti’s case. “Respondent described Complantaint as a ‘troubled girl’ and said he feels sorry for her.”

He still works at CU today.

Anyone who would like to share information or discuss addressing sexual misconduct on the University of Boulder campus can contact the Office of Institutional Equity and Compliance at 303-492-2127 or cureport@colorado.edu. OIEC asks anyone with information on a crime to report it to the police. University community members seeking free and confidential support, trauma-informed counseling, and victim advocacy can reach out to the Office of Victim Assistance at 303-492-8855 or assist@colorado.edu.