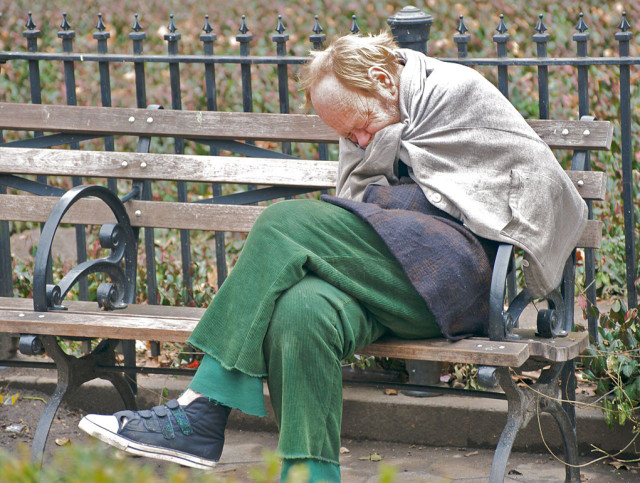 The first report, released in early February by the University of Denver’s Sturm College of Law Homeless Advocacy Policy Project, shows that between 2010 and 2014, Boulder issued a total of 3,099 citations under eight different anti-homeless ordinances, with 1,767 for the camping ban alone, or more than all other cities in Colorado combined. In Boulder, 87 percent of camping ban citations were given to people experiencing homelessness. The report estimates that over the four-year span, Boulder spent $950,000 on enforcing its camping ban.

The second report, compiled by Boulder’s municipal court in response to specific questions from Boulder City Council members Sam Weaver and Andrew Shoemaker, reveals that between 2009 and 2015, 85 percent of these citations were given in cases where the only offense was violating the camping ban. Furthermore, 59 percent of camping ban citations resulted in a failure-to-appear warrant for arrest, 45 percent of which ended in jail time.

“It seems like a waste of time, expertise and dollars to basically run these folks through the criminal justice system when the net result is that they are probably going to be directed to services anyhow,” says Bill Cohen, a lawyer who recently started the nonprofit Boulder Law Center for the Unhoused and a member of Boulder Rights Watch. Boulder Rights Watch has also argued that Boulder’s smoking ban has been disproportionately enforced against the homeless population, although neither of the recent reports specifically address or analyse data regarding the smoking ban.

Weaver says the City’s report revealed that the claims of homeless advocates regarding the camping ban are accurate, although he still disputes the dollar amount associated with it. And although the statistics are concerning, he thinks the path forward isn’t repealing the camping ban but rather enforcing it differently where citations that result in jail time aren’t the first approach.

“We got to the point we are now, with the way the ordinance is configured, through a community process. So we heard from the homeless advocates and the homeless themselves as well as the downtown business community and other members of community about what kind of trade off we want [in] the use of our public space. Do we want any restrictions on it? If so what do those look like? And I think that’s where we ended up, is that in civic spaces and public spaces we don’t want people camping out there.” Weaver says. “Our community has made some decisions around these subjects, and now it’s about how we enforce and how we keep our own process moving forward.”

Weaver says this community process took place around the Occupy movement in 2011 and ’12. However, there appears to be evidence that contradicts Weaver’s assumption that the community supports the City’s actions against the homeless.

In 2015 when the City of Boulder lobbied against the state-wide Right to Rest Act, which failed to pass and would make the camping ban illegal, the public was not supportive. So much so, City Council remained neutral on the 2016 version of the bill, which again failed to pass but by a smaller margin.

“We heard that it wasn’t popular that we lobbied on behalf of that bill so we tried to adopt a more neutral stance,” says Weaver, who is also on Boulder’s legislative committee. Without a vote, the community consensus surrounding the camping ban remains unclear, despite Council’s continued claims that they are acting in accordance with the community’s desires.

“Anecdotes are not data but we do know that it does happen from time to time,” he says. Although he insists such perceptions should not be used to stereotype.

However, the ACLU of Colorado has demonstrated, through a court case in Grand Junction, that such fears are often not based on concrete data. In the Grand Junction example, the town was attempting to implement an ordinance against aggressive panhandling, stating that people were getting aggressive and even violent while asking for money. But when asked to provide evidence through police reports, the Western Slope town could not demonstrate its accusation was true. In fact, most research shows that people experiencing homelessness are more often than not the victims of crime and not the perpetrators and any violence typically occurs within the homeless community.

“Research evidence is likely to show [aggressive or violent behavior of homeless people towards the community] is an unwarranted fear,” says Mark Silverstein, legal director for the Colorado ACLU. “Laws should not be based on groundless fears.”

Regardless, it doesn’t look like Boulder’s camping ban is going away anytime soon, according to Weaver.

“Ultimately, it would be great to get rid of the camping ban because we don’t need it,” Weaver says. “But to get there we’re going to have to add to the spectrum of services, and in the meantime it’s not fair to ask the community to sacrifice all of its public lands to this issue.”

With the upcoming Boulder City Council trip to Oregon, Weaver says Boulder could get ideas from what Portland and Eugene are doing to address homelessness. The trip has drawn some controversy because the council members are going in conjunction with business owners and using City dollars to pay for their expenses.

But a quick search of the City of Portland’s website reveals both the history and practices of the city as it seeks to manage a large homeless population. While Portland did enact anti-camping and sit-lie ordinances in the early 2000s, a District Judge ruled such ordinances go against the state’s constitution in 2009. Since then, the city has enacted a slew of programs and ordinances to address the issue and most recently declared a state of emergency on housing and homelessness, which allows the City to expedite the zoning and permit process for building new shelters and affordable housing.

The overarching Portland policy on homelessness depends on city officials being able to finish the sentence, “You can’t stay here, but you can sleep…” according to its website. This mentality has resulted in “safe sleep options” for the homeless community, which allow the use of sleeping bags and tarps on sidewalks as long as it doesn’t obstruct pedestrian traffic, the use of tents between the hours of 9 p.m. and 7 a.m. and organized, city-sanctioned camping, as well as car and RV camping.

“We’re not being creative,” Cohen says, referring to Boulder. “That’s what we need from Council is a willingness to say, ‘You know, we’ve got a problem, let’s be creative. We’ve got lots of proposals on our plate, let’s try some of them,’ instead of locking people up over this silly ordinance.”

And Boulder’s camping ban may be affecting more homeless people than just those in Boulder. The Colorado ACLU is engaged in advocacy campaigns around the state dealing with the criminalization of homelessness and John Krieger, director of communications and outreach, says other jurisdictions often site Boulder’s record as justification for their own practices.

“Since Boulder is a progressive community, or there’s a real progressive constituency in Boulder, when they come short of that on things like criminalization of homelessness then other cities look and say, ‘Well, look at Boulder, we’re not nearly as bad as Boulder or we’re not cracking down as hard as Boulder,’” he says. “It gives cover to other cities and that’s a real problem. Whereas the opposite could also be true, if Boulder repealed their camping ban and came up with a new housing solution.”

“Some cities don’t have a camping ban but a lot of those end up kind of de facto having a camping ban by enforcing trespassing ordinances and so on,” Weaver says. “And I think we’ve just chosen to be forthright about exactly what it is we are doing, which is restricting a behavior which is practiced disproportionately by the homeless. This is a little different than criminalizing homelessness.”

Nevertheless, Weaver sees ways the enforcement of the camping ban could improve in Boulder as to not result in so many citations, failure to appear warrants or jail time. Currently, the policies of enforcing the camping ban rely on officer discretion but could be made more uniform. Weaver also says he’s working on a new initiative with both the police department and the municipal court that could be a possible solution to the issue raised by the reports, although he is unwilling to discuss details at this time. He plans to release details before the City Council revisits the camping ban ordinance at a meeting in early April.

The ACLU’s Silverstein says that in the end, Boulder’s camping ban, as evidenced by the data in both reports, is making criminals out of people experiencing homelessness by using the criminal justice system to punish necessary conduct for survival. “Boulder and other cities need to put more resources into addressing the causes of poverty and homelessness,” he says. “And they must stop relying on criminal laws and police as the way to address behaviors that are closely tied to homelessness and extreme poverty.”