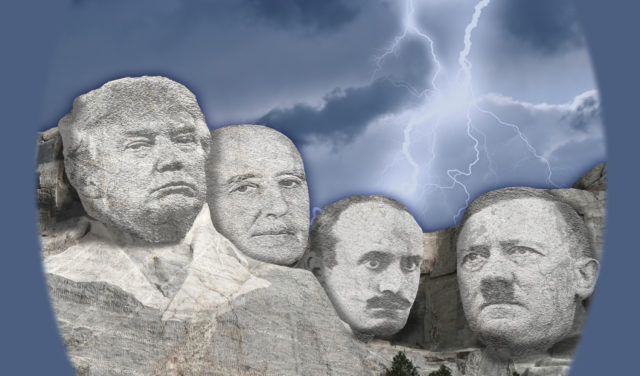 It is quite disturbing that the presidential nominee of a major political party would retweet messages from a user with the handle @WhiteGenocideTM, whose profile picture is of George Lincoln Rockwell, the founder of the American Nazi Party. But that is what Donald Trump has done. He frequently retweets supportive messages from racist or “white nationalist” Twitter accounts to his nine million followers.

We now understand that Trump’s racially and religiously bigoted remarks aren’t little accidents, but reflect his character. Journalists have also exposed his friendly relations with the “Alt-Right” on-line subculture which the Southern Poverty Law Center defines as “…groups and individuals whose core belief is that ‘white identity’ is under attack by multicultural forces using ‘political correctness’ and ‘social justice’ to undermine white people and ‘their’ civilization.”

This is a time of instability and anxiety. Traditional institutions and leadership are being rejected. Many are looking for “anti-establishment” solutions. Scot Nakagawa and Tarso Luis Ramos of Political Research Associates, say that the Right evokes images of the founding fathers and the American Dream but push “radically repressive, exclusionary, anti-democratic, and authoritarian agendas.” They argue that the right-wing may be better positioned than the Left to capitalize on this “anti-establishment” moment amongst white people. The Left doesn’t have the institutional infrastructure and concentrated power it had prior to Ronald Reagan’s presidency.

They note that: “the Right’s immediate projected base — economically insecure, socially conservative whites — are simultaneously feeling the pinch of racial demographic change, which many view as a threat to the meaning of ‘American,’ and bearing witness to the collapse of the middle class. The Right has popularized the idea that there’s a cause-and-effect relationship between the two. The resulting rising tide of fear and rage among many whites is lifting the hopes of white nationalist groups, some of which have ‘by any means necessary’ approaches to political struggle.”

This has been a long time coming. In 1994, James William Gibson published a book called Warrior Dreams: Violence and Manhood in Post-Vietnam America. He argued that there was a crisis of masculinity for many men due to the American defeat in Vietnam as well as feminists’ and racial minorities’ challenge to the social status quo. He said there was a new paramilitary culture epitomized by Rambo movies, the Matt Bolen Executioner series, combat games like paintball and combat shooting schools, the tales of mercenaries in Boulder’s Soldier of Fortune magazine, far-right racist terrorists and the proliferation of lone-wolf mass killers.

That year, 1994, I heard of a “patriot” movement and its armed wing, the “citizen militias.” Professional watchers of the Right had an argument about whether the movement was merely a front for white supremacists or something more independent. All over the country, men dressed in camouflage wandered in the woods, underwent automatic weapons training and prepared to battle the enemy, which was not just communism any longer but the U.S. federal government too. The movement was decentralized, but the Militia of Montana (or MOM) served as an organizational model for others. MOM had an “Information and Networking Manual” which said “Join the Army and serve the UN or Join the Militia and Serve America…Your Choice: Freedom or Slavery.”

The movement had clout in the Republican Party in the West. Colorado state Senator Charlie Duke of Monument became a national hero for the patriots. He said taxes were a form of slavery and he got a 10th Amendment State Sovereignty Resolution passed in the legislature. Rightwingers interpret the 10th Amendment to mean that all major federal legislation (civil rights, environmental, gun control, Social Security and Medicare) are violations of the “rights” of states.

A radio station in the little town of Johnstown (near Greeley) was a national voice for the movement by way of satellite and shortwave technology. It claimed an audience of three million listeners in 81 countries. Locally, it is at KHNC 1360 AM.

Talk show host Norm Resnick once told his listeners when Bill Clinton was president that Hillary was the real president and that the White House was overrun by “lesbians, sex perverts, child-molesters, Christian-haters and the most doctrinaire of communists.” He said then Attorney General Janet Reno was “a hardened lesbian and oddball radical who owns 35 pet peacocks, all named Horace.”

Once Resnick interviewed a couple who claimed that multigenerational Satanists were in prominent positions throughout society. They even go to church pot-luck suppers and take along “human-flesh casseroles.” Resnick interrupted them and solemnly told his audience that he believed every word of this.

In April 1995, the movement developed a serious public relations problem when Timothy McVeigh, an antigovernment adherant who had been associated with militias, bombed the federal building in Oklahoma City. The explosion killed 167 people (including 19 children in an onsite day care center), and injured over 650 more. One rescue worker died. It wasn’t long before the far rightists claimed the federal government really did it.

As a journalist, I covered the movement. In November 1996, I attended the travelling “Preparedness Expo” which was a survivalist/militia trade show. It claimed to promote “peace of mind in our changing world” through “self-reliant living” and “emergency preparedness.” The Denver Coliseum hosted the event, which featured 125 booths advertising sprout cultivation, homeopathic remedies, gas masks, blow guns, bee pollen tablets, home schooling supplies, radiation exposure kits, survival gear and freeze-dried food. This consumer show was supposed to prepare you for economic instability, natural disasters, political unrest and nuclear war as well as threats to your health and personal freedoms.

You could also buy numerous buttons, t-shirts and bumper stickers denouncing or ridiculing Bill and Hillary Clinton. There were bumper stickers, which said “Mark Fuhrman for President” and “The Miracle of AIDS — Turns Fruits Into Vegetables” and “Gays, Liberals, Antigunners — Use Them for Crash Dummies.”
You could get a T-shirt that simply declared “Christian American Heterosexual Pro-Gun Conservative — Any Questions?” or you could be more belligerent with a T-shirt which said “Some People Are Alive Simply Because It’s Illegal to Kill Them.” If you hated U.S. Attorney General Janet Reno, you could purchase a T-shirt with a cartoon of Reno as a bulldog named “Butch” urinating on a “Liberty Tree.”

The Militia of Montana had a booth. MOM leader John Trochmann presented a slide show on “Enemies Foreign and Domestic” on Saturday afternoon. He displayed photos of what he claimed were foreign United Nations troops and military vehicles which have been mysteriously proliferating in isolated rural locations throughout the United States over the last few years. He recommended that his listeners read a tabloid newspaper called The Spotlight, which had a booth and has promoted the wild stories about strange military maneuvers. The paper was published by the now defunct Liberty Lobby, a group which claimed to be “nationalist” and “populist” but was a thinly disguised neo-Nazi outfit.

Then Trochmann suddenly flashed a picture of a Lenin statue. He paused and cryptically said that the monument had just been erected in Seattle. He urged his audience to “bury your weapons, bury your food.” He also noted that lead-based paint was banned at the same time as the first satellite went into orbit. “…You can’t see through lead,” he sort of explained.

This raised some questions. Had the commies taken over Seattle when we weren’t looking? Was lead-based paint banned because the federal government spooks wanted to spy on all of us with their satellites?

I later did some research and found out that there is really a statue of Lenin in a Seattle park. It is a 16-foot and seven ton bronze Lenin striding boldly and backed by flames and firearms. An American teacher in Czechoslovakia (now Slovakia) found it in a scrapyard. He thought it was a work of art worth preserving.
It was easy to laugh at the absurd notions of the far right back then, but there was also a very ominous side.

The Colorado Civil Rights Division warned against “notable anti-government extremists and white supremacists” appearing at the expo. When he first became a public figure, John Trochmann admitted to some reporters that he was an adherent of Christian Identity, a North American theological movement, which believes that white northern Europeans are the true “Israelites,” that Jews are satanic imposters and that people of color are an inferior species of soulless animals known as mudpeople. Then he denied saying this. He admitted that he’d visited the neo-Nazi Aryan Nations compound a couple of times. “Once it was for a bagpipe festival. I love bagpipes,” he said. This provoked Richard Butler, the head of the Aryan Nations, to call Trochmann an “anti-Christ.” Butler said Trochmann came over many times.

Two other prominent speakers at Denver’s expo, “Bo” Gritz and Jack McLamb, also had a tendency to cover up their involvement with white supremacists, neo-Nazis and the Christian Identity movement.

A former Green Beret commander in Vietnam, Gritz was a national radio talk show host and one of the most influential figures in the patriot/militia movement. He gave a speech entitled “Are We in The Biblical End Times?” He had a paramilitary training program called SPIKE — Specially Prepared Individuals for Key Events. He instructed his fellow patriots in rappelling, small arms combat, first aid, lock picking, food storage, weapons caching and other “survivalist” skills. Yeah, lock picking.

Jack McLamb was a former Phoenix, Arizona, police officer who was recruiting cops into the patriot/militia movement. He claimed that the 1992 Los Angeles riots were orchestrated by the Federal Emergency Management Agency (FEMA)to “test American reactions to the imposition of martial law.”

Looking back at the antigovernment movement of the 1990s makes it easier to understand the Alt-Right-driven Trump wing of the Republican Party.

KHNC Radio is still broadcasting. Today, the station carries the Alex Jones show. Last year, Jones said the feds were invading Texas. He said that a military training exercise in Texas called “Jade Helm 15” was part of a coup by Obama who planned to stay in office beyond 2017.

Jones has claimed that the September 11 terrorist attacks, the Oklahoma City bombing and the Boston Marathon bombing were “false flag” intelligence operations of the federal government. So was the Sandy Hook elementary school massacre he claims, saying that there wasn’t even a massacre but rather a hoax with child actors.

Jones and Donald Trump lavish praise on each other. Trump said to him, “Your reputation is amazing. I will not let you down.” Recently, Jones said, “It is surreal to talk about issues here on air and then word-for-word hear Trump say it two days later.”
Yes, it is surreal. And as history has shown, very dangerous as well.