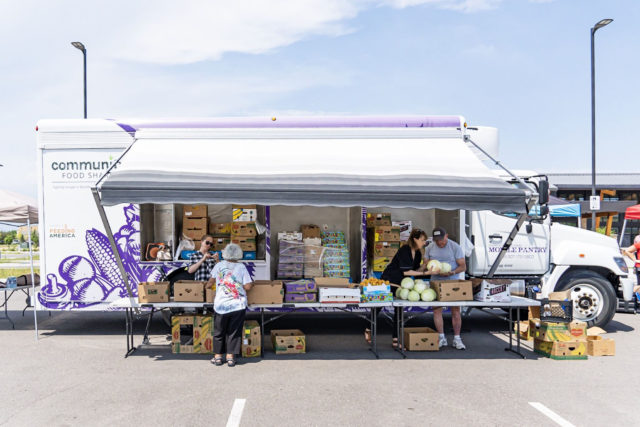 Tariffs on U.S. goods have skyrocketed in the past year as the Trump administration has engaged in an escalating trade war with China. According to the BBC, more than $110 billion of U.S. products are being hit with Chinese tariffs, ranging anywhere from 5-25%. While U.S. producers and consumers alike are made to adjust, there has been an unlikely beneficiary: U.S. food banks, including those in Boulder County.

A trade mitigation program through the USDA is buying U.S.-produced food that would normally be sold to China and distributing it to people in need through The Emergency Family Assistance Program (TEFAP).

“We’ve seen a pretty significant increase in the amount of food that we’re getting through the distribution,” says Stephanie Gausch, chief development officer at Weld Food Bank, which distributes TEFAP food throughout Weld, Larimer, Boulder and Broomfield counties. Compared to last fiscal year, there has been an increase of about 1.5 million pounds of food coming through Weld Food Bank as part of the TEFAP program, she says. Statewide, Colorado has received about 12.8 million pounds of additional food.

“The big thing that’s pretty significantly different is the quantity and quality of fresh produce,” says Kathy Underhill, food distribution programs manager at the Colorado Department of Human Services, which receives the trade mitigation food from USDA and distributes it throughout the state. Apples, oranges, blueberries, grapes, tomatoes and fresh dairy are just some of the items being distributed. Plus, there is quite a lot of protein: some meat, but mostly a variety of beans and nuts — lentils, garbanzo beans, split peas, even large bags of pistachios.

With the increase in food, USDA has provided some additional administrative funding and for the most part, food banks and partner agencies aren’t having trouble distributing all the food. Likewise, they aren’t producing more waste.

“We have had to be more creative, or more efficient I guess, with our storage, but certainly we’ve been able to handle the increase, and we’re thankful for the increase,” Gausch says. “Anytime we can bring in additional food and give it to additional people, that certainly helps with community.”

“An increase in the supply of food that we can offer our program participants and our partner agencies is always a good thing,” McGee says. “A challenge we face in distributing trade mitigation foods relates to the fact that TEFAP foods don’t meet the needs of all the people we serve; they are only available to people whose income is at twice the poverty level, or lower.”

States receive food from USDA based on the unemployment rate, population living below the federal poverty line ($25,750 for a family of four) and the SNAP caseload, Underhill says. But then each state sets income eligibility requirements independently, and in Colorado a family of four can’t make more than $50,196 to receive TEFAP benefits. While that might work for people living in some areas of the state, McGee says, the cost of living is much higher in Boulder County. According to the Colorado Law and Poverty Center’s state self-sufficiency standard, a family of four (two adults, two school-aged children) living in Boulder County needs to make an annual income of about $81,267 to meet basic needs without assistance.

“Part of that larger issue is that there’s a huge difference between the poverty level and the level of self-sufficiency in every community, what it actually takes to support your family and pay all your bills without relying on any sort of program,” Gausch says. “Unfortunately there’s a lot of folks in that gap that aren’t able to access this TEFAP food but are still in need.”

Which is where the food banks’ and partner agencies’ other programs come in. Last year, Weld Food Bank distributed 13.6 million pounds of food, most of it donated or purchased to meet the needs of the community.

Still, for the roughly 13,000 people in Boulder County that do access TEFAP products, the trade mitigation increase in both quality and quantity is making a difference. They can receive more produce and product of a wider variety, as Community Food Share has removed all limits in order to distribute the influx of trade mitigation foods.

“We had to have limits prior to manage our inventory and ensure equitable distribution quantities for every participant that accesses TEFAP through our pantry,” McGee says. “Now families are able to choose what they need for their family size.”

In its announcement of the program last September, USDA said it expected to spend $1.2 billion on U.S.-produced food “unfairly targeted by unjustified retaliation” to distribute through TEFAP in 2019. And the program is expected to last at least another year, Underhill says. So while the trade war with China is still playing out with no end in sight, it looks like it will be helpful for people who access TEFAP.

As Underhill says, “I think that any fresh, healthy, high quality food in the hands of Coloradans that are struggling is a positive thing.”