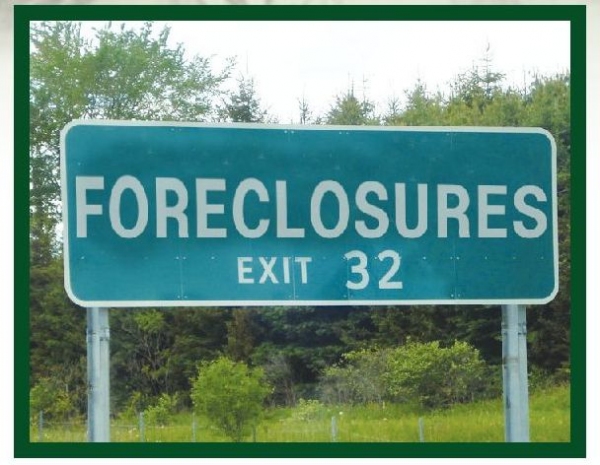 Another Crestone resident, Wooddora Eisenhauer, says that she, like her neighbor Bruce McDonald, has been victimized by banks’ predatory foreclosure practices.

Eisenhauer, who was in the real estate business for more than 16 years as a broker and owner, says she has seen firsthand how corrupt the foreclosure business is. Beginning at the end of 2006, she says, she had a growing number of second-home owners grappling with whether they should foreclose or declare bankruptcy, and the rise of foreclosures forced her to shutter her own real estate business at the end of 2009.

“I’m one of the ones that lost the game,” she says. “The mortgage and banking industry is so corrupt, and has specifically, strategically and systematically been put into place by laws that keep the individual from having any control over the powers that be.”

Eisenhauer, who has had two of her own personal properties foreclosed on and is in the middle of her third, says the system is rigged.

“The legalities of them being able to foreclose are totally tainted,” she says.

“The courts look at banks as being those who render the truth and get the benefit of the doubt.”

The first of her foreclosures was done appropriately by a small, local bank, Eisenhauer says.

But her second property was foreclosed on by a big national bank, which “supposedly” had bought it from Countrywide, she says. “Any time a note changes from one bank to another, I’m going to be suspicious.”

The third and current foreclosure involves her primary residence, a 650-square-foot, one-bedroom, one-bath home that Wells Fargo is attempting to foreclose on after buying the loan from Washington Mutual, Eisenhauer says. At her March 1 Rule 120 hearing, the administrative procedure held to determine whether a house can be foreclosed on and sold, she claims that Wells Fargo “showed up with a forged document.”

She
and her attorney, Erich Schwiesow of the law firm Lester, Sigmond,
Rooney and Schwiesow in Alamosa, argue that the first page of the
promissory note clearly did not match the rest of the document, in part
because it didn’t have the same fax stamp. In addition, they claim, the
initials and signature on the document do not match Eisenhauer’s
handwriting.

“It
was clear it was manufactured,” Schwiesow says, adding that a local
judge agreed and denied authorizing the sale of the property. Wells
Fargo initially filed a motion asking the judge to reconsider the
decision, but dropped that motion this week.

“I will do everything humanly possible to stop this foreclosure process on my primary home,” Eisenhauer says.

Like Bruce McDonald, Eisenhauer argues that banks have a financial incentive to foreclose.

“They
don’t give a shit. They pile on penalties and fees, sell it at a
discount to Fannie May for $10, and they go to the FDIC and get [80
percent] for what their claimed losses are. I’m saying, by God, give that to me. I’m livid. I’m mad as hell, and I’m not taking it anymore.”

Eisenhauer,
70, claims that the whole mortgage/ foreclosure system was put into
place over time, creatively, to undermine the majority of the public.

“If
we haven’t felt like slaves already, we are going to find out what true
slavery is,” she says. “Don’t ask what your government can do for you,
ask what you can do to stop your government from doing this to you. …
The banks have been operating as if none of the rules apply to them.”

Eisenhauer
says that despite the unsettled status of her foreclosure, Wells Fargo
sent people to her home to change her locks and mow her lawn, even
though she doesn’t have a lawn.

“The bank doesn’t own the property yet,” she points out. “Something is desperately wrong about this.”

Tom Goyda, vice president for communications for Wells Fargo, acknowledged that the bank has agreed
to file supplemental affidavits for about 55,000 foreclosure cases
nationally in which “appropriate procedures weren’t followed.” But he
told Boulder Weekly that all of those cases are in 23 “judicial” states,
not Colorado (which, as a “nonjudicial” state, has the administrative
Rule 120 hearing to approve foreclosures).

Goyda
also acknowledges that, in the case of Eisenhauer’s property, Wells
Fargo did send an inspector to “maintain and secure” the property, as it
does with all of its properties where payments are more than 60 days
past due, but when the inspector learned that the residence was still
occupied, he and the bank backed off.

He
denied claims that such efforts are a tactic intended to intimidate a
homeowner into abandoning the property and any efforts to challenge the
foreclosure, as has been alleged by some (see www.illegalforeclosures.com, a site that claims the foreclosure rate in Colorado is double the national average).

Goyda
says banks like Wells Fargo must step in to maintain and secure
properties to ensure that vacated homes aren’t vandalized or left in
disarray, devaluing its property value and those of adjacent homes.

“Nobody
in the neighborhood wants vacant property with an overgrown lawn, or
people breaking in and taking copper, or whatever they might do,” Goyda
told Boulder Weekly.

He says he is not aware of the details
surrounding Eisenhauer’s claims of forged documents, and knows of no
cases in Colorado where Wells Fargo did not follow procedures.

When
asked about the sister case in Crestone, the Bruce McDonald lawsuit
(see story above), Eisenhauer attorney Schwiesow says similar illegal
foreclosures are probably going on all over the state.

“It’s just that Bruce McDonald is not rolling over for them,” he says.