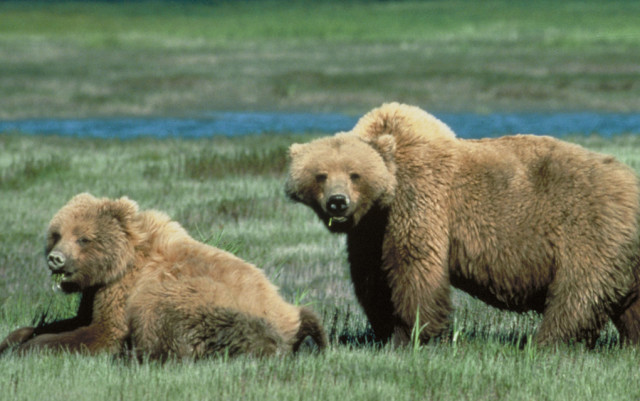 The U.S. Fish and Wildlife Service (USFWS) announced last week they will move forward with a proposal to delist grizzly bears in the Greater Yellowstone Ecosystem from the Endangered Species Act. The decision figures to undo decades-old protection of grizzly bears in the region, and opens the door for prize hunting outside of Yellowstone and Grand Teton National Park limits.

Despite the USFWS claim that the move is because the grizzly population is now sustainable and unthreatened, environmentalists, like Andrea Santarsiere of the Center for Biological Diversity, say it opens the door for premature hunting of the Yellowstone grizzly population.

“All three states said they would hold trophy hunts so I don’t have any confidence they’re going to have strict anti-hunting laws,” Santarsiere says. “Once [the proposal] is finalized, I think we’ll see trophy hunts in Wyoming, Idaho and Montana outside of the park.”

The USFWS proposal will likely be finalized by the end of 2016 or early 2017. Until then, current protections on grizzly bears will stay in place.

The move to delist the Yellowstone grizzly has been in the works for the past several years. Citing statistics showing the grizzly bear population has increased from 136 bears in 1975 to 700 or more today, the USFWS has hailed the recovery of the population as one of “America’s great conservation successes.” Grizzly bears now occupy 22,500 square miles of the Yellowstone ecosystem, according to USFWS, though Santarsiere and others claim this only represents about 4 percent of the historic grizzly habitat in the continental U.S.

As part of the delisting process, USFWS said it will put in place regulations to ensure that grizzly health and populations are not put in danger. The Service “will continue to be part of a strong monitoring program, implementation of the conservation strategy and partnership with our state and federal partners,” USFWS Director Dan Ashe said in a statement.

Yellowstone-area grizzly management, as is the case with bison in the area, is heavily influenced by the agri-business in surrounding states. Farmers in Montana, Wyoming and Idaho fear transmission of brucellosis from bison to livestock, and Santarsiere says farmers — and their state representatives — have similar livestock-purging fears about grizzlies.

“I think there was a lot of pressure on them from the states. Generally, states don’t like the federal government managing their wildlife,” Santarsiere says. “Wyoming, Montana and Idaho especially like to manage their own wildlife, especially when it comes to carnivores that are sometimes engaged in conflict with livestock, of which there are a lot in Wyoming and Idaho especially.”

The Montana Livestock Loss Board reported farmers losing 64 cattle, 32 goats and one horse in 2015 via grizzly attack. Those figures are up from the reported 36 attacks from grizzlies in 2014, and six in 2013. Montana’s statistics on livestock kill also indicate an increase in wolf attacks, but it’s worth pointing out that before 2013 (when the USFWS first announced it would seek to delist the grizzly), no animals were identified as the cause of livestock death, and data has been much more abundant in the two years since.

The total number of livestock deaths caused by all carnivores in the region, which include grizzlies, black bears, wolves, coyotes, mountain lions and more, represents a very small percentage of the area’s livestock causes of death.

However, like the bison, the grizzly is often a scapegoat in the region when something goes wrong for ranchers. As an example of such scapegoating, the environmental advocacy group Buffalo Field Campaign says there has “never been a documented case of a wild buffalo transmitting brucellosis to livestock.” Yet, Yellowstone bison are rounded up and slaghtered every year to prevent this fictional spread of disease from occurring.

Such assumptions about wildlife/ranching conflicts doesn’t bode well for the grizzly now that the ag-influenced states are poised to get major control over how the species is managed.

Santarsiere says there should be a cap put on how low the grizzly population can get if and when hunting opens up in the relevant states. That cap figures to allow hunting until the population sinks to around 600-650 bears. But that limit doesn’t apply to grizzlies that live outside what’s called the demographic monitoring area (DMA), which encompasses Yellowstone and Grand Teton National Parks and some other “arbitrary areas.”

Grizzlies that live outside the DMA will likely be fair game for hunters, which could cause major grizzly population concerns continentally, Santarsiere says.

“I’m not sure there will be any cap outside the DMA,” she says, “which is problematic because the bears outside the DMA are arguably the most important because they’re most likely to connect with other populations. The Yellowstone bears are isolated from the other bears in the lower 48.”

Because Yellowstone grizzlies are isolated from other populations, there is an increased risk of inbreeding within the population, causing major health concerns. By increasing grizzly populations in Yellowstone, as well as in other regions on the continent, the bears can safely breed and maintain the growth that the population has seen in recent decades.

Given that limiting the population of Yellowstone grizzlies, and opening up hunting on grizzlies in corridors where different populations might travel in order to cross-breed, the USFWS says part of its new management plan will be to transplant bears in one population into another region in order to ensure the communities’ health. The logic of this is problematic, Santarsiere says, and also belies the USFWS position that the Yellowstone grizzly population is healthy.

“I think to argue that they’re recovered but still have this need for potential man-made intervention to keep the population healthy is kind of a non sequitur to me,” she says.

The USFWS says part of the reason for capping the grizzly population in Yellowstone where it currently sits is because resources in the ecosystem necessary for grizzly survival have dwindled. Thus, less bears means adequate resources. But the Center for Biological Diversity says that the lessening availability of those resources, namely whitebark pine and Yellowstone cutthroat trout, exacerbated by climate change and drought, has forced grizzlies to eat more meat, which is available in livestock. Taking a broader approach to grizzly management, like the Center advocates, would lessen the burden on the Yellowstone population.

That approach would include reintroducing grizzlies to Idaho’s Selway-Bitterroot ecosystem, which was recognized in 1993 as a recovery area for grizzly populations by the USFWS, as well as other areas. Santarsiere says the second Bush administration caused plans for the reintroduction of bears to that region to falter.

Again, the USFWS delisting of Yellowstone grizzlies isn’t finalized, and the Center for Biological Diversity is working alongside other groups like Earthjustice, Sierra Club, Greater Yellowstone Coalition and more to provide feedback and recommendations to the USFWS that don’t include capping grizzly populations and opening up the animals for trophy hunts in Montana, Idaho and Wyoming. But like other wildlife issues in the region, a decision could be made much quicker if those states move quickly to adopt hunting rules.