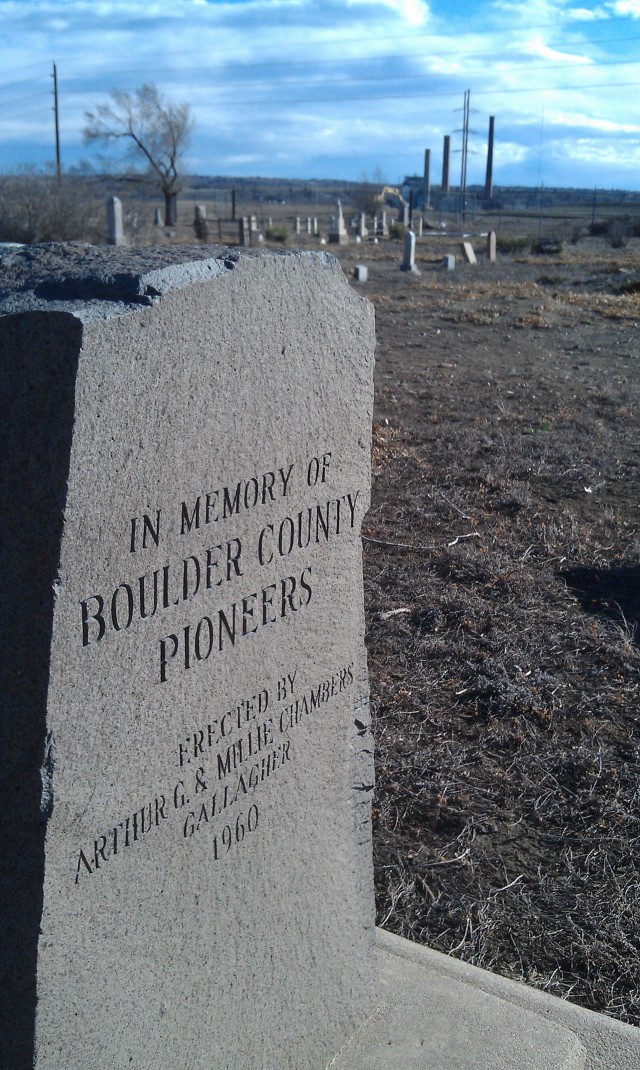 One of the key elements that will ultimately determine how many millions of dollars will be spent cleaning up contamination that originated from milling operations once located on the City of Boulder’s 103-acre Valmont Butte property is whether or not adjacent properties were also contaminated by those operations. The city, like the EPA and CDPHE, like to quote reports indicating that there is no evidence that contamination has spilled over to other properties. This is a bit misleading, however.

As can be seen on the map below, in three different locations, areas impacted by lead contamination (depicted in blue) appear to go right up to the fence line of adjacent properties, including the Valmont Cemetery and Xcel’s property to the south.

For the “no evidence of off-site contamination” argument to be true, we would have to believe that a half-century’s worth of windblown contamination was stopped dead in its tracks by chain-link and barbed wire fences. As we found during our investigation, “no evidence” of contamination actually means no testing for contamination.

As the city of Boulder prepares to begin earth-moving operations at the Valmont property, one of the most imminent issues is what might be unintentionally unearthed in the process.

Aside from the radioactive soils contaminated by heavy metals such as lead and arsenic that might be kicked up during remediation (officials say water trucks will be on hand to continually spray work areas down to eliminate dust), there are archeological and historical resources on the property that could also be disturbed.

As Boulder Weekly continues its series on “The Ghosts of Valmont Butte” and the environmental history of the property currently being remediated by the city, we will be dealing with threats to cultural assets one by one. Before we take on the topic of why the butte is sacred to Native Americans and why some Native artifacts and burial sites could be unearthed during the project, we will first turn our attention to the excavation of the Valmont Cemetery’s parking lot, which descendants of some pioneer families say could hide unmarked graves.

Pioneers first arrived in Boulder Valley in the late 1850s, when a party of miners made a base camp in the area. A few years later, in 1860, the town of Valmont’s first building, the Tommy Jones Stage Stop, was constructed, and the town of Valmont was platted soon after, in 1865.

Historical records show that the town of Valmont, on the north side of the butte, had three blacksmith shops, two general stores, one hardware store, two hotels, a school, two churches, the offices of three doctors, a newspaper and three saloons on the west end, known as “Devil’s Row.”

Valmont’s history from the town to the butte is rich with the best the times had to offer as well as the worst. For instance, according to one colorful account from 1867, while the editor of the Valmont newspaper was reportedly being entertained by friends at a local saloon, the paper’s hand-operated printing press was hijacked and taken to Boulder to be used by the Boulder Valley News. Losing its newspaper was important because Valmont had been trying to obtain the transfer of the county seat from Boulder.

On a darker note, nearby Fort Chambers was used as a militia training site by the early settlers, and soldiers from there participated in the infamous Sand Creek Massacre.

Today, there is little evidence remaining of those bygone days, and what little there is may now be threatened. Like the Native Americans who laid loved ones to rest at the butte, the rocky promontory above the plains was favored by Boulder Valley’s earliest Euro-American families as a suitable final resting place for the deceased. It is perhaps the last, best record of the first families who crossed the plains from the East to settle in Boulder Valley.

According to a 2004 archeological history of the butte by Peter Gleichman, the land for the Valmont Cemetery, also known as the Pioneer Cemetery, was platted the same year the railroads arrived, 1873, although some graves at the cemetery predate the plat.

Gleichman acknowledges in his 2004 study that local historians have said the cemetery “is not entirely enclosed by the fence. Some unmarked graves may be outside the fence, on the north and east … . These unmarked graves are from fatalities from the 1918 influenza epidemic (Teegarden, p.c). A buffer around the cemetery should be delineated, with no disturbance in the buffer. An alternative would be to attempt to locate the unmarked graves with remote sensing, i.e., ground-penetrating radar.”

But the city of Boulder plans to dig up contaminated earth that makes up the cemetery’s parking lot on the north side, within that buffer identified by Gleichman.

It is an approach that has upset members of the cemetery association.

A visit to the Valmont Cemetery, up a steep, rutted driveway off of 63rd Street, not far from the Stazio Ball Fields, offers good views of the property owned by most of the players in the Valmont Butte story. Western Disposal, which was involved in acquiring a contract for the city to buy its 103-acre parcel, has a hazardous materials processing site to the west. The fly ash-burying operations of Xcel’s Valmont Station nearly abut the cemetery to the south, with the coalburning power plant’s stacks towering just across the lake where the Allied mill once dumped at least some of its contamination.

To the east, the cemetery property drops down towards the black plastic fence which now delineates the perimeter of the 17-acre primary tailings pond (see map on page 10) on the city’s tract of land. The EPA estimates that this now dry pond is holding more than 300,000 tons of radioactive and heavy metals-contaminated mine tailings. The primary tailings pond is the location that the current remediation plan, submitted by the city and Honeywell, has established as the final resting place for all contaminated soils from the property. The plan, which is mainly focused on remediating lead and other heavy metals, calls for all contaminated soils from the secondary tailings pond (see map on page 10) and other areas on the city’s property, including the cemetery parking lot, should be dug up and transferred to the primary tailings pond beginning this month.

Carol Affleck, a spokesperson for the Valmont School District #4 Cemetery Association, and Jody Harper, whose parents, grandparents and other relatives are buried in the cemetery, want the city to use ground-penetrating radar to detect possible graves before they start churning up the earth on the north side of the cemetery. Harper says she recalls her father telling her he knew of burials that had been done on that north side of the fenceline, where the parking lot is now. He told her some were probably shallow graves, given how hard the ground is in the winter.

Affleck and Harper also say that Xcel, unlike the city of Boulder, agreed to use ground-penetrating radar along the cemetery’s property line to the south when the company started to work on that portion of its property. Using the radar allowed Xcel to discover burial sites before they could have been destroyed by earth-moving equipment.

According to an August 2005 report by Greystone Environmental Consultants, Inc., which was hired by Xcel to study the area south of the cemetery, ground-penetrating radar and surface inspection “identified human bone and cultural features that may be associated with additional graves outside the currently fenced area of the Early Pioneer Cemetery/Valmont Historic Cemetery.” The company recommended re-fencing the area and including a buffer around the identified features.

Affleck says the city refuses to use ground-penetrating radar before digging in the cemetery parking lot, despite the fact that one of the leading experts in the use of the technology to discover and map historic graves, University of Denver anthropology professor Lawrence Conyers, is practically in Boulder’s backyard.

When asked about the plans for digging up the cemetery parking lot, Joe Castro, the city’s director of facilities and fleet management, told Boulder Weekly that workers will only be removing 18 inches of soil, and that while city officials considered the use of ground-penetrating radar, that technology did not seem reliable.

“We didn’t think it would be an effective tool for the depth we would be digging to,” Castro says.

“We’re concerned, but we don’t anticipate bodies being buried in the first foot and a half of soil,” adds Bill Boyes, the city’s facilities maintenance program manager.

Even Gleichman has changed his stance regarding the buffer he recommended eight years ago. He explains that his 2004 study was done for a city contractor to prepare for the fire training center and bio-composting facility that were to be constructed at the property. (City officials later abandoned the plans for bio-composting and built the fire training center near the Boulder Reservoir.)

Gleichman says he now believes the buffer he recommended is impossible to maintain, since contamination has been found in the ground leading right up to the cemetery gates.

As for the failure to use ground-penetrating radar, he says it might be a question of cost.

“At this point, they’re thinking it’s too expensive, and they covered their bases with the archeological monitor,” Gleichman says.

Castro says the city didn’t look at a price comparison when it came to ground-penetrating radar, although he acknowledges that money is an issue when it comes to what remediation and renovation work is being done. In the case of restoring the historic buildings at the nearby millsite, he says the city plans to simply put a fence around the area.

But Gleichman says the fact that Boulder County has landmarked the site doesn’t permit such an approach when it comes to those structures.

“Demolition by neglect is something that landmarking should not allow,” he says.

Affleck agrees, asking whether other official county landmarks should be subjected to the same approach.

“Would we treat Boulder Falls or the Flatirons like Valmont Butte?” she asks.

It’s a good question, and it might just depend on who you ask — and how much it would cost if those landmarks were as contaminated as the butte.

Joel Dyer and Elizabeth Miller contributed to the reporting for this story.