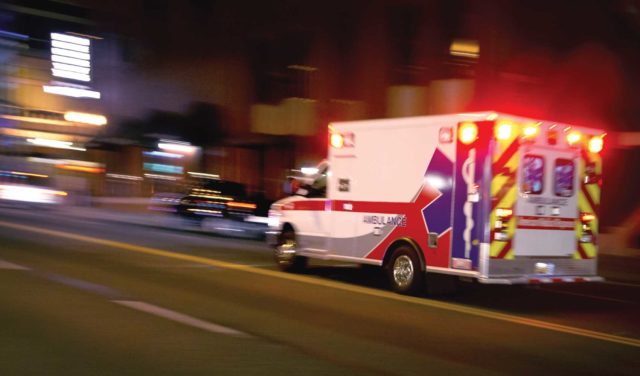 If you drive around Boulder County on any given day of the week, any time of day or night, you’re bound to see American Medical Response (AMR) ambulances lingering somewhere around town, engines idling.

They post up strategically, in lots outside coffee shops and restaurants, by schools or near parks. They wait, hanging out until their next call — when their radio squawks to life and they leap into action, charging off to help whomever might be in need.

It’s comforting, on a certain level, seeing these ambulances perched like guardians all around the county. But for the emergency medical service (EMS) crews within them, the days can be laborious. By nature it’s a high-stress occupation, and they’re either in the ambulance responding to an emergency, or in the ambulance waiting for one, all day long.

Things haven’t always been this way in Boulder County. Until 2014, AMR’s system of ambulance deployment was similar to the system used by Boulder’s firefighters — EMTs were on 48-hour shifts, and had EMS stations where they could sleep, eat and recuperate between emergency calls.

However, in an effort to increase efficiency, AMR decided to scrap those stations, cut the shifts back to around 10 hours and keep its ambulance crews in-position, in-ambulance for the duration of their day. This model is becoming the favored mode of operation for EMS providers in urban areas throughout Colorado, even if in other states people are actively advocating against it.

Christopher Williams, the operations chief at AMR, explains that the system, known as street corner posting, allows the company to dynamically deploy ambulances throughout the county, according to where and when call volume is expected to be largest. And it has proved effective, decreasing the response time to emergencies by nearly a minute and a half, which is crucial time saved in an emergency medical situation.

“We had a 90 second ‘shoot time,’” or the amount of time it takes for the ambulance crews to deploy from wherever they’re waiting,” Williams says. “Now it takes them three to five seconds to get on route to a call.”

According to Williams, yes. “Better response times and caregivers who run fewer responses because of a shorter time span [on call] allows crews to give excellent care,” he says.

Research published in the journal Prehospital Emergency Care supports  half of this belief. Longer shifts or excessive consecutive work hours do raise the potential for mistakes and generally decrease quality of care. The study found fatigued respondents faced 1.9 greater odds of injury, 2.2 greater odds of medical error and 3.6 greater odds of “safety-compromising behavior.”

However, another study published in Quality and Safety in Healthcare suggests that response times are a limited measure of success, and can conflict with other quality indicators like rapid transportation of the patient to the hospital.

“The strategies introduced to meet the (response time) targets can be detrimental to patient care and also have adverse effects on the health, safety, wellbeing, and morale of paramedics,” the study says, concluding that too much focus on reducing response times can put patients and ambulance crews at risk.

Patient care wasn’t the only motivation behind the switch to 10-hour shifts and street corner posting, though. It also saves AMR a lot of money, Williams says. When the company had to pay for EMS stations, it had to provide everything necessary for the EMS staff to essentially live there: beds, kitchens, TVs, couches and other furniture, on top of the cost of renting out a space.

For a company like AMR, which serves counties and municipalities all over the country, those costs can be daunting.

So, today, instead of having stations, Boulder paramedics and EMTs remain inside their ambulances. When they need to break for food, they can stop at hospitals, or at the AMR headquarters out at Foothills and Pearl.

“If people need breaks … we make sure to get them breaks,” Williams explains. “We rotate crews in and make sure they get a chance to go out and get food, or if they bring their food, that they can stop by headquarters and eat.”

Matt Landridge, an AMR operations captain and paramedic who has worked EMS in Boulder for over six years, says even though that’s an option, there isn’t really a whole lot of time to take breaks like that. The nature of their job requires them to stay on their toes and on the street.

“In EMS, there aren’t really ‘lunch breaks,’” Landridge says, chuckling. “We’re pretty much always posted somewhere waiting for a call or responding to a call.”

At certain times of the year, particularly during the university’s school year, and particularly on the weekends between midnight and 2 a.m., EMTs see a lot of action. On average they run about six calls every 12 hours, according to Williams. Though, he notes, depending on the time of year and time of day, that tends to vary.

During down periods and slow spells, AMR tries to reduce the number of ambulances posted on the streets, but someone’s always got to be out there. And they’ve got to be on high-alert for the duration of their shift — no matter if that means responding to one call an hour, or 10 hours of downtime.

Landridge seems indifferent to the street corner posting model. He says he has worked both from stations and from street corners and it doesn’t really bother him, either way. The biggest drawback he mentions is boredom — plain and simple. “It can get pretty boring being posted for 10 hours if it’s a slow day,” he says, adding, “But we usually see a lot of action.”

Not everyone was so impartial to the change, though, Williams admits. When asked how the change affected employee morale, he hesitated. “You know, there’s an ebb and flow of it,” he says. “It kind of just depends on the person, honestly. Some like it, some don’t.”

That was a sentiment echoed by Chris Dailey, the communications chairperson for the Emergency Medical Services Association of Colorado (EMSAC). “I can really say that I think it comes down to the individual,” he says. Some ambulance crews don’t mind hanging out in the vehicle killing time, he says. “But I know that there’s also a lot of people that fall on the side of the fence where they find it to be uncomfortable.”

Sitting in an ambulance for hours on end (especially if the vehicle has an exhaust leak or a broken air conditioner/heater) can be tiresome, even unhealthy, some paramedics argue.

It’s part of the reason Los Angeles County passed a bill (Proposition 11) in November with the specific intention of preventing a switch to the street corner posting model.

“Prop 11 basically says that [EMS crews] can be interrupted during their break time in times of emergency,” says Richard Tadeo, the assistant director for the Los Angeles County EMS. It is another solution to the same problem, he explains. By voting to allow EMTs to be interrupted while on break, LA is able to keep their EMS stations without switching to a street corner posting model.

“In fact, we really discourage street posting,” Tadeo says. “It’s not healthy for the individuals.”

Admittedly, LA and Boulder are difficult to compare for a lot of reasons, not least of which is size. But in Boulder there was no discussion of alternative options like LA’s Prop 11, let alone a vote. AMR quietly proposed the change to both the City and the County of Boulder, and it was silently approved by the Fire Department and Boulder County Sheriff’s Department in 2014.

It was the station deployment model that was taking a toll on Boulder’s EMS crews, explains Jeff Long, the deputy chief of operations for the Boulder Fire Department. Street corner posting is actually much easier on them, he argues, when compared with the old station model.

“What we found after a couple of years is that we were just destroying [AMR’s] crews with the call volume and they were not meeting their performance standards that they needed to,” he says. “That’s what drove the change in the contract model.”

The contract addendum was made after AMR’s proposal, the county set some performance standards for EMS (largely based on response times) and took their hands off the wheel of the ambulance business.

AMR is a private contract entity, after all, says Sergeant Dave Bootan of the Sheriff’s Department. Since AMR is not a true arm of the County or City, they have autonomy to make whatever operational changes they see fit.

“We contract for their services but we don’t tell them how to operate,” Bootan says. “Our bottom line is to make sure that the patient is being taken care of appropriately.”

If that means making a handful of EMS responders uncomfortable, then so be it. When the County sees reduced response times and lower expenditures tied up in the same solution, it’s difficult to make a case against street corner posting. It’s also likely why this model is becoming increasingly popular around the state.

It’s simply more effective to keep EMS locked and loaded, prepped and positioned to respond, than to trifle with the cost of EMS stations and the challenges they present. Street corner posting is becoming the industry standard in Colorado, and whether or not it is popular among ambulance crews seems to be irrelevant.