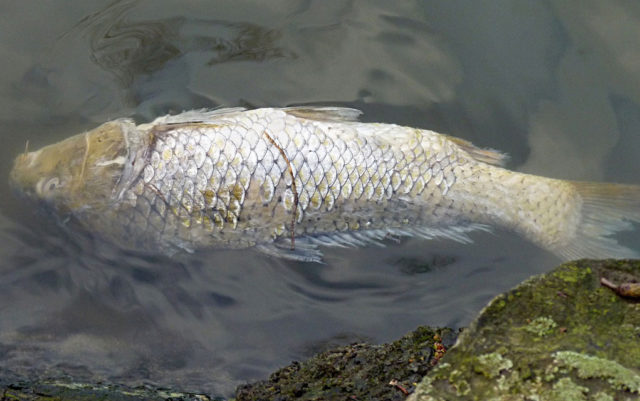 Major fish kill on the Poudre

Dozens of dead fish have been found along the banks of the Poudre River in Fort Collins, in what Colorado Parks and Wildlife is calling a major fish kill. The agency is still investigating the cause, according to reporting by The Coloradoan, but hypotheses include warmer-than-average temperatures and low river flows. Dead fish were first spotted on Sept. 21 by community members, and include trout, carp and fry.

CPW has not produced any formal, public communication about the incident, but The Coloradoan also reports that although exact numbers of dead fish have not been released, estimates are in the thousands.

The fish kill only adds to environmental concerns about the pending Northern Integrated Supply Project (NISP), which would create two reservoirs on the Poudre and further decrease river flows.

“The State must fully investigate and reveal the cause of this fish kill,” Gary Wockner of Save The Poudre said in a press release. “If it is related to warmer temperatures and lower flows, then climate change and NISP could turn the river through Fort Collins into a muddy, stinking, dead ditch, not a river ever again.”

Save the Poudre estimates roughly 63 percent of water in the Poudre never reaches the City of Fort Collins, as it’s diverted to other cities and agriculture higher up.

“NISP would basically kill the Poudre River through Fort Collins,” Wockner said. “The State and the Army Corps of Engineers must do a full analysis of the potential impacts of NISP including its low flows and interaction with climate change.”

September was unseasonably warm for Fort Collins, with a seven-day streak of 90-degree weather and average temperatures reaching five degrees warmer than normal.

Crestone filed an application in March 2017 to set up fracking operations on 10 square miles in eastern Boulder County. The Colorado Oil and Gas Conservation Commission (COGCC) approved the plans, even though the site covers County-owned open space and privately owned land under conservation easements.

Similarly, 8 North plans to place a 32-well pad on land protected by a County conservation easement. The County has appealed the COGCC’s approval of this site.

In its suit, the County says placing oil and gas drilling operations on these sites violates a state statute “that prohibits someone from injuring or destroying conservation values protected by a conservation easement.”

Oil and gas operators say they have a right to extract the minerals underneath these easement-protected lands because, in many cases, the surface property owner leased the mineral rights prior to the county putting an easement on the land. In a statement, Boudler County Commissioner Elise Jones explained why that’s not a valid argument.

“The nature of oil and gas drilling has changed dramatically in recent years, resulting in intensive, large-scale surface impacts to enable multi-mile long directional drilling,” Jones said. “Those old leases didn’t envision that the property could be harmed by a multi-well mega-pad used to frack minerals located miles away. It’s our duty to safeguard the environment and people of Boulder County and these lawsuits are our implementation of that responsibility. No one is above the law — including oil and gas companies.”

There are already several studies that have shown the health risks associated with living near unconventional oil and gas development, aka horizontally drilled and fracked shale production. But a new study published Oct. 1 in Environmental Health Perspectives (EHP) may be the largest such research project to date and examines phase- and trimester-specific associations between unconventional gas activity and pre-term birth.

According to the study’s lead author, Kristina Whitworth, an epidemiologist at UTHealth School of Public Health in San Antonio, Texas, “Activity is a proxy for a multitude of exposures.” The study sites everything from exposure to chemicals including endocrine disrupters used in fracking fluid to contaminated air emissions to non-chemical stressors such as noise and light pollution as part of the mix that is likely causing the problems during pregnancy.

The article in EHP notes that the study found, “women living near the most drilling and production activity had an estimated 20 percent and 15 percent (respectively) higher risk of pre-term birth, compared with women with no drilling activity near their homes. In their statistical analysis, the researchers controlled for other factors that could affect pre-term birth, including the mother’s education level and pre-pregnancy weight, whether she smoked during pregnancy, and the number and timing of her prenatal health-care visits.”

The results of this large study, which examined the records from approximately 80,000 births occurring within the Barnett Shale play in Texas, should offer additional support to proponents of Proposition 112 this November. Proposition 112 is on the ballot and would create 2,500-foot setbacks between homes, schools and water supplies from oil and gas development. It also raises further questions about industry-funded advertising being run in opposition to Proposition 112, which claims that the expanded setbacks would not increase safety.