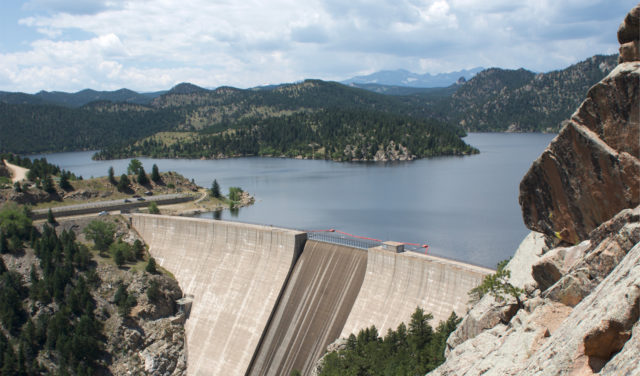 Boulder County Land Use Director Dale Case announced on Oct. 23 that Denver Water must receive a permit from Boulder County in order to proceed with its expansion of Gross Reservoir.

Denver Water has plans to raise the dam at Gross Reservoir by 131 feet in order to accommodate what they project as increased water needs in the Denver metro area in the coming decades. The expansion would increase Gross Reservoir’s capacity by 25 billion gallons (which, itself, would comprise about six times the capacity of Boulder Reservoir, for reference).

Critics of the plan, which include environmental groups and those who live near the reservoir, say the expansion is unnecessary because conservation has proven to be effective — Denver Water users have reduced consumption by 22 percent since 2002 despite the utility’s service area experiencing a 10-percent increase in population. Too, critics of the plan say diverting that much more water to Gross Reservoir will effectively kill the Colorado and Fraser Rivers.

The U.S. Army Corps of Engineers granted Denver Water approval for the project in August 2017. The project still needs approval from the Federal Energy Regulatory Commission (FERC). But there was some debate between Boulder County and Denver Water about whether the water utility would need to apply for and receive a permit from the County, as well. Though the expansion would not be a Boulder County-run project, the reservoir does reside in its jurisdiction, and the County argued it has broad authority to review projects within its boundaries. Denver Water claimed there is an exemption in state zoning law that would allow it to bypass the County permitting process. In his determination on Oct. 23, Case disagreed.

Denver Water is allowed to appeal Case’s decision to the Boulder County Board of Commissioners.

The Boulder County Commissioners publicly condemned a surge of $10 million in funding by those in support of Amendment 74 to promote passage of the ballot issue.

The Commissioners wrote on Oct. 22 that Amendment 74, which would allow land owners to recoup losses for decisions made by the government that affect their property values, is a “dangerous and deceptive” ploy by the oil and gas industry.

“The oil and gas industry is pouring millions of dollars into this terrible proposed constitutional amendment aimed at disrupting our communities at a fundamental level,” said Commissioner Deb Gardner in a statement. “Each dollar spent underscores the industry’s adversarial approach to government and regulation. This industry likes to tell my constituents they are partners who wish to work with government regulators but its support of Amendment 74 show industry’s true colors.”

Critics of Amendment 74 (Boulder Weekly recommended a no vote on this issue) say it’s a cynical plot by the oil and gas industry to punish any governing body that wants to limit extraction in any way, and that the collateral damage of the amendment would bankrupt municipalities and counties.

“I have little doubt that the oil and gas industry will attempt to use Amendment 74 to betray the basic values that make Colorado a great place to live,” said Commissioner Cindy Domenico in a statement. “No one knows the real effect of the amendment, but many people are concerned that it could bankrupt local governments and roll back the basic zoning and land use regulations that Coloradans take for granted. That’s why every responsible party in the state is urging a NO vote on Amendment 74.”