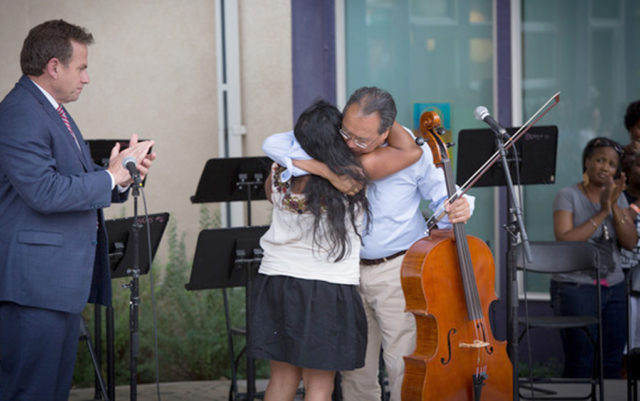 World-renowned cellist Yo-Yo Ma is on a mission to turn culture into action by bringing together communities and organizations to address the most pressing social issues of our time. He was in Denver on Aug. 2, traveling between different nonprofits and community organizations, creating dialogue and responding with music.

At an event in collaboration with Youth on Record, Boulderite Ana Casas shared her autobiographical monologue about her brother’s deportation following a marijuana possession charge. She was accompanied by former Boulder County District Attorney Stan Garnett, who has been helping Casas share her story through Motus Theater’s production of Do You Know Who I Am? read by law enforcement officers.

In response to her story, Ma played “Song of the Birds,” a Catalan folk song about family.

“Music, like all of culture, helps us to understand our environment, each other and ourselves,” Ma said, according to a press release from Motus Theater. “Culture helps us to imagine a better future. Culture helps turn ‘them’ into ‘us.’ And these things have never been more important.”

The Aug. 2 event was the beginning of Ma’s two-year tour across six continents focusing on the culture in action project and associated with the release of a new album, Six Evolutions, a recording of Bach’s Cello Suites. He played at Red Rocks Amphitheatre the night before.

The group needed to collect at least 98,492 signatures from registered voters in Colorado by the Monday deadline. If enough signatures are certified (a certain portion of signatures on most petitions are thrown out for various reasons), Colorado voters will be able to decide in November if they want to enact 2,500-foot setbacks on all new oil and gas operations in the state.

“We are proud and thankful for this monumental effort by the people of Colorado to create a commonsense setback from this increasingly brazen and destructive industry. We are committed to protecting our neighborhoods from this explosive and toxic industrial development that risks our children’s health and jeopardizes the safety of our homes,” said Colorado Rising President Tricia Olson in a press release.

Colorado Rising made multiple claims over the last several weeks that protesters were being organized to interrupt their efforts and intimidate potential signers. The group said about 750 volunteers across the state helped collect the signatures.

“Should Initiative 97 qualify for the ballot, there will not be an issue that would have a more devastating impact on the statewide ballot this year,” said Tracee Bentley, executive director of the Colorado Petroleum Council, in a press release. “This disastrous proposal will negatively impact every Coloradan’s pocketbook, will reduce the quality of life that we value in Colorado, and cost thousands of jobs.”

Proposition 108 also received enough signatures. It’s backed by the Colorado Farm Bureau and the oil and gas industry, and would allow for property and mineral owners to sue local and state governments when their actions (perhaps such as instituting setbacks) devalue their assets.

Arts and Culture Editor Caitlin Rockett won first place in Music Writing for several pieces published in 2017 — a story on Bonobo that painted the popular artist in a new light, a thought-provoking conversation with Marilyn Manson’s guitarist Tyler Bates, and an intimate feature of Vagabon, aka Laeticia Tamko.

Rockett also earned second place in the Arts Feature category for her story, “Roots and Shoots,” which profiled a program about animal behavior for inmates in the Boulder County jail.

Winning an AAN award, let alone three, is a high honor for any alt weekly. This year’s winners were chosen from a field of nearly 700 entries submitted by 55 alternative publications across North America.