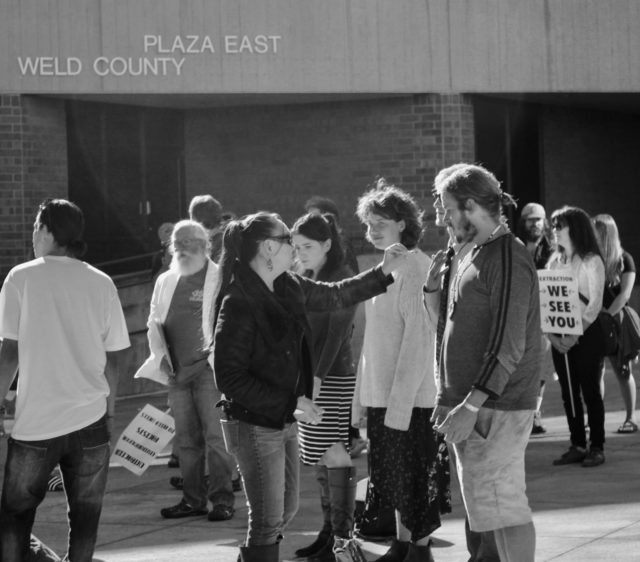 On June 20, a small group of people gathered in the Weld County Courthouse in support of Cullen Lobe and others who faced a civil lawsuit brought against them by Extraction Oil and Gas.

In early March, Lobe locked himself to a bulldozer on a site owned and operated by Extraction in protest of its close proximity to Bella Romero Academy, which is populated predominantly by Latino and low-income students. Polsinelli LLP, on behalf of Extraction, then sued Lobe and others. As a result of the hearing, the civil lawsuit against Lobe, Mary Elise Delffs, Jeremy Mack and Brian Hedden was dropped with the requirement they not trespass on Extraction’s lands.

Lobe’s lawyer, Jason Flores-Williams, says he’s glad to get through the lawsuit with Lobe not paying any damages, with the activists’ integrity in tact, and free to continue fighting injustice in the world.

Meanwhile, a lawsuit brought by citizens near Bella Romero against the COGCC for permitting the site awaits judgment.

The complaint outlines “woefully inadequate medical and mental health care” at the facility, supported by first-hand accounts and personal testimonies of both current and former detainees, including the death of two detainees since 2012.

Part of the problem also has to do with the fact that “the ICE detention standards are not codified in regulations and are virtually impossible to enforce.” And in addition to demanding an immediate and independent review of the facility, the organizations ask that ICE enact binding and enforceable regulations for how to treat detainees at its facilities.

Originally contracted to house 150 detainees in the 1980s, the facility now has an approved capacity of 1,532.

In a ruling that may have regional implications, a U.S. District Court struck down a roughly 20,000-acre oil and gas lease sale on June 14, citing the Bureau of Land Management’s (BLM) inability to quantify the life cycle of oil and gas emissions.

The U.S. District Court for the District of New Mexico also found that BLM did not outline water quality impacts from fracking in the region, in this case, Santa Fe National Forest.

Environmentalists hailed the ruling as a small victory.

“The law requires the government to look before they leap into fracking on our public lands, which includes an honest look at how the continued exploitation of oil and gas will impact our climate and future generations” said Kyle Tisdel of the Western Environmental Law Center, in a statement. “This decision rejects the rubber stamp mentality of our public land managers on the Santa Fe National Forest, even as the government continues to approve unstudied fracking throughout New Mexico’s Greater Chaco region.”