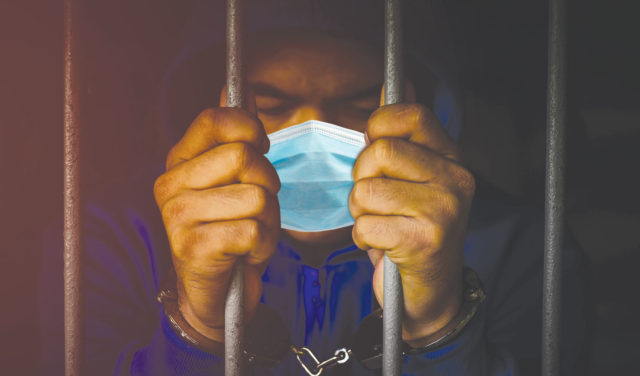 The Boulder County Jail only had 199 inmates on Friday, May 22 — a record low, according to Sheriff Joe Pelle. The daily average has hovered below 250 since the jail, in conjunction with the District Attorney’s office, started releasing people at the end of March due to coronavirus concerns. Before the pandemic, the average daily jail population was 460.

The Boulder County jail has been historically plagued by overcrowding, but it seems that the threat of an infectious disease has achieved what County-funded studies and expert recommendations have not been able to — cutting the jail population by more than half.

What does this mean for the future of criminal justice reform?

“They say crisis is the mother of invention,” says Christi Donner, executive director and founder of the Colorado Criminal Justice Reform Coalition (CCJRC). “There’s a lot of things that we do in criminal justice that we do just because we’ve always done it this way. And I think these kinds of situations make us reflect and say, is that really how we have to do it?”

Around the country, jails and prisons have become a hotbed of contagion since the start of the coronavirus pandemic. In Colorado, there have been approximately 700 confirmed and probable cases in both inmates and staff at prisons and jails according to state outbreak data released on May 20. When halfway houses are included, the number jumps even higher. To stop the spread of the disease, local jails and the Colorado Department of Corrections (DOC) have been working to release inmates who meet certain criteria early.

At the local level, Pelle says at least three Sheriff’s Department employees have tested positive, one of which was in the jail, but overall the Boulder County Jail hasn’t had any cases of COVID-19 within its inmate population. Boulder County District Attorney Michael Dougherty says his office took early steps to reduce the jail population by reviewing each case to determine who should be released.

“As individuals and as a criminal justice system, we’re going to be able to learn a lot from this health crisis in terms of how we can improve,” he says. “We’ll be able to take a look at the data surrounding the decisions we’ve made and things that have happened during this time period and look to apply those to the future, both in terms of how we can be more efficient, but also how we can improve the system as a whole.”

Not only have people been released, Pelle says, but the County arrest standards were also amended to severely restrict who is accepted at the jail. Those with municipal offenses (such as warrants and probable cause charges) as well as misdemeanors (with the exception of state-mandated offenses such as domestic violence and multiple DUI offenders) aren’t being held. Openly defying a peace officer and residential and business burglary can land some in jail under the current standards, however, Pelle says.

Additionally, since the start of the pandemic, individuals who are facing multiple charges in different jurisdictions haven’t been shuffled between jails in different counties to attend court appearances, as those have been moved to video conferencing. It’s a change in pre-trial services that could last.

“It’s actually a better, smarter, more efficient way to do business,” Pelle says. “It’s something the courts have been forced to adapt to because of the virus. But I think this is one of those things that we will see used more universally in the future regardless of the virus.”

At the DOC level, Public Information Officer Annie Skinner says it’s too early to tell what the pandemic can teach us when it comes to criminal justice reform.

“What it has shown so far is the importance of the work that is being done inside our facilities to break down the us-versus-them culture between staff and inmates,” she writes. “The normalization work that has already been done inside prisons has allowed staff and inmates to face the challenges this virus poses in a cooperative, patient and respectful way.

When it comes to the DOC, Donner says, the releases mostly come down to simply speeding up the process. Previously, she says, it took 45 days to process final paperwork after the parole board decided to release someone from DOC. Now, she says, it’s taking just five days.

Emily Kleeman the executive director at The Reentry Initiative (TRI), says the organization was getting four to six referrals from Longmont parole a month. Now, it’s getting roughly 10 or so a week. Kleeman says she sees the recent releases as a positive step toward creating a more just system.

“I think it’s making us reevaluate why we have harsher punishments for low-level first-time offenders over the ones that really do need to be isolated from the community for safety,” she says.

Still, none of what’s happening is “radical reform,” Donner says. “Every crack in the sidewalk is also showing up.”

Donner says she’s concerned about the “jail backlog” — people who have been sentenced to prison but who are sitting in county jails because the DOC is slow to admit new inmates during all of this. Statewide, she says, the backlog is up to 500 people. The Boulder County Jail, Pelle says, was holding 10 people with felony convictions waiting to enter the prison system until they were transferred on May 22. Currently there are six people with felony parole violations awaiting transfer, he says.

Pelle also expresses concerns about cuts to justice-based behavioral health funding as lawmakers face balancing a budget with a $3.3 million shortfall as the legislature resumed on May 26. Although the jail has seen a significant decrease in its population, the percentage of people with mental illness or substance abuse still being held jumped from 40% to 80%, he says. Another crack in the system, according to Donner.

She’s also concerned about responsible medical transition as people are released from places with known cases of COVID-19. “It’s complicated, but we have to be thinking about that,” she says. “It’s so much more complicated than just reducing the population.”

(Skinner says inmates are educated about the virus before release and can be connected to community resources through their parole officers.)

Plus, Donner expects that a return to normalcy will just fill back up the jails.

“It’s not like, Oh, what we used to be able to do, we can no longer do. We just stopped doing it for a minute,” she says.  “I don’t think that we’re getting to the root of anything. We’re just reacting to things.”

“I don’t think these low numbers are going to last,” Pelle adds.

He suspects the numbers to increase once jury trials and court sentencing resumes in July, as many cases have been postponed due to the pandemic. Dougherty says it’s something his office is working hard to prepare for, including resolving cases ahead of court dates.

He for one sees this as an opportunity to effect lasting change within the criminal justice system.

“I think it would be a mistake for us to simply go back to things as normal without looking at it with a critical eye to see how we can improve the justice system and what efficiencies and changes we can develop as a result of this pandemic,” he says.