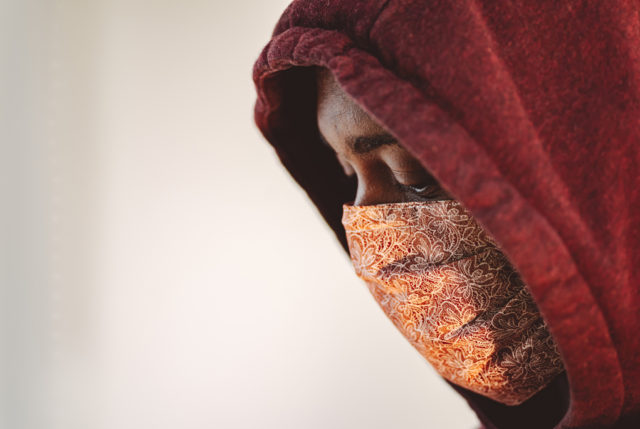 When the CDC urged everyone to wear cloth face masks when out in public to slow the spread of the coronavirus at the beginning of April, people of color around the country expressed hesitation.

“I thought I could use one of my old bandannas as a mask. But then my voice of self-protection reminded me that I, a black man, cannot walk into a store with a bandanna covering the greater part of my face if I also expect to walk out of that store,” Aaron Thomas, from Columbus, Ohio, wrote in an opinion piece for the Boston Globe. “For me, the fear of being mistaken for an armed robber or assailant is greater than the fear of contracting COVID-19.”

Now jurisdictions across Colorado are mandating public facial coverings from Aspen and Summit County to Denver, Fort Collins and of course both the City of Boulder and Boulder County. And local groups, like the NAACP Boulder County branch, are concerned that the mandates will only add to discrimination and negative impressions about people of color.

“The fact that we’re required to wear masks now just amplifies it and adds to racism,” says Madelyn Strong Woodley, a lifetime member of the NAACP Boulder County who lives in Longmont. “Discrimination happened before the pandemic, it’s going to happen after the pandemic if we get through it, [but] particularly adding the requirement of a mask for African Americans is going to present issues that ordinarily wouldn’t be.”

She says that it just adds to the perception that some people already have about black people and face coverings. “In their minds, you’re able to hide and not be identified thus giving you more freedom in their minds to steal, which they already think we do anyway,” she says.

“It’s that look of distrust, a suspiciousness, the ‘I don’t know what you’re here for,’” adds Woodley’s sister Glenda Strong Robinson, a board member of the NAACP, who has lived in Longmont for more than 40 years. Recently, Robinson says, she was at Home Depot, wearing a mask, when she got out of the long checkout line to ask an employee a question about an item she couldn’t find. She says the man was abrupt and rude to her, brushing off her question and telling her she had to go back to the end of the line.

“He never once intended to help me,” Robinson says. “I did not want to cause a scene, so I finally went on my own and found [someone else].”

In the County’s announcement of the “Public Health Facial Covering Order,” scheduled to take effect on May 9, Boulder County Public Health Executive Director Jeff Zayach acknowledged “reports of discrimination associated with mask wearing,” but appealed to a public sense of solidarity as the virus does not discriminate. “There is simply no place for discrimination. We can and will solve this problem together,” he said.

The order requires everyone above the age of 12 to wear face coverings anywhere outside the home where maintaining six feet of separation is difficult.

“We did think long and hard about a mask requirement because of the discrimination issues that we had heard [in national media] as well as mandating something that not everyone has access to,” says Chana Goussetis with Boulder County. “But we decided to go ahead not because cloth face masks are the panacea solution, but they are one tool in the toolbox to help prevent droplets moving from one person to the next. We decided that it was important for us to do everything we can to help people stay safe.”

The City of Boulder adopted a similar policy on April 30 that mandates everyone wear “non-medical face coverings” both inside and outside businesses where services are provided. The hope is to prevent the spread of the coronavirus from the mask wearer to others, says Boulder Mayor Sam Weaver, even if it means people must adjust their perspective.

“Culturally and socially we’re all going to have to get used to seeing masks on each other and that is something that regardless of race or ethnicity we have not had to deal with a lot before,” he says. “It’s a cultural shift for us and that includes perceptions of people of color with masks on being somehow more threatening than if they don’t have a mask on. I believe that’s something that all of us have to adapt to. To the extent that it’s a real problem we need to speak about it and address it frankly.”

Both the City and County mandates come with enforcement provisions, which for the County includes a $5,000 fine and up to a year in jail. Although, Goussetis says the point of the order is education not punishment. “That’s not the purpose. The purpose is for people to be aware and take action to protect themselves and others around them,” she says.

Still, Robinson and Woodley question how law enforcement agencies will interact with communities of color with regard to the new facial covering mandates.

“It’s like the police situation when you’re out in public and you’re an African American male: ‘I don’t want to die today. I don’t want to get confronted. I don’t want to get beat up. I don’t want to have a confrontation with you,’” Robinson says. “Of course, I’m an older black woman, so that won’t necessarily happen. But depending on how I responded to that man [at Home Depot] we could’ve had a showdown right then and there.”

The NAACP Boulder County branch launched an online survey on May 5 seeking to collect data on discrimination and microaggression incidents related to the coronavirus in Boulder County. The survey asks participants how comfortable they are wearing a mask in public and if they were wearing one when they experienced discrimination, among other details.

“Boulder County residents may have had to endure an incident in a store where another patron or an employee was distrustful or harassed them,” says Susan Pfretzschner, communications chair for NAACP Boulder County. “We’re trying to document that. We have a good idea that it’s happening, but we don’t have the data.”

Still, Robinson and Woodley say that they are wearing face coverings when going out in public, despite the very real possibility it will lead to some sort of discrimination incident.

“You deal with it. It’s going to happen,” Woodley says. “What else can we do?”