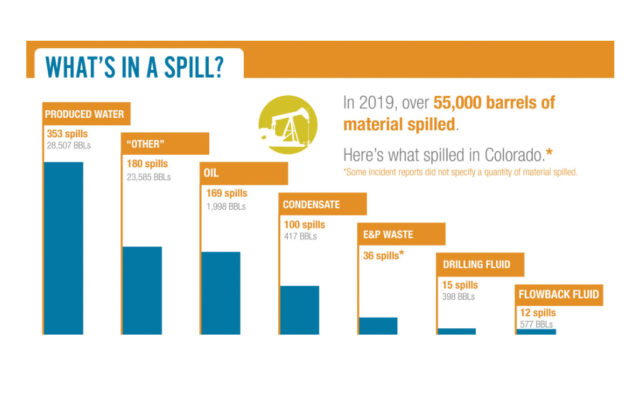 Toxic spills related to oil and gas production in Colorado increased about 7% in 2019 compared to 2018. That’s according to a new report from the Center for Western Priorities (CWP), a conservation policy organization based in Denver. This increase occurred despite the passage of SB-181 last year, an effort intended to better regulate the industry in the interest of protecting public health, safety and the environment.

The report is part of a broader look at the industry’s impact across the West’s largest oil-producing states: Wyoming, New Mexico and Colorado. Across the three states, there were 2,800 reported spills in 2019, accounting for 230,000 barrels of oil and wastewater.

“Where there is drilling, there will be spills; it’s inevitable,” says Jesse Prentice-Dunn, policy director at CWP. “[This report] really helps get a little more of a sense of the impacts.”

Despite their close geographic proximity, there is no standard process for reporting oil and gas contamination in the three states covered by the report. For instance, Colorado is the only state that requires companies to report how close spills are to occupied structures and water sources.

In Colorado, CWP analyzed self-reported spill information from the Colorado Oil and Gas Conservation Commission’s website, like it’s done every year since 2012.

Since then, there have been 60% more spills across the state, largely concentrated in Weld County, with significant numbers out west in Rio Blanco and Garfield counties as well. Adams and Las Animas counties also reported between 16 and 25 spills each. Not only did the number of spills grow, but the volume of material released increased significantly: 55,000 barrels of produced water, oil, condensate and other materials in 2019.

“[This report] shows a continued need for public health and environmental safeguards, and enforcing those well,” says Prentice-Dunn. “Colorado certainly has made strides in inspections and enforcement and that’s something other states can learn from. But I think the message is the job’s not done, that there’s a continued need for it.”