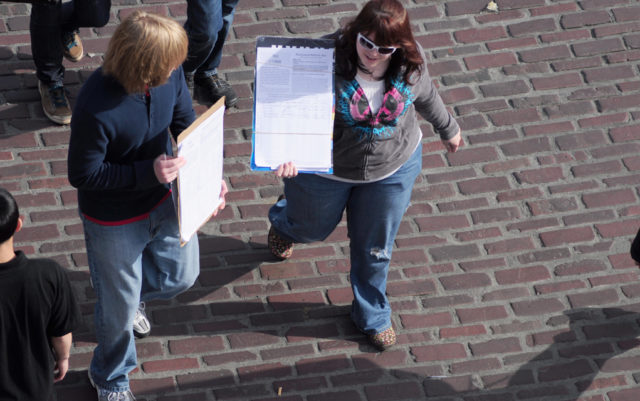 Last November, City of Boulder voters approved a measure by a nearly 3-to-1 margin to allow electronic and online signature-gathering for future ballot initiative, referendum and recall petitions. That means residents want to be able to add their signature to ballot initiatives, online, from home, instead of having to find signature-gatherers scattered about the city, sign in print, and, for the gatherers at least, wait for those signatures to be verified. At the very least, the measure allows signature-gatherers to use tablets to collect signatures, which automatically verifies signers’ residency and voting status.

There’s only one problem: It’s not clear that software exists yet to implement such a system. The Boulder City Council determined as much last month after talking to City Attorney Tom Carr, a working group assembled to research implementing the measure (Ballot Question 2G), and city staff.

City staff recommended on March 5 that 2G be implemented in two phases: First, allow for electronic signature-gathering before the 2019 election by purchasing and using software developed by the City and County of Denver, eSign, for about $21,000 up-front, with a $1,500 fee per year to continue using it. By agreeing to adopt this software, Carr said, “There will be something in place to honor what the voters passed last year,” and to “let voters know we’re working on this.”

In the second phase, City staff would research software that would allow for online, at-home signatures, and would address issues like privacy, data-sharing, voter verification and more.

Working group member Matt Benjamin agreed with Carr that breaking implementation into two phases would be “expeditious,” as “phase two of online petitioning is a different beast unto itself.”

But Council was hesitant to adopt eSign because it seemed like a short-term, expensive fix. Plus, it would be hard to adopt before the 2019 election because the City and County of Denver has their own elections in May they need to handle and wouldn’t be able to assist Boulder until June.

“If this is a one-off, one-year thing that doesn’t have community support for tablet signatures, we shouldn’t bother,” Councilman Sam Weaver said.

So Council tabled the discussion and sent staff back to the drawing board. City Manager Jane Brautigam said staff will spend time determining what exactly they’d like to find out in a request for information (RFI), and would present those findings to Council in mid- to late-April.

Denver, then, may ultimately represent the best case study, at least in electronic signature-gathering. And it claims it is the first jurisdiction in the U.S. to develop such capabilities. The eSign app interfaces with voter registration records for on-the-spot verification of petition signers, and the app keeps a running tally of total signatures.

Though still nebulous, Boulder staff indicated they’d be working with internal IT staff to determine the City’s existing capability to develop software that will allow for online signature-gathering. In the meantime, they will determine what kinds of information they need from outside tech companies, potentially those in Boulder, to move forward with fulfilling 2G.