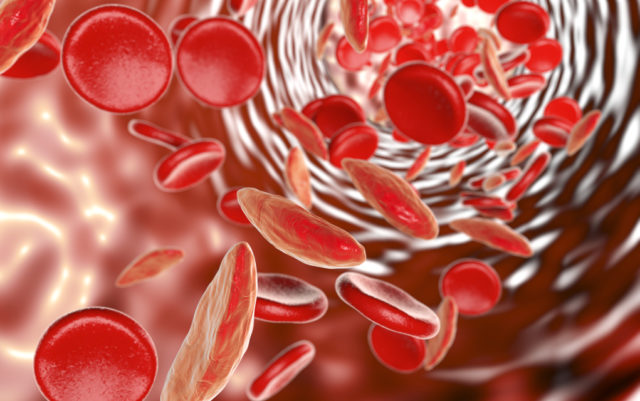 Juneteenth celebrates African American freedom, commemorating the end of slavery in the U.S. and acknowledging a period in history that has had long-lasting influences in our society. But June 19 is also World Sickle Cell Day, declared so in 2008 by the United Nations to raise international awareness about “one of the world’s foremost genetic diseases” that predominately affects people of African descent. Millions of people are affected globally, and, according to the Centers for Disease Control, more than 100,000 Americans are living with sickle cell disease.

In Colorado, the state legislature created The Sickle Cell Research and Treatment Center in the early 1970s as part of the CU School of Medicine on the Anschutz Medical Campus. With an emphasis on research and education, the purpose of the Center is to “help to assure that persons living with sickle cell disease across the lifespan have the specialty services that they need [and] to be champions in the systems where sickle cell patients receive care,” says Director Dr. Kathryn Hassell.

The Center, including the pediatric program at Children’s Hospital, serves about 450 people (250 children, 200 adults), 90% to 95% of whom are African American, Hassell says. There’s also a cohort of people from the Middle East, as well as a small percentage of Hispanic individuals and a few folks who are Caucasian.

“It does affect often persons of color, but it can exist in any person,” she says. “That’s why we screen every baby born for the disease because we can’t, and shouldn’t, make an assumption, especially in the modern world, about what your heritage is.”

We recently spoke with Dr. Hassell and her colleague Dr. Rachelle Nuss, associate director of the Center in charge of the pediatric program, about sickle cell, the challenges to treatment and the possibility of a cure.

The interview has been edited for length and clarity.

Q: Can you describe sickle cell disease and how it affects the body?

Kathryn Hassell: Sickle cell disease is a genetic disorder of the hemoglobin, which is what is found in red blood cells and carries oxygen. The hemoglobin is made up of proteins, and there are two genes that regulate it. In genetics, we refer to something as a trait when one gene is normal and one gene is abnormal, in this case the sickle mutation, so we call it a sickle cell trait.

When both genes have the sickle mutation, you then have what’s called sickle cell anemia. That’s the most usual form of the disease. That means that you don’t make any normal hemoglobin, you make only sickle hemoglobin and in a reduced concentration. Under certain conditions, it can form a kind of gel inside the red cells called polymerization, and it can cause this cell to change shape and become like a sickle.

If it was only anemia, we could fix that. But the problem is those blood cells get stuck inside blood vessels and can cause organ damage and very severe pain. And all of this is simply because there’s one little point in each of their hemoglobin genes that’s mutated, and this has all these downstream consequences.

Rachelle Nuss: I would add, a unique thing about sickle cell in Colorado is that when you go to higher altitude, your red blood cells have less oxygen and that tends to cause the red cells to sickle. So many people think it’s not advisable for people with sickle cell disease to live in Colorado. In fact, the vast majority of people we treat are on the Front Range because higher altitude is detrimental to their health.

RN: Children can start having horrendous, usually described as stabbing, pain in their bones early in childhood. They can even start as infants and develop horrible, painful, swollen hands and feet where they require narcotics, even as young as six months old.

The pain in childhood could require hospitalization — if the families couldn’t manage at home with opiates — for about three days receiving intravenous narcotics. By the time the children are teenagers, they often need to stay for longer periods. As a complication of developing pain, about 20% of the hospitalized children will then go on to develop something called an acute chest crisis or development of an opacity in their lungs, which is life-threatening.

KH: This disease at any stage in life can create those episodes or what we call crisis, and the idea behind that on a medical basis is that blood flow is usually temporarily, but severely, constrained into muscles, tissues, bone. And that can obviously create severe pain and then there’s inflammation and maybe it swells some, maybe not visibly, but picture internally a real chaos.

I’ve had people with gunshot wounds say, “Give me a gunshot,” instead of have sickle cell pain. I’ve had other people who have delivered without anesthesia say, “I’ll sooner birth a baby than give me another crisis.” Again, this is really severe pain, which is why we give it opiates.

The challenge in adulthood is the development of chronic pain, and then there’s the challenge of people of color in a system where often they’re working with white folks. Young people come in, look OK, but they say they have horrible pain. They say, “I need my morphine.” … It doesn’t always go well.

RN: A real misconception is that people are drug-seeking and that’s a huge issue in the emergency room or if families see a doctor who is not really familiar with sickle cell disease and the pain that it can cause.

KH: I think it speaks to core societal issues, both around mistrust, judgment, bias and racism, but also around the whole issue that’s been created with the opiate crisis. So what I do in my educational efforts is point out that the CDC made strong statements after the opiate crisis document came to say, “Oops, we didn’t mean sickle cell… sickle cell should be treated like cancer pain.” And I’ve been able to utilize that with my colleagues and the health care system because they just assumed if you’re young, you shouldn’t be on opiates because clearly no one needs it. But then we’re back to the usual level of bias about a young person of color who seems to know what their drug doses are, that must mean they just know what they need to get high. And that’s an ongoing struggle.

Q: How do other issues of systemic racism show up in your work?

RN: At our Children’s Hospital, we have the whole gamut of treatment options available. The real limitation is the families being able to access all the care that the children need. We see a lot of people who need to access food stamps. People don’t have transportation. People have a lot of housing issues. People who are working can’t afford to take the time off to bring their children in for all the visits that are needed. Although the care is available, being able to access the care with frequency is not often a reasonable expectation for the family.

KH: The disparity is at multiple levels in terms of the hurdles to overcome. The people in the communities affected have plenty on their plate with disadvantages in so many other arenas.

Q: What about funding? Is there sufficient money going toward treatment and finding a cure?

RN: It has always been a struggle financially. Taking care of the patients is really labor-intensive and not profitable to health care systems. One of my friends, who is a Boulder resident, donated money towards patient aid, and that money has been helpful for assisting families with security deposits that they wouldn’t otherwise have. It allowed one young girl to get an oxygen concentrator so she didn’t need to take along a big tank with her. It allowed us to give families gift cards for food. But that was a very unique donation. In general, people do not donate money towards sickle cell. When a support group tries to do a fundraiser, if they raise $1,500, they consider that successful.

KH: I’ve been doing this for 25 years almost, and I could count on less than one hand the number of companies and even National Institutes of Health funds that went to sickle cell — research, protocols, programs, et cetera.

Just recently colleagues came out with a comparison to cystic fibrosis, which has far fewer individuals (about 30,000 nationwide), but with a much more diverse background and often Caucasian individuals affected, with a strong advocacy group.

But there’s been a huge influx in the last five to 10 years in pharmaceutical and other research dollars to understand how to modify and/or cure this disease. But none of them are going to pay Dr. Nuss or me to do the care, or the nurse in the clinic or the social worker or the psychologists. And so that’s where the disconnect comes in. I’m hopeful on the one hand, because at least there’s attention being paid, but on the other, there’s still the reality on the ground for the day-to-day care of the individual where resources are limited.

RN: Bone marrow transplant is curative. Ideally someone would have a match in a brother or sister, but that only occurs about 18% of the time. We have been participating in a national study looking at a half match for bone marrow transplant. And so far, we have four individuals on that trial, and they are all cured, so that’s very promising for the future.

There is also research data that gene therapy is a curative option, although it’s very early in its stages.

KH: I would say we have not yet figured out how to cure this disease using gene therapy. There are lots of different approaches, but it’s not as simple as just chopping out the bad gene and putting in the good genes. A lot of what’s being done with gene therapy is to simply insert genetic material that makes normal or even super normal hemoglobin but doesn’t necessarily turn off the sickle gene.

So it is, as Dr. Nuss said, a work in progress. Most of the individuals who have experienced gene therapy with sickle cell disease still make sickle hemoglobin, they just make less of it. And of course, how long do those changes last in those cells that were corrected? So far, it looks good, but time will tell.