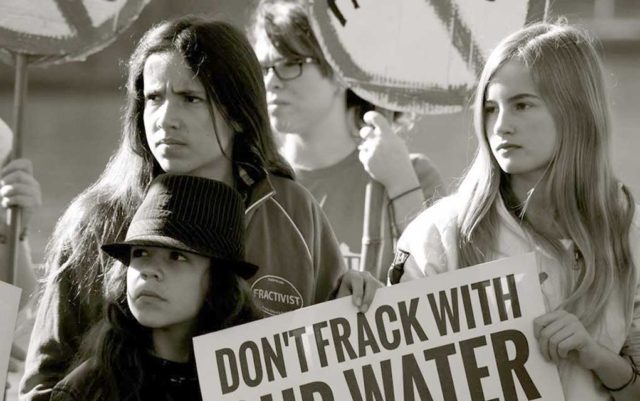 Back in November 2013, a group of Boulder-based young people petitioned the Colorado Oil and Gas Conservation Committee (COGCC) to suspend issuing permits for oil and gas exploration in the state until regulations could be put in place to adequately protect public health and safety and the environment. As part of the youth organization Earth Guardians, the young people asked the Commission to use the best available science to evaluate the impacts of oil and gas extraction, and allow an independent third party to verify annual reports on greenhouse gas emissions from such operations.

When the COGCC rejected this request in April 2014, the young people didn’t back down or give up. They’ve now taken their fight all the way to the Colorado Court of Appeals, which will hear oral arguments in their case against the COGCC on Tuesday, Feb. 21 in Denver.

“I see the negative impacts that fracking has caused just in the state of Colorado and all over the country really,” says Aerielle Deering, one of the six young plaintiffs in the case. “I really think there needs to be some sort of action to stop it or at least make it more sustainable. And I haven’t seen that on the part of the state or the current administration.”

With help from Our Children’s Trust, a legal advocacy organization, the young people are making their argument based on the “public trust doctrine,” which is founded on the principle that natural resources, including the atmosphere, must be preserved for future generations.

The COGCC rejected the petition, stating that the its regulations already address the petitioner’s concerns as they work in tandem with the Colorado Department of Health and the Environment when enacting regulations. Moreover, on advice from the state attorney general’s office, the Commission said the public trust doctrine is inapplicable to their rulemaking procedures, regardless of their charge from the state to foster oil and gas development “in a manner consistent with protection of public health, safety, and welfare, including protection of the environment and wildlife resources.” This charge was given to the COGCC as part of the Oil and Gas Conservation Act. The young plaintiffs see a disconnect between the actions of the COGCC and its state-mandated mission due to the countless peer-reviewed studies that suggest the adverse effects of oil and gas extraction including fracking on public health and the environment.

“It’s super important that the Commission is interpreting its statutory authority and obligations properly and doing enough to protect public health and the environment,” says Nate Bellinger, staff attorney with Our Children’s Trust. “There’s a lot at stake to make sure that the Commission is doing its job properly.”

Although Denver District Court Judge J. Eric Elliff upheld the COGCC’s initial determination last February, the plaintiffs appealed his decision in April 2016 just ahead of the Colorado Supreme Court ruling in May of that year that found local fracking bans and moratoriums were unlawful because they went against the state’s goal of maximizing oil and gas production. While the Supreme Court’s ruling was seen as a major setback for the anti-fracking movement as a whole, it could turn out to actually be helpful to the Earth Guardian’s case.

“The [state] Supreme Court basically said that they don’t want a patchwork of oil and gas regulations across the state or bans in some places or moratoriums in other places,” Bellinger says. “That is essentially what these youth plaintiffs are seeking is statewide control over oil and gas development.”

Plus, the young people have a growing social movement behind them demanding environmental action on the local and state level in the wake of collapsing federal policies under the Trump administration. The day before the hearing, Feb. 20, Our Children’s Trust, Earth Guardians and the youth plaintiffs in the case will be marching at the state capitol to rally support for their cause. “A good amount of people are going to be out there on the streets and showing the wide range of support we have for this in all communities,” Deering says. Our Children’s Trust expect 500 people to show up at the march on Monday, and they hope to carry the momentum into the courtroom the following day.

“It’s important that we’re telling the people, the current ruling generation, that we’re not just going to let them take our future away from us,” Deering says, “that we’re going to fight for our future and our children and grandchildren’s future.”