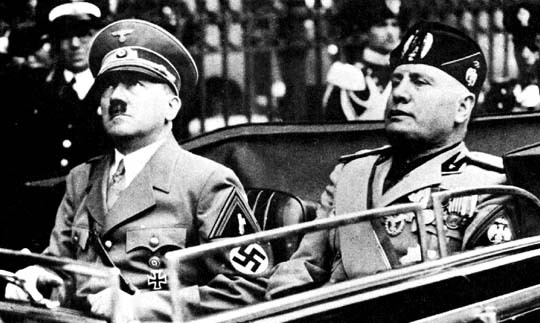 Donald Trump is the first major party presidential nominee to provoke widespread discussion about whether he is a fascist. It is a question raised by analysts across the political spectrum. Now that he is about to become the president, it might be helpful to consider how popular Benito Mussolini and Adolf Hitler were with rightwingers in America.

The first fascist movement to gain power was Mussolini’s Blackshirts in Italy in 1922. The New York Times, the wire services, the business magazines and the mass-circulation Saturday Evening Post treated Mussolini and fascism as “the saviors of Italy” from “the menace of Bolshevism,” according to John P. Diggins in his book Mussolini and Fascism: The View from America.

The Post serialized Mussolini’s autobiography (which may have been ghostwritten by the American Ambassador to Italy) and carried numerous pro-fascist articles (including one by humorist Will Rogers). Diggins notes that Anne O’Hare McCormick, the New York Times correspondent in Rome, “spent almost 20 years explaining to Americans the poetic beauties of the Italian landscape as well as the political beauties of Mussolini and Fascism.”

Editorial pages contained hosannas to the dictator. The Times called Mussolini’s 1922 coup “peculiar and relatively harmless.” The Chicago Tribune said fascism stood for “the most striking and successful attempt of the middle classes to meet the tide of revolutionary socialism.” The New York Tribune editorialized: “The Fascist movement is — in essentials — a reaction against degeneration through Socialistic internationalism. It is rough in its methods, but the aims which it professes are tonic… Mussolini is fighting for normalcy.”

In 1925, when Mussolini announced the formation of his “Corporate State,” the Times said that his conception of power and authority “has many points in common with that of the men who inspired our own constitution — John Adams, Hamilton, and Washington. The uninformed will of ‘the many’ is to be ‘balanced’ by the experience and the wisdom of ‘the few.’”

The business monthly Fortune came out with an entire edition lauding the “Corporate State.”

One of Mussolini’s greatest press admirers was William Randolph Hearst, whose newspaper chain the Italian government considered, in Diggins’ words, “the most favorable to the regime.” Hearst wrote in 1928 that “Mussolini is a man I have always admired, not only because of his astonishing ability, but because of his public service.”

In 1922, Alvin Owsley, commander of the American Legion praised Mussolini and added, “If ever needed, the American Legion stands ready to protect our country’s institutions and ideals as the Fascisti dealt with the destructionists who menaced Italy!”

“By taking over the government?” he was asked.

“Exactly that,” he said. “The American Legion is fighting every element that threatens our democratic government — soviets, anarchists, I.W.W., revolutionary socialists and every other ‘Red.’… Do not forget that the Fascisti are to Italy what the American Legion is to the United States.”

That statement is certainly true. Founded by Army officers in 1919, the Legion was similar to the many European veterans groups at that time, which supplied members for fascist parties and counter-revolutionary militias. Legionnaires were notorious for assaulting leftists, breaking up strikes and driving organizers of the Industrial Workers of the World (IWW) out of town.

In 1924, Adolf Hitler was put on trial for his abortive Munich Beer Hall Putsch. The vice president of the Bavarian parliament testified that the German Nazi movement was partially financed by American car manufacturer Henry Ford. Later, former Nazi agent Kurt W. Luedecke would write that he travelled that year to the United States to obtain funds from Ford for Hitler.

Hitler had a large portrait of Ford hanging above his desk, according to the New York Times (Dec. 20, 1922). He told a Times reporter, “We look on Heinrich Ford as the leader of the growing Fascisti movement in America.’”

The Nazis promoted a book called The International Jew, which consisted of articles that had appeared in The Dearborn Independent, a newspaper owned by Ford and distributed largely through his auto dealerships. The articles were based upon The Protocols of the Elders of Zion, which was a hoax document created by the Russian Czarist secret police. It claimed to be the proceedings of secret meetings of leaders of world Jewry conspiring to take over the world.

William E. Dodd, who was FDR’s Ambassador to Germany from 1933, when Hitler rose to power, until 1937, said “certain American industrialists had a great deal to do with bringing fascist regimes into being in both Germany and Italy.”

In addition, Dodd warned that, “A clique of U.S. industrialists is hell-bent to bring a fascist state to supplant our democratic government, and is working closely with the fascist regimes in Germany and Italy.”

That was a long time ago. But is history repeating itself today? Donald Trump is allied with far right quasi-fascist parties in Europe which are gaining  popularity. Ironically, this time the far rightists are allied with Russia and are hostile to the German government.

Nevertheless, Trump isn’t Hitler and the U.S. isn’t the Weimar Republic. But we are facing the biggest challenge to democracy in our lifetimes.