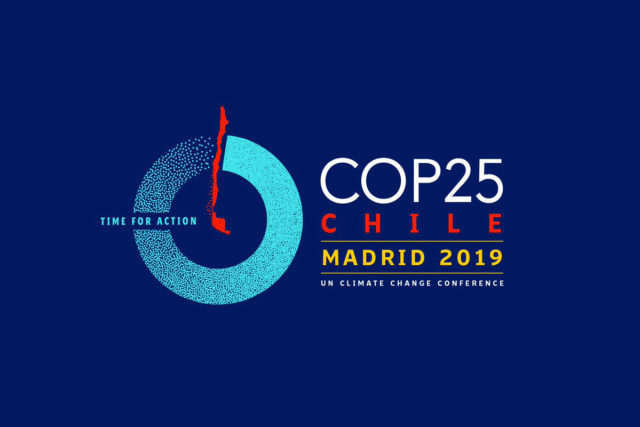 That’s the headline on a press release issued last week by the World Meteorological Organization (WMO) reporting that carbon dioxide levels in the atmosphere had reached a record high last year.

In 2015, the globally averaged levels of CO2 crossed the 400 ppm benchmark. The WMO called it a “symbolic and significant,” event. CO2 levels in the atmosphere have been going up by more than 2 ppm a year for a decade.

The amount of CO2 in the atmosphere varies day to day. Last May, atmospheric CO2 concentrations measured at the Mauna Loa Observatory in Hawaii set a one-day record of of 415.26 ppm, the highest since CO2 measurements began in 1958. And the highest it has been in the 3 to 5 million years since humanoid primates have been around, according to a post from Oil Change International, a climate activist website.

So, another year, another record.

And here’s one from a couple weeks ago:

And here’s one more:

Meanwhile at the U.N. Climate Change Conference in Madrid, they were setting new records for climate Chicken-Little-ing and political disingenuity.

“The point of no return is no longer over the horizon. It is in sight and hurtling toward us,” U.N. Secretary-General António Guterres warned Sunday, Dec. 1.

“Do we really want to be remembered as the generation that buried its head in the sand, that fiddled while the planet burned?” he asked.

But — good news — it is not too late to keep the average global temperature rise to 1.5 degrees Celsius by the end of the century, instead of the 3.2 degrees C we’re currently headed for. All we have to do, according to a U.N. report, is cut CO2 emissions by 7.6 percent every year between 2020 and 2030. (Which is a five-fold increase over what some 200 signatories of the Paris Climate Accord promised to do and aren’t doing.)

Another year, another record — every year for the next 10, in other words.

But “there is no sign of a slowdown, let alone a decline, in greenhouse gases concentration in the atmosphere despite all the commitments under the Paris Agreement on Climate Change,” said World Meteorological Organization Secretary-General Petteri Taalas.

In 2018, global CO2 emissions from all sources — everything from your tailpipe to cow farts and volcanos — reached 55 billion metric tons (tonnes). It’s expected to rise by another 0.6 percent this year. Another year, another record.

It doesn’t matter how many “binding” resolutions are passed at COP25, or how many days Greta Thunberg cuts class. That ain’t gonna happen.

The world’s carbon dioxide output is not going to be cut by 4-plus gigatonnes in 2020. Not while the world’s population is growing by 80-plus million a year, and its motor vehicle fleet is growing by 70-million plus a year, and the People’s Republic of China, which currently burns 9-billion plus tonnes of coal a year, is building another 120 coal-fired power plants.

And, most important, not while most of the world attaches a higher priority to economic growth than environmental protection. The Chinese and Indians know that the price of raising their standards of living to Western levels will be rising sea levels, hotter summers, more extreme storms and worse. They are willing to pay the price.

There is no chance that world CO2 emissions are going to go down by 2030, and most of the COP25 attendees know it. They know the world is going to get hotter between now and 2100. They also know it is not going to burn up. They also know that future generations will adapt to it (and would probably be outraged at the prospect of having to re-adapt to a cooler one.)

They know that the world will ditch fossil fuels when the alternatives offer superior performance and price, which they are showing every sign of doing, and not before. They know that in the past year attempts to raise the price of fossil fuels caused violent mass protests in France and Iran.

They know that when it comes to The Children, virtually everyone on the planet who has them will put the needs of the ones they have ahead of the needs of those who will be born 100 years from now.

The COP25 climatistas know all of these things. The world might take them more seriously if they were less shrill and more candid.