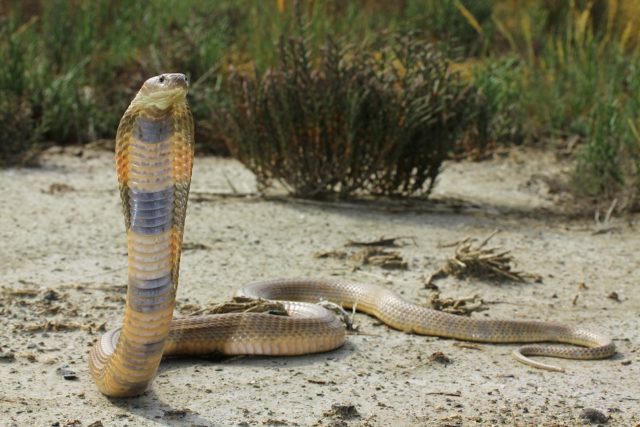 On March 23, during one of his daily reelection campaign rallies, aka Coronavirus Task Force press briefings, Donald Trump stated, “We can’t have the cure be worse than the problem.” At the time this statement was made, there were just 556 reported COVID-19 deaths in the U.S., and Trump’s politically motivated calculation was that the “cure” of social distancing would prove to be worse than the “problem” of a crashing stock market, high unemployment and an economic recession that could mortally wound his reelection prospects.

Certainly unbeknownst to someone who can barely read from a teleprompter, there is a phenomenon, known as the “cobra effect,” which refers to the unintended and undesirable consequences of a decision or policy. The term was coined during the time of British rule in colonial India (1858-1947), when there was a concern about the enormous population of venomous cobras. The solution that was implemented was a bounty for every dead cobra, which unexpectedly led to an increase in the breeding of cobras and, consequently, a rise in the cobra population.

It turns out that President “Chauncey Gardiner” had stumbled upon and parroted something he heard on Fox News that our politically correct obsession with containment or social distancing has utterly failed to calculate. For Trump and those whose political house of cards is built on maintaining a grasp on power that would make Charlton “Cold Dead Hands” Heston proud, the cobra effect is myopically defined as an economic recession resulting in a Democratic victory in the 2020 election. For the rest of us, the venom will take a more complicated form: business closures, bankruptcies, rampant inflation, suicides, depression and other psychological issues, loss of freedom and a host of other horrible consequences, many of which will be as permanent as the loss of life our containment protocol is intended to prevent, and may, ironically, wind up exacerbating.

Flying under the radar of our social distancing hysteria is a different model to eradicate the coronavirus, called herd immunity, which is favored by many renowned epidemiologists. Essentially, herd immunity advocates posit that the only way to defeat a disease like COVID-19 is for a sufficient portion of the population — most cite 60% — to have been exposed to the disease in order for it to begin to disappear. Many experts assert that in the absence of a vaccine, which will most likely not be available for 12 to 18 months, we must achieve herd immunity in order to gain the upper hand on this virus.

But here’s the catch: Social distancing by design necessarily delays the achievement of herd immunity by limiting the numbers of individuals who have been exposed to the virus, thereby maintaining a greater portion of the population who can continue to contract and spread the disease. In short, the result of our efforts to “flatten the curve” via containment will be a lengthening of that curve, which, according to Harvard researchers Marc Lipsitch and Yonatan Grad, may ultimately lead to increased numbers of infections and deaths in the long term. If these Harvard professors are correct, our current containment efforts may be giving new meaning to the term cobra effect. By adhering to strict social distancing we can achieve, at best, a temporary solution. But we do so by delaying the permanent solution of herd immunity, thereby dragging this ordeal out over a longer-than-necessary period of time, with repeated resurgences of cases each time we relax containment efforts, and perhaps leading to even greater numbers of fatalities.

Whether the containment approach is the best option or not, we have probably gone too far down Social Distancing Avenue to turn back. But we must understand that by doing so we have painted ourselves into a corner from which there are only undesirable paths outward. With enormous pressure to reopen businesses, it is likely that we will soon see a relaxing of containment efforts, followed by an uptick in cases, leading to another round of restrictions, resulting in more financial hardship and other undesirable consequences. Most notably, it is widely anticipated by the medical community that we can expect a dramatic rebound of infections during the coming fall season. Ultimately, this cycle will only end when we have achieved the requisite herd immunity.

What is likely to accompany such a cycle is testing and surveillance on a scale we have never seen before. One such plan, put forward by the progressive, nonprofit, nonpartisan Center for American Progress, would require every American to download an app onto their smartphone, which would utilize geo-tracking technology to identify individuals who have come into contact with anyone who is subsequently found to have the virus, leading to a period of mandatory quarantine. This dystopian loss of personal freedom makes the post-9/11 Patriot Act look like child’s play. And given the lack of trust the majority of Americans have in our government, it is nearly impossible to imagine the success of such a plan.

With respect to the mass testing option, it would be necessary for everyone in the country to be tested every 14 days, and for anyone testing positive to be quarantined. Even if the logistic hurdle of 23 million tests per day could be accomplished, how could the necessary compliance be guaranteed? Clearly, there are no painless ways out of this predicament, but what is becoming increasingly obvious is that our best hope is herd immunity. And if that is true, what follows is that the draconian measures we are currently involved in are only delaying the inevitable, and most likely we are in the midst of the most dramatic example of the cobra effect in our lifetimes.

Given that herd immunity requires a minimum of 60% of the population to become exposed to and recover from the virus, it is likely that most of us are going to fall prey to it. The good news is that for the vast majority who are not in the high-risk category — the elderly and those with pre-existing conditions — the recovery rate is upwards of 98%, just as it is with influenza and other respiratory illnesses. Therefore, many epidemiologists propose that we redouble our efforts to protect the elderly and immunocompromised, while preparing the rest of us to contract and fend off this virus.

Which brings me to the subject of masks.

There are many factors in building and maintaining an immune system strong enough to handle a viral infection, but among them one cannot overemphasize the role played by our emotions. For most everyone, this crisis is among the most challenging periods in our lives, no matter how long we have been a resident of this shining ball of blue. We are all being tested to our cores in many ways, ranging from financially to spiritually, and we all have to decide for ourselves how to respond. Indeed, how we show up in this situation defines us, and may well be a determining factor in if and how badly we get sick.

This is, of course, a very personal matter, and each one of us needs to decide what feels right. Experience teaches us that approaching problems with courage and confidence leads to a better result than allowing fear and reluctance to rule the day. In the final analysis, while social distancing may prove to have been a necessary short-term solution, I would submit that we reach the point of diminishing returns when we allow our emotions to turn negative to such a degree that we wind up feeling afraid, suspicious and paranoid.

While I appreciate the need for masks among grocery store workers, health care practitioners, and in other settings where high-risk individuals might be infected, I do not see the need to wear a mask or facsimiles, such as bandanas and other homemade devices — the necessity or benefit of which is questionable — while recreating. People walking around, riding bikes, even driving cars wearing masks appear to be unhappy and afraid, and they cause the rest of us to feel the same way. This is emotionally antithetical to what we truly need right now: the optimism that we can successfully meet this challenge.

While I am still following the containment protocol — primarily because it is what we have decided to do (for now) as a culture — it is also my intention on an individual level to project a positive attitude of confidence. For this reason, and because I trust my ability as the successful result of 200,000 years of human evolution to survive being infected with this virus (although, trust me, I have no interest in contracting it), I have decided not to wear a mask outdoors. Instead, I greet others I pass (at a reasonable distance, of course) with a reassuring smile, as if to say, “Don’t worry, we’ll get through this.” To my way of thinking, this approach will be of greater value and contribute more to the collective effort than viewing every individual I encounter with suspicion as a potential subject of infection.

Only time will confirm whether we are in the midst of the latest, greatest cobra effect moment in history. But one thing is clear even at the tip of this iceberg: We must all engage in due diligence in availing ourselves of the facts of what we are dealing with, and allow our highest, most positive selves to emerge as we make the necessary decisions during the weeks and months ahead. In that sense, this is not merely a phenomenally perplexing crisis, but the greatest opportunity of our lives to discover who we are and what we are capable of.