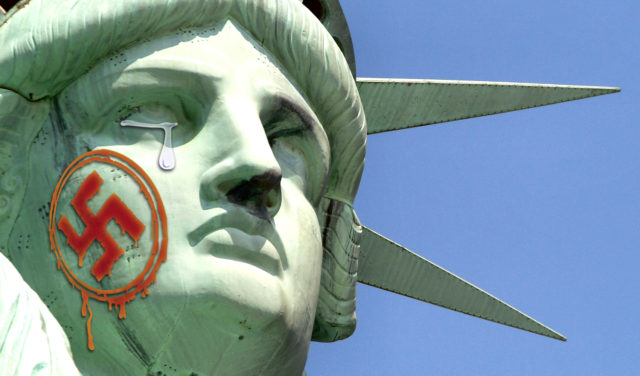 When White House press secretary Jen Psaki was asked about the Georgia GOP Congresswoman Marjorie Taylor Greene, she declined to offer any comment, saying that she didn’t want to “elevate conspiracy theories.”

What could she say? That President Biden isn’t a member of a Satanic cabal of cannibalistic pedophiles? That there’s no evidence that a California wildfire was caused by Jewish bankers using a secret laser from space? That the mass shootings at Sandy Hook Elementary School and Marjorie Stoneman Douglas High School really happened and weren’t phony publicity stunts with actors to promote gun control? The Republicans just appointed her to the House Education Committee.

New York Times columnist Nicholas Kristof said that a number of conservative childhood friends who live in his small Oregon hometown recently asked him if liberals were plotting to round them up and put them in “re-education camps.” They heard that on Fox News. A Wall Street Journal columnist asked, “If you were an enthusiastic Donald Trump supporter, are you ready to enter a re-education program?”

Kristof told his friends that wasn’t going to happen, and he was “stung that they felt greatly relieved to hear it.”

Think about it. They weren’t kidding around. His old friends were genuinely frightened. They were also told that they didn’t have to worry about the coronavirus and that mask mandates were a step toward tyranny. That Trump was re-elected by a landslide.

What would you do if you believed all of that? Maybe you would pick up a gun and…

Kill someone? Rep. Greene has supported the murder of prominent Democrats in speeches and on social media multiple times. That makes a lot of her fellow lawmakers somewhat nervous. Unfortunately, she isn’t a unique Republican lawmaker.

This situation is new. Are many Republicans now willing to normalize political violence to get their way? The party already benefits from a number of undemocratic structural advantages such as the Electoral College, gerrymandering and the filibuster. Republican-controlled state legislatures have also passed laws that suppress the votes of people who tend to vote for Democrats.

As a result, Democratic presidential candidates have won the popular vote in seven of the last eight elections but have become president only five times. Both the Democrats and the Republicans currently each have 50 votes in the Senate (with Vice President Harris having the tie-breaking vote), but the Democrats represent 41 million more voters than the Republicans.

“We’re not a democracy,” Republican Senator Mike Lee of Utah tweeted in the middle of last year’s vice-presidential debate. He said: “The word ‘democracy’ appears nowhere in the Constitution, perhaps because our form of government is not a democracy. It’s a constitutional republic…” Hours after the debate, Lee tweeted: “Democracy isn’t the objective; liberty, peace, and prospefity [sic] are. We want the human condition to flourish. Rank democracy can thwart that.”

In an essay on the Jan. 6 Capitol Hill insurrection, Yale historian Timothy Snyder said that the biggest group of Republicans are people he calls “the gamers” who work the system with voter suppression, gerrymandering and dark money.

Now there’s a smaller faction made up of people like Trump, Ted Cruz and Josh Hawley who he calls “the breakers” who are willing to come to power by brazenly dictatorial means such as mob violence and overturning an election and lying about it.

Snyder said: “Thanks to technological capacity and personal talent, Donald Trump lied at a pace perhaps unmatched by any other leader in history. For the most part these were small lies, and their main effect was cumulative.”

But when Trump said he had won the election, it was a big lie. Snyder explained: “To make sense of a world in which the 2020 presidential election was stolen requires distrust not only of reporters and of experts but also of local, state and federal government institutions, from poll workers to elected officials, Homeland Security and all the way to the Supreme Court.”

Many on the right consider a one-person-one-vote democracy to be a threat. At a gathering of evangelicals in 1980, Paul Weyrich, a GOP strategist and a co-founder of the Heritage Foundation, asked, “How many of our Christians have what I call the ‘goo-goo syndrome’? Good government. They want everybody to vote. I don’t want everybody to vote. Elections are not won by a majority of people. They never have been from the beginning of our country, and they are not now. As a matter of fact, our leverage in the elections quite candidly goes up as the voting populace goes down.”