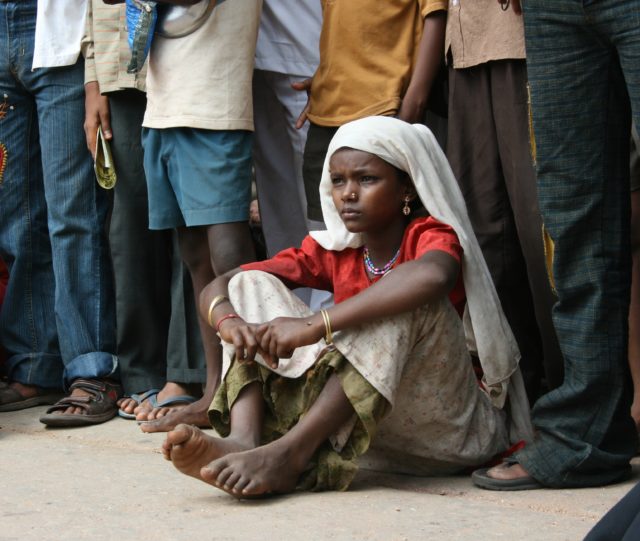 The world is facing the prospect of “climate apartheid,” where “the wealthy pay to escape overheating, hunger and conflict while the rest of the world is left to suffer,” according to a report by Philip Alston, the United Nations special rapporteur on extreme poverty and human rights.

He warns of responding to climate change with an “over-reliance on the private sector.” As an example, he cited something that has already happened: “When Hurricane Sandy wreaked havoc on New York in 2012, stranding low-income and vulnerable New Yorkers without access to power and health care, the Goldman Sachs headquarters was protected by tens of thousands of its own sandbags and power from its generator.”

This is a civilizational upheaval. Alston says, “Climate change threatens to undo the last 50 years of progress in development, global health and poverty reduction… Yet democracy and the rule of law, as well as a wide range of civil and political rights are every bit at risk. The risk of community discontent, of growing inequality, and of even greater levels of deprivation among some groups, will likely stimulate nationalist, xenophobic, racist and other responses.”

Alston continues, “Maintaining a balanced approach to civil and political rights will be extremely complex.”

Alston also consolidated the findings of more than 100 reports and scientific studies to demonstrate that climate change is threatening the basics of food, water, health and housing for hundreds of millions of people around the planet. Developing countries will bear approximately 75 percent of the costs of climate change, the report noted, even though the poorest half of the world’s population contributes just 10 percent of global carbon emissions.

He is critical of the “patently inadequate” steps taken by nation states, businesses, NGOs and even the UN, noting that they are “entirely disproportionate to the urgency and magnitude of the threat.” Alston doesn’t criticize Donald Trump for being ineffective in combatting climate change but for actually making things worse. He said Trump “has placed former lobbyists in oversight roles, adopted industry talking points, presided over an aggressive rollback of environmental regulations and is actively silencing and obfuscating climate science.”

Alston says there needs to be “deep structural changes in the world economy… A robust social safety net will be the best response to the unavoidable harms that climate change will bring.” He stressed that “(t)his crisis should be a catalyst for states to fulfill long ignored economic and social rights, including to social security and access to food, health care, shelter and decent work.”

Alston is right to stress that you have to fight for economic and social justice at the same time as you combat climate change. That is the message of the Green New Deal (GND) resolution in Congress introduced by Rep. Alexandria Ocasio-Cortez and Sen. Ed Markey. The bill ties a green energy transition to a demand for full employment. It calls for the creation of “high-quality union jobs that pay prevailing wages, adequate family and medical leave, paid vacations and retirement security for all people of the United States.” It also supports ending restrictions on unionization and collective bargaining.

This is a great beginning. The GND isn’t a policy proposal but a set of principles that will guide the drafting of policies. Unfortunately, the American Federation of Labor and Congress of Industrial Organizations’ (AFL-CIO) Energy Committee released an open letter to Ocasio-Cortez and Markey criticizing the proposal on the grounds that it “could cause immediate harm to millions of our members and their families.”

The GND proposes to “achieve net-zero greenhouse gas emissions through a fair and just transition for all communities and workers.” However, some workers are skeptical about renewable jobs, saying renewable energy firms have been less generous than the oil and gas industry on wages. They have good reason to be concerned. Activists in the labor movement say there never has been an actual “just transition.” For example, when new environmental regulations promoted low-sulfur mining, Appalachian union mines closed down and non-union surface mines started up out West. Communities in Appalachia suffered a great deal and then the coal companies filed for bankruptcy and stopped contributing to health care and pension funds.

Joe Uehlein, a lifelong union member who is an environmental activist, founded the Labor Network for Sustainability (labor4sustainability.org), which builds bridges between the labor and environmental movements. He says climate change is the real job killer, not the GND.

He argues that the GND’s federal jobs guarantee “is the best way to tighten labor markets, which then forces wages and benefits up because companies are competing to get the best workers. That allows unions then to do their core function the best, which is negotiate good contracts that ripple through the economy.”

We don’t have too much time to save the world. The Green New Deal is a tremendous opportunity to do that. In the process, we can also create a new world.

A new reality for Israelis, Palestinians and U.S. politics